How will Egypt spend its $12B from the IMF?

The IMF has approved a $12 billion loan, but how will the Egyptian administration spend this amount, amid allegations of the misuse of previous Gulf loans. 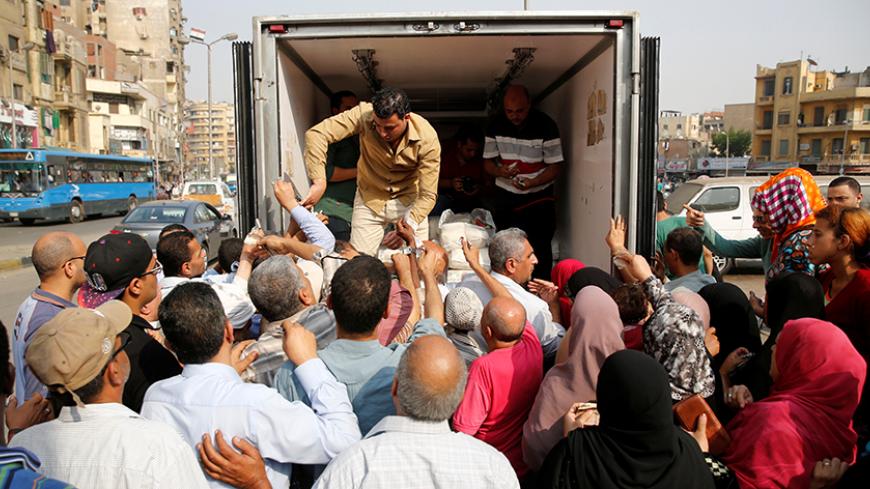 Egyptians push to buy subsidized sugar from a government truck after a sugar shortage in retail stores across the country, Cairo, Oct. 14, 2016. - REUTERS/Amr Abdallah Dalsh

CAIRO — On Nov. 11, the executive board of the International Monetary Fund (IMF) approved a three-year extended arrangement under the Extended Fund Facility to give $12 billion to Egypt to support the economic reform program developed by the Egyptian authorities.

Under the arrangement, $2.75 billion will be disbursed immediately and the remaining amount will be phased over the duration of the program, subject to five IMF reviews.

The economic reform program announced by the government in agreement with the IMF aims to gradually lift subsidies on energy, water and electricity, reduce the budget deficit, cut public spending, restrict allocations for social justice in the new budget and impose new taxes on citizens to increase revenue.

The IMF said in its Nov. 11 press release that the loan mainly aims to reduce the state budget deficit and provide protection for low-income households. Egypt’s budget deficit for 2015-16 stood at 12.2% of the gross domestic product, and the objective is to reduce it to 8.5-9.5% in 2016-17.

The finalization of the IMF deal and the disbursement of the first tranche triggered questions by economic experts about the fate of the received funds.

Will the funds be used to boost the Egyptian economy, reduce the budget deficit and provide social protection for the poor, or will they have the same fate as the billions obtained by Egypt from the Gulf states in 2013 against the backdrop of the June 30 protests and the downfall of the Muslim Brotherhood?

Indeed, after the ousting of the Muslim Brotherhood, Gulf aid flowed to Egypt in the form of grants, loans and bank deposits to help the new regime revive the Egyptian economy and rebuild the state.

On March 2, 2016, Egyptian Investment Minister Ashraf Salman said during a conference on investments in Egypt and the Middle East held in Dubai, “The total financial aid obtained by Egypt from Saudi Arabia, the United Arab Emirates and Kuwait within 18 months after the fall of the Muslim Brotherhood on July 3, 2013, amounted to $23 billion in the form of cash grants, oil shipments and deposits at the Egyptian Central Bank.”

During the conference, Salman asserted that Egypt benefited from this support by implementing reform and structural economic measures to improve the investment environment and attract foreign investments in a bid to rebuild the deteriorating national economy.

He explained that Egypt is still reeling under economic hardships with citizens suffering meager living conditions, especially among low-income households.

A statement issued on July 26 by the Central Agency for Public Mobilization and Statistics, a government entity, said that the poverty rate in Egypt is 27.8%.

On Oct. 12, Abdul Khaleq Abdullah, a political science professor at United Arab Emirates University and adviser to Sheikh Mohammed bin Zayed Al Nahyan, the crown prince of Abu Dhabi, posted on his Twitter account, “Egypt received today a $2 billion deposit from Saudi Arabia, and it's time to ask how all this Gulf aid is being spent in Egypt. We want a reasonable, calm and convincing answer.”

In a bid to tame citizens’ fears regarding the misuse of the IMF loan funds and the failure to allocate them for the advancement of the Egyptian economy and improvement of living conditions, the Information and Decision Support Center (IDSC) attached to the Egyptian Cabinet issued a press statement Nov. 17 denying all rumors about the government’s inclination to allocate the IMF loan first tranche to pay off the debts to foreign oil companies of $3.2 billion or to pay off other debts.

The IDSC said it contacted the Ministry of Finance that confirmed the $2.75 billion first tranche from the IMF will be allocated to support the state budget and protect low-income citizens and will not be used to pay off any debts, as some have claimed.

However, Rashad Abdo, an economist and the head of the Egyptian Forum for Economic Studies, told Al-Monitor, “The IMF had asked the Egyptian government to pay off its debts to foreign oil companies from the loan funds, which means that part of the IMF loan will extinguish the state debts and the other part will increase the country’s foreign reserves that had hit rock bottom in the past days, dropping to around $15 billion.”

He added, “Egypt received billions of dollars from the Gulf states, in the form of loans, deposits and grants to support the Egyptian economy and help overcome the critical stage following the rule of the Muslim Brotherhood, especially after the decision to disperse the sit-ins in Rabia al-Adawiya and al-Nahda squares, as cash reserves increased by 10% as a result of financial aid flowing from Saudi Arabia, the United Arab Emirates and Kuwait.”

Abdo said, “Unfortunately, the Egyptian citizen did not feel any change after the Gulf aids. Remittances sent by Egyptians abroad fell excessively as of 2015 amid a deteriorating tourism situation after recent repeated security incidents in Egypt. This is in addition to the drop in Suez Canal revenues, which drained one of Egypt’s main sources of foreign currency revenues and led Egypt to withdraw money from its foreign cash reserves to buy commodities and import the necessary petroleum products. Consequently, Gulf grants became insufficient to pay off debts and buy basic living goods to the point that citizens felt that Gulf aid funds were squandered without any benefits for them.”

He said, "I think the Egyptian citizen will not be seeing a tangible change in the near future, even after the IMF loan. Nations are not built by grants and loans. To build the Egyptian state, we must boost production, set an appropriate investment environment and restore international confidence in the Egyptian economy. Otherwise, no financial aid, whether Gulf loans or IMF facilities, will redress Egypt’s economy, and the ordinary citizen will not feel any change or improvement in his standard of living.”