Abdel Fattah al-Sisi hopes that more Gulf aid will convince Egyptians he can deal with their country's economic troubles, but some are skeptical. 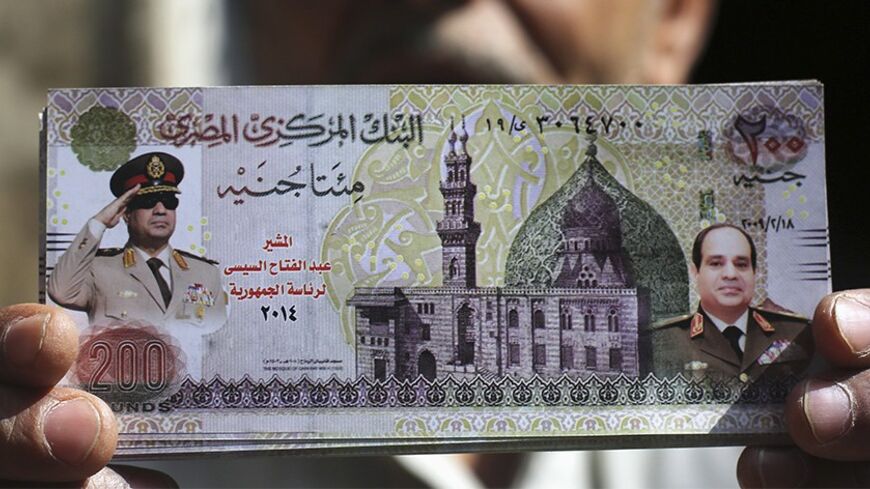 CAIRO — At a time of crisis for the Egyptian economy, Abdel Fattah al-Sisi, the strongest candidate in the upcoming presidential elections, has begun formulating his electoral program amid promises of substantial financial support from the Gulf.

Following months of delay and popular demands that he submit his candidacy for the presidency, Sisi finally resigned from his post as commander-in-chief of the armed forces March 26 in anticipation of running in the presidential elections scheduled for May.

Sisi, who led the overthrow of President Mohammed Morsi last July, is facing a range of challenges that might put him in an awkward position with his base, which hopes he will solve the deteriorating economic situation. These high hopes led Sisi to emphasize, in his resignation speech, that he did not “possess miracle cures.” He did not mention his economic reform policy.

“The Egyptian economy is suffering from crushing crises that all governments that came to rule after the January revolution were unable to contend with, despite announcements pertaining to a number of strategies aimed at raising the efficiency of the country’s economy,” Sharif Jaballah, an economist and researcher at Al-Ahram Center for Political and Strategic Studies, told Al-Monitor.

“The real challenge facing Sisi will be to achieve palpable progress in solving the economic problems, in a manner that would directly impact the lives of Egyptian citizens, instead of merely proposing plans and policies,” he added.

According to the draft budget — under which three successive governments functioned, starting with the Hisham Qandil government and followed by the Hazem el-Beblawi government and finally the Ibrahim Mehleb Cabinet — the state’s rate of economic growth continued to significantly decline. This rate fell from 5.1% in 2010 to 2% during the two previous fiscal years, with economic performance and growth decreasing far below the minimum level required to boost economic production and activity, leading to the rise in the official unemployment rate to 13% by the end of 2013.

Since its formation in March 1, the Mehleb government has been endeavoring to draft a new general budget for 2014-2015 that would govern the economic policy of the next president and his Cabinet. Preliminary indications suggest it will be Egypt’s largest budget ever at $114.9 billion.

Al-Monitor spoke with Finance Minister Hani Qadri on the sidelines of the economic meeting on March 24. He said, "We are trying to reduce the budget deficit to 10% by the end of this fiscal year in June. The state may rely on foreign aid to reduce the deficit and cover domestic needs until the end of the current year.”

Egypt received Gulf aid estimated at $10.93 billion, some of which was deposited with the Central Bank, with other portions being used to import fuel. The Egyptian government used this aid to open additional state budget appropriations — to the sum of 29.7 billion Egyptian pounds ($4.26 billion) — needed to deal with pressing issues and to satisfy the demands of low-income earners. This was done by allocating a portion of the amount to bolster wages, purchase goods and services, as well as provide social grants and pay overdue state contractor wages. In addition, some of these funds were used to back public housing projects and buy 600 public transport buses, which helped the government appease public opinion and resolve pressing economic issues.

An Egyptian diplomatic source told Al-Monitor that Cairo is expecting more Gulf aid to help stabilize a potential Sisi presidency, saying, “We expect to receive generous Arab Gulf aid after the next presidential elections, and this aid is primarily tied to a victory by Field Marshal Sisi.”

The source, who is involved in managing Egyptian-Arab relations, explained, “The aid will come from Saudi Arabia and the United Arab Emirates in support of [Sisi’s] positions, and to encourage him to run after a period of hesitation resulting from his fear of not being able to deal with the economic problems and growing public demands, engendered by the state’s lack of resources. The change of the political map in Saudi Arabia will not greatly impact its relations with Egypt in the coming period. The kingdom still considers Egypt to be the Arab Gulf’s guardian, on a political and security level.”

“At the beginning of his term, the next president will have no choice but to rely on Gulf aid. This aid will serve to confront the urgent crises revolving around paying state employee salaries, as well as solving the energy crisis and guaranteeing the availability of foreign currencies needed to purchase foodstuffs, in order to prevent a public outcry against the president at the beginning of his reign. Yet, one should avoid relying on this financial aid for long, and instead adopt domestic policies aimed at increasing the state’s domestic resources without relying too much on outside sources,” Abdel Azim told Al-Monitor.

The Egyptian Cabinet, in which Sisi was a member, proposed a series of economic policies that the next president will benefit from. Prime Minister Mehleb told reporters in a March 20 conference attended by Al-Monitor that a huge 10 billion Egyptian pound ($1.4 billion) project encompassing 4,700 Egyptian villages will be inaugurated to help the next president confront the problem of unemployment.

Prior to submitting his resignation from the Ministry of Defense, Sisi tried to encourage the adoption of projects that would serve a wide swath of Egyptians, such as one to build one million low-income housing units at a cost of $40.2 billion in cooperation with the UAE’s Arabtec, on land donated by the armed forces and with the UAE providing initial project financing.

Al-Monitor spoke to Egyptian Minister of Planning Ashraf al-Arabi, who said, “We are now working pursuant to a three-year economic plan primarily aimed at raising growth rates to 5% by 2017 at the latest.”

Arabi, who signed three international agreements for soft loans during the last week of March, added, “Most of the loans will be used to bolster the energy sector and cover pressing needs.”

Economic indications and expectations still forecast that Sisi, should he win the presidential elections, will be unable to find radical and final solutions. This inability might greatly impact the popularity that he gained following the ouster of Morsi and increase the popular anger resulting from, among other issues, the current economic crisis.