As the price of oil continues to decline, Egypt stands to both gain and lose: It will save in petroleum subsidies while the job market for Egyptian oil workers in the Gulf, a significant source of remittances, will decline. 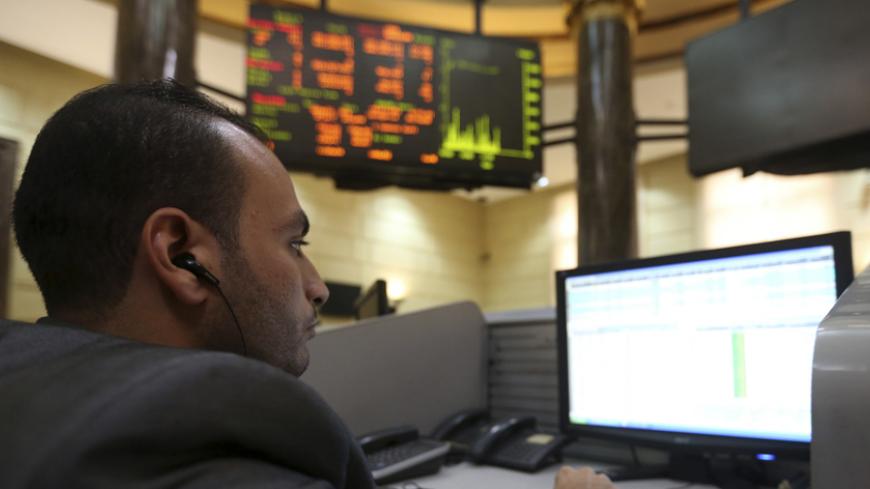 Egyptian economists are watching the decrease in oil prices with satisfaction and anticipation. Their satisfaction comes from the decrease, meaning a drop in the Egyptian budget deficit, because petroleum products were subsidized by the state to the value of 100 billion Egyptian pounds ($14 billion) during the fiscal year 2014-15. As for the anticipation, the drop will indirectly benefit the Egyptian workers in the Gulf, who are estimated to account for two-thirds of Egyptian workers abroad. Remittances from Egyptians abroad form one of the most important hard currency resources in the country.

There are also concerns about the negative repercussions on the economy of the Gulf oil states supporting Egypt, as well as concerns about the vulnerability of the Egyptian tourism industry, which recently started to recover after instability had damaged the sector.

Former Minister of Economy Sultan Abu Ali told Al-Monitor that the decline in oil prices has a direct positive impact on the Egyptian economy, namely the reduction of the cost of petroleum derivatives. He said, “Egypt has become a net importer of oil. Thus, any decline in world oil prices [means] a lower burden of energy imports.”

He added that there are also indirect negative effects as economies of the Gulf oil states, particularly Saudi Arabia and the United Arab Emirates, which have been strongly supporting the Egyptian economy, will be strongly negatively affected. Their state budgets will take a hit, making these countries less able to maintain their foreign economic support. The demand for Egyptian labor and the Egyptian workers' remittances, by extension, will also drop.

Abu Ali pointed out that tourism will be negatively affected, especially Russian tourism. However, the Russian expenditure in the Egyptian tourism sector is relatively small.

Abu Ali also explained that the continued lowering of oil prices depends on supply and demand. On the supply side, Iraq's large exports, the United States' use of modern technology to extract oil from rocks and the failure by the Organization of Petroleum Exporting Countries to reduce production in accordance with the falling prices are all factors that led to an increased supply. As for the demand side, the economies of European countries are suffering from low growth rates and recession. Thus, the demand for oil is low, and plans to stimulate European economies will impact oil prices.

For his part, former Prime Minister of Egypt Ali Lutfi confirmed to Al-Monitor that the decline in oil prices is working in favor of the Egyptian economy for two reasons. First, subsidies for petroleum products are being reduced to almost half the general budget. Second, there is decreasing pressure on the foreign exchange reserve, which is suffering from a severe outflow, as the dollars needed to buy oil will be reduced by almost half.

Lutfi pointed out that Egypt did not cut petroleum product prices for citizens following the global drop in oil prices, unlike some countries such as Jordan, as Egypt offers a greater amount of oil subsidies and the state is suffering from a large budget deficit. He rejects the idea that the Gulf states will reduce their support for Egypt, because this support was intended for a limited period. It is impossible for it to last forever, and Lutfi said that Egypt must rely on itself and not on others.

He added that the impact on the tourism sector will be limited, as Egyptian tourism has begun to recover on its own, according to statements made by Minister of Tourism Hisham Zazou, who confirmed that the sector has seen the number of visitors rise to 12 million tourists.

Petroleum and Mineral Resources Minister Sherif Ismail said in a Dec. 22 press statement that the decline in world oil prices recently is expected to lead to a decline in subsidies for petroleum products during the second half of the fiscal year of 2014-15 if oil prices continue at current levels.

He pointed out that the total subsidies on petroleum products in the 2014/2015 budget amount to about 100 billion Egyptian pounds, and this means that a limited amount will be saved during the first half of the fiscal year as the drop in the global oil prices began in November and the global oil prices were at high levels previously. If the decline in world prices continues through the second half, the total support for petroleum products is estimated to decrease by about 30 billion pounds ($4 billion) over the entire fiscal year and dip to about 70 billion pounds ($10 billion).

Ismail stressed that despite the savings, the state will continue to spend a large sum, the value of subsidies in one year. He indicated that the total expected decrease in subsidies will not immediately be translated into liquidity in the oil sector and the Treasury because some sectors will still have problems settling the price of petroleum and natural gas products.