Security is tight in Egypt’s state institutions, but neglect is slowly destroying the country’s rich heritage as archaeological sites lack trained and armed security guards to protect them from terrorists and looting. 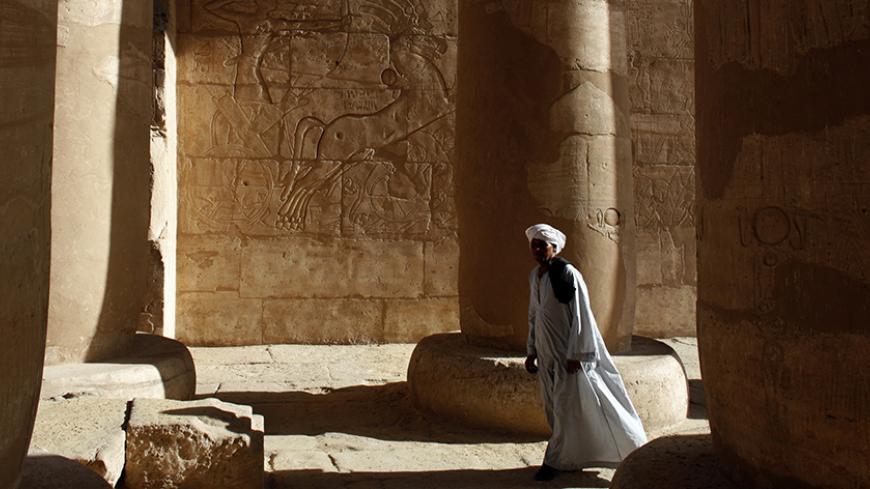 A local Egyptian man, employed as a guard to help oversee the site, stands in the Ramses II memorial temple in Luxor, Dec. 4, 2008. - REUTERS/Goran Tomasevic

When walking next to vital institutions or ministries in Egypt, one will notice they are surrounded by armored vehicles, tall walls and razor wire out of fear of terrorist infiltration. Yet, when walking by any of Egypt’s archaeological sites, one will find only one or two of the Ministry of Antiquities’ guards tasked with securing the sites that date back to early Egyptian civilization and contain priceless archaeological treasures.

The difference is clear.

Officials in Egypt speak of the importance of cultural and civilizational heritage, and their ability to preserve it and protect it from thieves. Yet the weak security provided by the Antiquities Ministry is obvious.

Izzat Hassan, a guard affiliated with the ministry’s security department and who works at the Malawi National Museum in the Upper Egypt city of Minya, explained to Al-Monitor how he is unable to secure the antiquities within his jurisdiction. Nearly 1,000 artifacts were looted at the museum during the Jan. 25 revolution against former President Hosni Mubarak’s regime.

“The thieves broke into the museum and looted all of the antiquities that we were protecting. We could not confront them because we did not have powerful weapons to deter them and they had machine guns and automatic rifles,” Hassan said.

“We were not armed well enough or trained to deal with thugs and outlaws, even though the residents of upper Egypt are greedy for our artifacts. For them, the artifacts trade is more profitable than the arms and drugs trade.”

The plundering of the Malawi Museum is not the first or the last looting of Egypt’s antiquities. The​​ Dahshur archaeological site in the Giza governorate — Egypt’s second-largest governorate — has been subjected to flagrant thefts and abuses by the residents, in the absence of any interference by the state. The residents are building homes on the archaeological cemeteries and looting their contents at night.

The Dahshur site includes the Red Pyramid, Egypt’s first fully constructed pyramid, and the Bent Pyramid. The site was added to UNESCO's World Heritage list in 2009. Yet looting there is organized and persistent.

Wahiba Saleh, a senior inspector at the Dahshur site, told Al-Monitor that security staff there are only equipped with 9 mm pistols and often confront thugs carrying automatic rifles or machine guns.

“The Dahshur site extends over 20 kilometers [12.5 miles] and there are only 10 guards to secure it, which means that each is required to guard 2 kilometers [1.2 miles]. How could it be possible?” she asked.

Saleh said guards at the site are paid a monthly salary of no more than 400 Egyptian pounds ($52), while they are required to protect priceless antiquities. She demanded that the ministry raise their salaries, increase their number to no less than 40 people to secure the site, train them and arm them to confront saboteurs and outlaws.

There are hundreds of violations and unauthorized construction projects on the archaeological site, she said, and though the ministry issued directives to remove them, the orders have yet to be implemented. She added, “The state is preoccupied with securing its vital institutions and confronting terrorist groups. It is not interested in securing the antiquities.”

Mustafa Kamal, a guard entrusted with securing the Egyptian Museum near Tahrir Square in Cairo, told Al-Monitor, “I saw many thieves who were trying to loot the museum, but I could not confront them out of fear of being imprisoned if I fired at any of them, as there is no law regulating our job, nor are there rules for the use of firearms against the attackers. The orders we have require us to arrest them and hand them over to the police.”

He asked, “How can we arrest them, when they carry automatic rifles and machine guns?”

During the revolution, looters stole 18 artifacts of the pharaohs of the Dynasty XVIII treasury from the Egyptian Museum, including some from the treasures of Tutankhamun, his father Akhenaten and grandfather Yuya.

Kamal added, “Following the Jan. 25 revolution, the Ministry of Antiquities decided to provide us with weapons to face the chaos that prevailed in the country and confront the attackers. It claimed that providing us with weapons would take place in several phases. It has already armed a number of us, but not all. When we demanded that all of us be provided with arms, [the ministry] said there are not enough weapons to arm all security personnel at the ministry!”

Like Saleh, Kamal said the 9 mm pistols that have been provided are inadequate against intruders armed with machine guns.

Kamal noted that the guards need to undergo medical tests before carrying a weapon. “Some of our colleagues suffer from heart disease and poor eyesight, and yet they carry weapons because of nepotism and bribes,” he said.

Khalifa told Al-Monitor, “The number of security personnel at the ministry is very small. We are seeking to increase this number in a significant way, but we do not have sufficient funds to hire new members.”

He confirmed that the central administration does not have enough weapons for its own security personnel, adding, "We are waiting for additional arms to come from the Interior Ministry.”

Khalifa concluded, “We have plans to secure the Egyptian antiquities in all parts of Egypt. We are currently training individuals to face the attackers and holding training courses inside the headquarters of the Antiquities Ministry."

The security system within the Ministry of Antiquities is suffering major problems because of the security sector’s neglect in training the ministry’s security guards. The security forces in Egypt are generally unaware of the importance of Egypt’s cultural and civilizational heritage, because of the low level of education within the security institution. Meanwhile, only a limited budget is allocated to the guards in charge of the archaeological sites’ security, and there is not enough funding to train, educate and arm them. The Ministry of Antiquities is trying to protect the Egyptian archaeological sites, but is unable to deter the outlaws who are slowly destroying them.