Does Turkey care about cultural diversity?

More than 100 countries have endorsed a UN convention on protecting cultural diversity, but a decade after its inception, the convention still awaits ratification by the Turkish parliament. 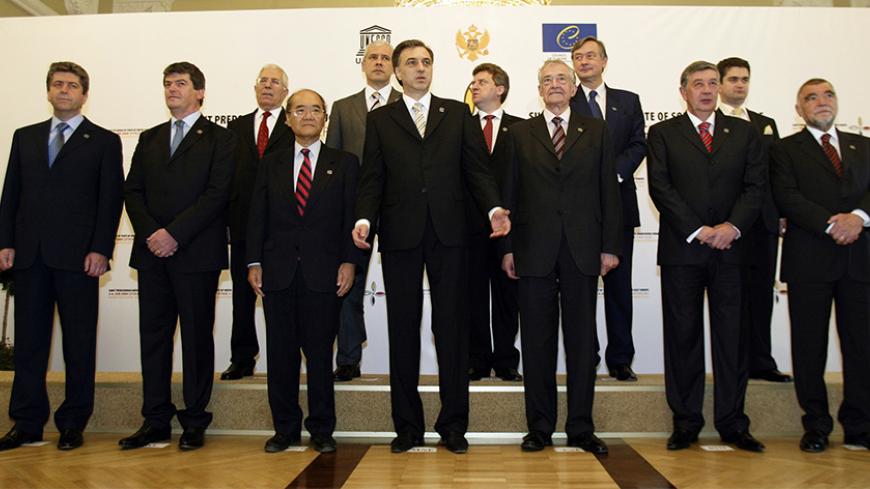 The Heads of State of South-East Europe pose for photographers before their summit meeting, "Management of Heritage Diversity and Its Promotion for Tourism," in cooperation with UNESCO and the Council of Europe in Cetinje, Montenegro, June 4, 2009. - REUTERS/Stevo Vasiljevic

On Oct. 20, 2005, the UNESCO General Conference adopted the Convention on the Protection and Promotion of the Diversity of Cultural Expressions. The convention, backed by Turkey’s representative at the session, aims to protect local cultural outputs and expressions against popular culture, such as films, television programs and songs. Popular culture has grown in speed and influence since the 1990s with the impact of globalization.

To take effect in individual countries, the convention needs to be ratified by their legislatures. The parliaments of 115 countries have so far endorsed the convention, to which the European Union is also a signatory. But 10 years later, the Turkish parliament has yet to ratify it.

Outlining Ankara’s approach on the issue, the preamble of the bill reads, “The convention carries significance in terms of preserving our country’s cultural values against cultural industry products and the cultures of countries with which we interact intensely, passing those values on to the future and transforming them into an industry capable of competing with the cultural industries of the said countries.”

It goes on, “Ratification of the convention, provided that reservations are put and declarations made on some articles, will contribute to enriching our country’s cultural policies.”

On Oct. 21, 2011, the parliament’s Foreign Affairs Commission unanimously approved the draft bill and sent it to the general assembly along with its report on the issue.

The report — signed by then-Commission Chairman Volkan Bozkir, a lawmaker for the ruling Justice and Development Party and now Turkey’s EU minister — includes a “Reservations” section, which points out that Articles 7 and 20, which pertain to minorities and indigenous peoples, contradict the Turkish constitution and the 1923 Treaty of Lausanne, one of modern Turkey’s basic founding documents, and makes the following declaration: “The Republic of Turkey declares that no community exists on its territory that can be deemed an ‘indigenous people’ under the convention.”

After a four-year wait in the general assembly, the bill became invalid on June 7 when legislative elections produced a new parliament. To get the convention ratified, the new government will now have to resubmit another draft bill to parliament.

Retired Ambassador Numan Hazar, who as Turkey’s permanent UNESCO representative in 2005 voted in favor of the convention at the General Conference, maintains that nothing in the convention contravenes the Treaty of Lausanne.

“There is concern that the convention could entitle Turkey’s Armenians and Kurds to various rights. Yet we’ve already ratified all international conventions on human rights. We’ve become party to anything but cultural diversity. The European Union, too, is party to the convention,” Hazar told Al-Monitor.

“Besides, we are not imposing any cultural restrictions on Kurds and Armenians. They are producing their music, books, etc. Yet they [the government] are wary that something may come up about the Kurds, but there is nothing like this whatsoever,” he added.

The essential purpose of the convention, he stressed, is “to rein back Anglo-Saxon influence in the globalization process and enhance national cultural riches.”

Hazar went on, “The convention aims to stem cultural globalization and prevent the extinction of the nation-state, curb the influence of the English language and ensure that every nation preserves its original culture and that national states preserve their own cultural values. Another purpose is to ensure that every country preserves its own inner cultural diversity. And we have no problem with cultural diversity within our country. We voted ‘yes’ on the convention in 2005 on government instructions.”

Pointing to an important element in the accord, Hazar said, “The convention introduces the new concept of ‘cultural goods’ that includes films, TV series, books, DVDs, etc. It enables national states to adopt measures to protect themselves against cultural invasion. You can raise tariff barriers, for instance, against the entry of cultural goods. Look, the United States has not endorsed the convention because it is the biggest culture exporter. But countries like Britain, the Netherlands, France, Germany and Sweden have all endorsed the convention.”

Another retired ambassador, Osman Koruturk, sat on the Foreign Affairs Commission as a lawmaker for the main opposition Republican People’s Party when the panel discussed the convention. He sees no purposeful intent behind the delay in ratification.

“I don’t think the convention is being deliberately delayed. If it were so, it wouldn’t have been submitted to parliament in the first place,” Koruturk told Al-Monitor. “This has to do only with the slow pace of things in parliament. Many international accords remain unapproved and become invalid in a given legislative term, with the process beginning anew the next term.”

As a candidate for EU membership, Turkey is obliged to ratify the convention in the course of harmonizing its cultural policies with those of the EU during the accession process.

But can a convention prevent cultural imperialism in an age when technology is spreading like wildfire?

Not quite, according to Ibrahim Ethem Basaran, a longtime professor of educational sciences at Ankara University.

“You can’t stop the spread of culture unless you stop communication. Culture is the person’s way of life. It permeates and spreads through language, faith, objects and fashion. You can’t stop this,” Basaran told Al-Monitor.

“The Internet has become the primary vessel of globalization, promoting the English language. Culture means language. First the language sneaks in and then the culture to which it belongs. This happens via technology, movies, music, etc. Language becomes the vessel of assimilation. The more communication and technology advance, the more the world will move toward one single culture,” he said.

Basaran noted that humans produced about 500,000 languages throughout history, but only 10% of them survive today.

“It means 450,000 languages and as many cultures have disappeared. About 150 languages used to exist in America, and now this is coming down to one because if you don’t speak English you can’t get a job and make a living. Similarly, a Kurd or a Circassian who doesn’t speak Turkish will find it hard to get a job in Turkey. Many languages have died in the Caucasus. There is, for instance, the Adyghe language, which is dying out today. Only one very old person remains in Turkey who speaks the language,” Basaran said.

“Stronger languages and cultures are swallowing up the weaker ones,” he stressed. “Globalization should not rest on such a system. I guess that’s what the UNESCO convention aims at.”