Activists hailed the Tunisian parliament’s recent approval of a law criminalizing racial discrimination, although they believe the road is still long to completely eliminate racism that is deeply rooted in Tunisian society. 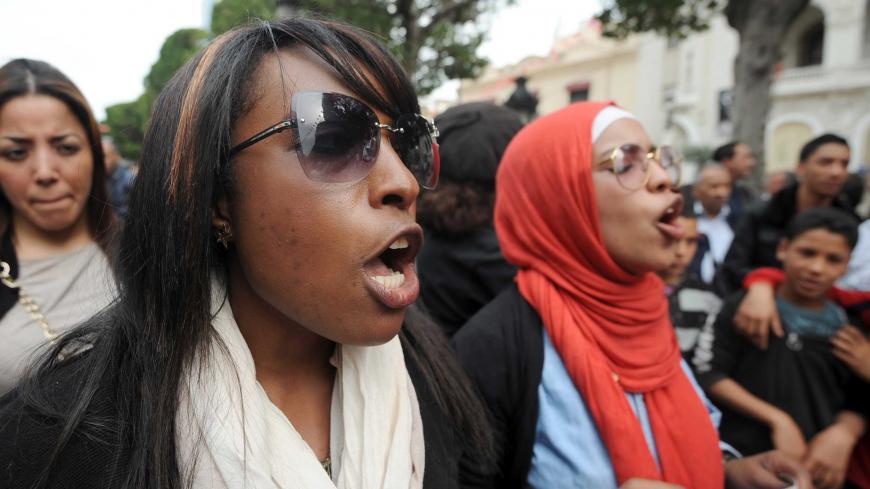 TUNIS — Tunisia’s parliament voted to criminalize racial discrimination on Oct. 9 in what supporters are calling a historic step in the protection of minority rights in the country.

“Today, minorities and non-Tunisians who might face discrimination in our country are protected by the law,” said Rania Belhaj Romdhane, a member of M’nemty (My Dream), an anti-racism organization that advocated for the legislation. “It is a very important step.”

Messaoud Romdhani, head of the Tunisian Forum for Economic and Social Rights, agreed in regard to the law's significance. After the vote, he was reported as saying, “This is a very important turning point in the history of Tunisia, equivalent to the abolition of slavery.”

Under the law’s provisions, those convicted of using racist language could be imprisoned for one month or fined $350, while those guilty of inciting hatred, making racist threats, spreading and advocating racism or belonging to an organization that supports discrimination could face one to three years in prison or a $1,050 fine. Even steeper fines can be levied against institutions and associations found to have engaged in discriminatory practices.

The legislation puts Tunisia, often hailed as the catalyst and biggest success story of the Arab Spring, once again at the forefront of progressive change in the region.

Throughout its history, Tunisia has often led the way on social issues, among them racial equality and women’s rights. In 1846, it became one of the first countries to formally abolish slavery. (The practice continued until 1890). Under the autocratic rule of former President Habib Bourguiba, it introduced landmark reforms protecting women’s rights, a legacy on which Tunisia's current president, Beji Caid Essebsi, has sought to build.

Tunisia also prides itself on its diverse and tolerant character. Living at the crossroads of the Maghreb, Europe and the Levant, Tunisians are an ethnically diverse people — a mix of Arab, Berber, European and Phoenician roots along with others — bringing together a range of cultural influences. A small community of Jews has also lived alongside their Muslim neighbors for centuries, mostly on the southeastern island of Djerba. They now number around 2,000, less than 0.1% of the overall population.

“You see racism on the streets on a daily basis — when you get mocked, when you get bullied, when you are called names,” asserted Belhaj Romdhane, a black woman who said she regularly encounters such behavior. “When I was a child, I was always called names, even by my teachers, who were supposed to be role models. … This made me always feel scared of being judged.”

Fadwa Gmiden, from Gabes, told Al-Monitor that life as a black Tunisian has come with its struggles. “Sometimes I’m not sure which is harder: being a woman or being black,” Gmiden said. “It requires double the effort to be accepted. There is always this ‘You’re not Tunisian enough.’”

Since the 2011 revolution, civil society groups have pressured the government to pass legislation specifically geared at protecting racial and ethnic minorities, but at first, there was little political will, said Belhaj Romdhane. That changed in 2016 following a series of racially motivated assaults that prompted a wave of protests and a national conversation about racism. In one highly publicized case in December of that year, three Congolese students were attacked with a knife in central Tunis, landing one of them in intensive care.

Responding to the incident, Prime Minister Youssef Chahed called on parliament to “ratify the draft law criminalizing racial discrimination as a matter of urgency.” Today, nearly two years later, Belhaj Romdhane and other activists are proud that the law they long worked to enact has finally been passed. That done, however, they recognize that the road ahead for ensuring equality is a long one.

“For years, we’ve held many protests, we’ve held many sit-ins, including behind the doors of parliament. We’ve organized a lot of marches on the streets, and we’ve held many cultural events and campaigns to raise awareness,” said Belhaj Romdhane. “Without the presence of civil society, none of this would have happened.”

She added, “Today, we are very hopeful. We are very excited, and we are very proud of our country, but this is only the beginning. We can’t say that racism or discrimination will stop immediately because of a law. This is only the key to opening the door.”

Along those same lines, Romdhani remarked, “It's a giant step, but there's still a lot of work to be done to make this law a reality in a society where there is racism against the 10% of black Tunisians and sub-Saharan Africans who suffer from insults and sometimes violent attacks.”

According to Minister of Higher Education and Scientific Research Salim Khalbous, Tunisia’s black minority is estimated to account for 10-15% of the overall population, and there are some 6,500 foreign African students, mostly from the sub-Sahara, currently living in the country.

Gmiden, asked whether she was optimistic about the new law, stated, “In Tunisia, we have good legislation for many things that are not yet put into practice. … We need a cultural shift in order for this law to be successful.”

The Tunisian Press Agency has reported that to help educate the public and to fulfill the spirit of the law, a new body, the National Commission against Racial Discrimination, will be tasked with overseeing strategies and public policies and conducting public awareness campaigns on the issue. Proponents of the law said that efforts to raise awareness, especially among the country’s younger generations, are critical to effecting change.

“Today, many Tunisians, most of them with good intentions and good faith, say that we have no problem with racism, but the first act to tackle the issue of racism is to recognize it,” said Mehdia Ben Gharbia, Tunisia’s former human rights minister, after passage of the new law, which he helped bring forward.

“Racism is a universal illness that you can find everywhere” said Belhaj Romdhane. “We just need to talk about it, because denial is always a problem. We want this country to become fully democratic, so that it can be an example for other countries in the region, a country that leads on human rights, that leads on diversity and that accepts all people.”