Though Tunisia was one of the first countries to abolish slavery, violence and discrimination against its black minority continues to plague the country, and proponents say an anti-discrimination law is long overdue. 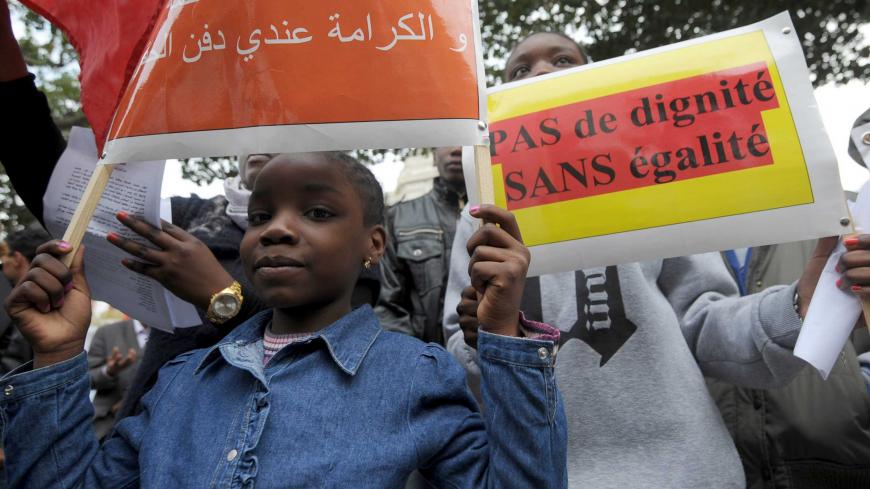 Tunisian children hold placards, one reading in French 'No dignity without equality,' as they take part in a demonstration against racism in Tunis, Tunisia, March 21, 2014. - FETHI BELAID/AFP/Getty Images

TUNISIA — In an Aug. 29 joint press conference with the Association of Ivorian Students and Interns in Tunisia, Yemina Thabet, the head of the Tunisian Association for the Support of Minorities, called on the Tunisian parliament to speed up the ratification of the draft law criminalizing racism. Eight Ivorians were physically and verbally abused by Tunisians in late August.

The Tunisian Forum on Economic and Social Rights, the Euro-Mediterranean Network and the Committee for the Respect of Freedoms and Human Rights first proposed a bill to criminalize racial discrimination in Tunisia at a press conference in March 2016. In June 2016, the bill was submitted to the various parliamentary blocs.

In an Aug. 29 statement to Mosaique FM, Thabet condemned the recurrent racially motivated acts of verbal and physical abuse committed against black people in Tunisia and bemoaned the absence of a strict deterrent law to protect those who fall prey to such crimes.

Tunisia is home to 60,000 African immigrants and more than 4,000 African students. The attack on the eight Ivorians sparked renewed debate on the phenomenon of racial discrimination in the country and led human rights groups to voice concerns over the increasing rate of abuse that people from sub-Saharan Africa are facing.

On Dec. 25, 2016, a young Tunisian man that has not been publicly identified attempted to stab three Congolese students, causing them serious injuries and sparking widespread protests.

Thabet told Al-Monitor that parliament’s committee on rights, freedoms and foreign relations ratified the draft law on the elimination of racial discrimination on Jan. 17, but the bill has yet to be discussed in a full parliament session. She stressed that its ratification has become urgent

Current Tunisian laws do not specifically protect immigrants from attacks or acts of racism. The bill, if enacted, will make Tunisia the second country in Africa to create a law against racial discrimination after South Africa.

Article 21 of the Tunisian Constitution already provides for the elimination of all forms of discrimination on the basis of the color of the skin. It reads, “All citizens, male and female, have equal rights and duties and are equal before the law without any discrimination.” But rights groups say it lacks bite. Several non-governmental associations that have been established in the wake of the January 14, 2011, revolution in Tunisia, most notably the Mnemty Association, the Adam Association for Equality and Development and the Tunisian Association for the Support of Minorities, are pushing the parliament to pass a bill to criminalize racial discrimination in Tunisia.

These associations are ramping up meetings and consultations with parties that support the draft law while organizing protest marches and awareness campaigns in cooperation with various civil society organizations. They remind listeners that Tunisia passed a law abolishing slavery in 1846, before France, which abolished it in 1848, and the United States, where the abolition of slavery engulfed the country in a civil war.

Ziad Rouwin, the general coordinator of the Mnemty Association, told Al-Monitor, “The phenomenon of racial discrimination is widespread among Tunisians. Black African students are the most targeted groups in Tunisia as they face several kinds of harassment.” The human rights activist added that the hate speech and racist words used against black people are no longer acceptable.

Mohamed Ali al-Khalidi, the director general of the Ministry of Relations, Constitutional Bodies, Civil Society and Human Rights, told Al-Monitor it is a shame for any discriminatory incidents to take place in Tunisia on the basis of color, race or religion. Tunisia’s constitution, he said, enshrines rights, freedoms and equality for all. Khalidi said that racial discrimination should be discouraged by parents and through awareness campaigns in schools.

“Despite the theoretical equality that Tunisian citizens, black and white, enjoy before the law and in terms of economic and social opportunities, people still view black individuals as second-class citizens,” Khalidi said.

Sociologist Abdul Sattar al-Sahbani told Al-Monitor that black people account for 15% of the Tunisian population. He explained that one of the most prominent aspects of racial discrimination is that black individuals do not hold any positions in Tunisian institutions. There is only one black member of parliament — Monjia Kaskasi who represents the Ennahda movement — but there is not a single black individual in any ministry.

Tunisian lawyers hope that the parliament will ratify the bill by March 21, 2019, which marks the International Day for the Elimination of Racial Discrimination.