Living conditions are dire in Kobani, and the precarious economic conditions seem to be related to the lack of oil due to the blockade that has been insulating the city. 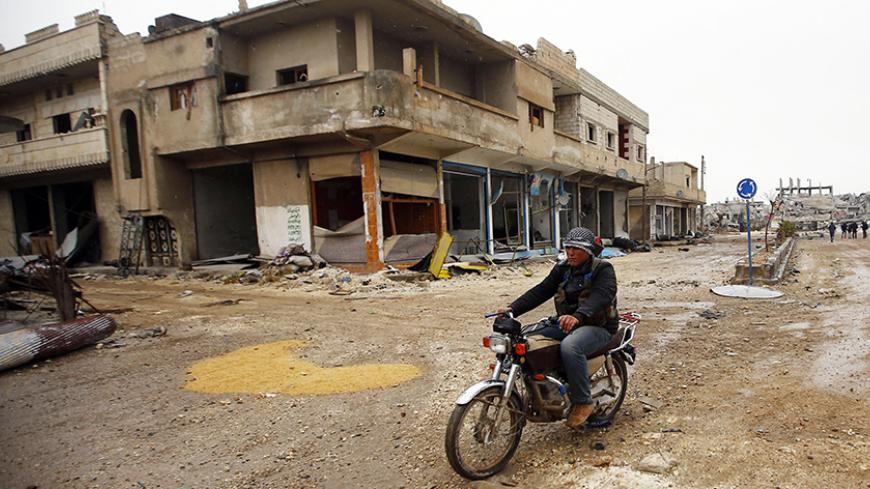 A fighter from the Kurdish People's Protection Units patrols on a motorcycle in the streets of the northern Syrian town of Kobani, Jan. 30, 2015. - REUTERS/Osman Orsal

KOBANI, Syria — Amid attacks by the Islamic State (IS) and instability in the region, the people of Kobani are struggling to rebuild their city and secure their needs — and a lack of access to fuel is making that difficult.

The Kurdish areas in Syria are key to the production of petroleum, especially the Rmelan fields in northeast Syria, which are responsible for nearly 36% of Syria’s national production of gasoline. Nevertheless, the Kurdish areas are poor and need to be rebuilt, given the Syrian state’s neglect of those areas.

When Kobani was first invaded by IS in 2014, its people were displaced and faced dire conditions. Kobani and its countryside were subjected to an economic blockade, and communication with other cities was cut off as a result of the war, which lasted about six months. Only IS and Syrian fighters remained in the city, as well as a small number of residents who stayed to protect their properties.

When the People’s Protection Units (YPG) liberated Kobani in January 2015, residents returned despite the city being destroyed. Life was quite difficult. The Turkish government did not allow food to pass from Turkey through the border crossing due to a lack of cooperation between Turkey and the Kurds, among other reasons. Food and fuel had to be smuggled illegally into Kobani.

The price of a liter of diesel reached around 700 Syrian pounds ($3.71), compared with about 15 cents per liter before the crisis, while a bundle of bread was being sold at an extraordinary price, ranging between 150 and 200 Syrian pounds (79 cents to $1.06).

“The living conditions were very difficult,” Aysel Ahmad, representative for diplomatic relations in the Democratic Union Party (PYD) in Kobani, told Al-Monitor. “However, people were returning to their homes, as they preferred returning over staying in shelters. The Kobani province administration was incurring a cost of 5 million Syrian pounds [$26,500] a day in order to reduce prices, and after the liberation of the city of Tell Abyad, prices declined dramatically as fuel and food came in from Jazeera province. Residents rushed back in huge numbers, and the price of a liter of diesel declined to 20 Syrian pounds [11 cents].”

The YPG, the Free Syrian Army fighters and the international alliance against IS liberated Tell Abyad in mid-June. This paved the way for life to return to Kobani. The prices of fuel and food dropped since they were coming in from Jazeera.

Evin Ali, a resident from Kobani, told Al-Monitor, “We had a tragic life. All of the borders were closed, and we could not provide anything to our children. The Turkish border was closed, and it was dangerous to go to Aleppo because of IS. We were trapped from all sides, and the liberation of Tell Abyad was a relief for the whole city. We are now living in Kobani, despite the harsh situation, but it is better for us to live here than to travel abroad.”

IS did not allow the citizens to enjoy the low prices for long. On June 25, IS came in and killed nearly 320 Kobani citizens.

Kurdish politician Hussein Omar told Al-Monitor, “I think that what is happening in Kobani is a major operation involving several parties that are supervised by the Turkish intelligence services and is incidentally related to the liberation of Tell Abyad. This is because what happened was an unprecedented massacre in Syria since the outbreak of armed conflict.”