Although President Mahmoud Abbas approved the Convention on the Elimination of All Forms of Discrimination Against Women, Palestinian women still face discrimination concerning their marital status. 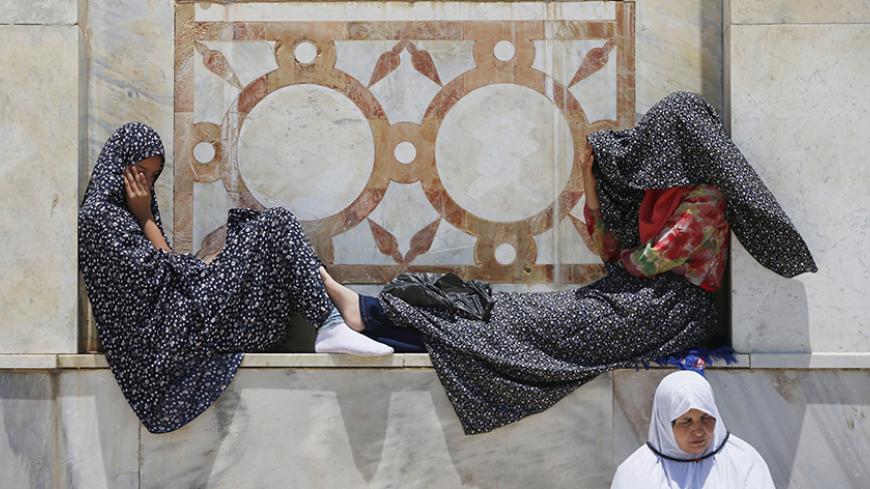 Palestinian women wait ahead of prayers on the third Friday of the holy month of Ramadan at the compound known to Muslims as the Noble Sanctuary and to Jews as Temple Mount, in Jerusalem's Old City, July 3, 2015. - REUTERS/Ammar Awad

RAMALLAH, West Bank — While Palestinian journalist Nahed Abu Taima was looking to rent a home in the West Bank city of Ramallah, she had great difficulty as a divorced woman in finding a landlord willing to rent to her.

Abu Taima, 43, who works as the gender unit coordinator in the Media Development Center at Birzeit University, told Al-Monitor, "I experienced difficulty in finding a home to rent as a divorced woman. Landlords kept telling me, 'You're a woman, where are we supposed to find you to collect the rent?'”

Following the case of Abu Taima and dozens of similar cases, activists in the West Bank launched a campaign, titled “Together we remove marital status from ID cards,” and demanded that Palestinian Authority (PA) officials remove "marital status" from ID cards, as Palestinian society looks negatively at divorced women.

Campaign founder Mona Hawash told Al-Monitor, “The campaign was launched in April [2015] and is receiving wide popularity among feminist activists and institutions as it aims to stop harassment of women.”

Hawash said that divorced women are often asked to show their ID cards when conducting formal business, traveling or paying bills. This, according to Hawash, exposes them to harassment, questions about the reasons behind their divorce, and interrogations about their personal circumstances. Since the launch of the campaign, dozens of women reported having been subjected to these types of questions, confirming the existence of discrimination against women, especially those who are divorced.

Hawash added that while the campaign is an online and media effort right now, “It will take another form after Ramadan with workshops for women and a collaboration with Palestinian women's organizations to coordinate efforts aimed at putting pressure on decision-makers to take the necessary measures, especially in light of the lack of any legal reasons that prevent the removal [of marital status from ID cards]."

On Feb. 11, 2014, the Interior Ministry started working on removing "religious affiliation" from the Palestinian ID card, in response to a decision issued by President Mahmoud Abbas. This move was aimed at achieving equality between citizens regardless of religion, and organizers of the marital status removal campaign are aspiring to a similar decision.

Fadia Salahuddin, a journalist who is active in the campaign, told Al-Monitor that the removal of marital status on ID cards would reduce the adverse consequences faced by women, limit the personal questions women are exposed to, and stop discrimination against women when it comes to official business matters that compel them to show their ID cards.

Salahuddin said, “This measure would contribute to dealing with citizens as individuals, not based on their marital status.” She added, “[We] are in contact with officials in the Ministry of Interior to discuss a law to remove marital status from ID cards that we are hoping President Abbas will approve, but nothing has been accomplished yet. Supreme Judge Mahmoud al-Habbash has been approached [by the campaign organizers], and he confirmed that there is no legitimate law preventing the removal of marital status from ID cards.”

For her part, Sharia Judge Kholoud al-Faqih told Al-Monitor that there is no legitimate reason preventing the removal of marital status from ID cards, but that the Islamic court has nothing to do with this.

“I personally think that marital status is only necessary for the Ministry of Interior when it comes to procedures and registration, but I don't think that its presence on the ID card is necessary,” Faqih said.

She added, “As far as legitimacy and Sharia are concerned, there is no problem with having marital status on the ID card, but this entails negative social effects given the inherited negative social perception of divorced women."

Spokesman for the Ministry of Interior, Salah Jaber, told Al-Monitor, “Marital status on ID cards is based on the Civil Status Act that was adopted by the ministry in the registration of citizens’ information.”

Although the Ministry of Interior welcomed the idea proposed by the campaign on June 15, it expressed some reservations, such as the need for Palestine to keep up with its Arab neighbors, which cling to register the marital status of its citizens but only use “married” or “unmarried.” The ministry said it cannot make such a decision, as it requires legislative authority.

The campaign organizers told Al-Monitor they submitted to the Ministry of Interior a request to modify the category of marital status on ID cards, but Jaber stressed that responding to this demand requires legislation from the Palestinian Legislative Council (PLC) or a decree from Abbas for approval and execution.

Jaber said the ministry cannot respond to this request, as it requires the drafting of a law by the PLC or by Abbas, since the Ministry of Interior is an executive body and not a legislative one.

This campaign raises questions about the accomplished women's rights in Palestine and whether harassment faced by women would stop should the campaign work.

Abu Taima said that discrimination against women would not end if marital status is removed from ID cards, because the essence of the problem lies in society’s negative perception of women. However, the move would contribute to reducing discrimination and its consequences.

Abu Taima noted that women's issues are not seriously dealt with in Palestine. As a consequence, we find that women do not trust the political leadership, which fails to change existing laws and take measures that can achieve gender equality. The Penal Code and the Personal Status Code, especially, discriminate against women in terms of custody arrangement; in case of a divorce, an 18-year-old girl will often be placed in the custody of her father, while at that age she needs her mother most.

In addition, there are no Palestinian laws prohibiting violence against women; "honor killings" of women still prevail in Palestinian society.

For her part, the president of the Women's Affairs Technical Committee, Sarida Hussein, who supports the campaign, told Al-Monitor that we will witness research and planning among all parties to agree on the mechanisms of action aimed at achieving this demand.

Hussein stressed that the removal of marital status from ID cards can only be achieved through strong pressure placed on the decision-makers by women's organizations, the community and other interested parties. She said that social issues are not as important for decision-makers as economic and political issues.

Although Abbas approved on March 8, 2009, the Convention on the Elimination of All Forms of Discrimination Against Women in line with Basic Law provisions, Palestinian women are still hoping that official authorities will adopt equitable laws that protect women.