Successive governments have failed to attend to Gaza’s heritage, often neglecting it and effacing the country’s archaeological history. 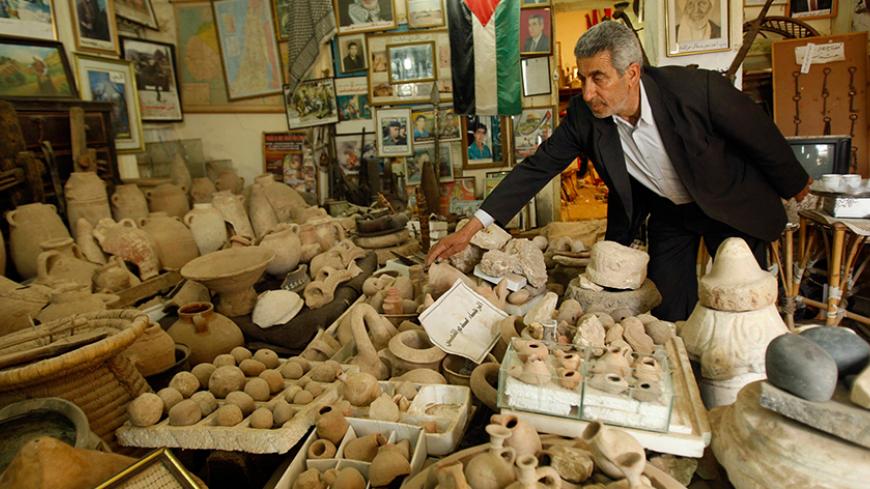 Palestinian amateur archaeologist Waleed Al-Aqqad touches a clay jar from his collection of ancient artifacts at his house, which he has turned into a museum, in Khan Yunis in the southern Gaza Strip, April 3, 2011. - REUTERS/Ibraheem Abu Mustafa

GAZA CITY, Gaza Strip — Some of the Gaza Strip's most precious historical sites, dating back thousands of years, are being devastated not only by the targeted bombardments of repeated wars, but also from long-term government neglect.

"In addition to the Israeli attacks, cultural heritage, as well as Islamic and Christian archaeological sites, suffer from significant violations due to the neglect of successive governments,” Nasser al-Yafawi, an expert on history and heritage in the Gaza Strip, told Al-Monitor.​

He added, “These governments failed to preserve the Palestinian heritage in Gaza. They left heritage sites exposed to looting, pillaging and effacement without providing the minimal level of care that is worthy of the civilization that these sites and old buildings represent.”

Given the large number of invasions and battles that have taken place, Gaza is a combination of historical civilizations — "a point of convergence between Egypt and the Levant," said Yafawi, who is also a member of the commission tasked with preparing the Palestinian history and contemporary issues curriculum. "This turned it into a melting pot for various cultures, including the Assyrian, Pharaonic, Byzantine, Romanian, Greek, Crusader and Islamic cultures.”

Yafawi drew attention to the local specialists’ lack of archaeological experience, which exposed some Palestinian archaeological sites to damage and collapse.

For instance, Yafawi explained, the monastery of St. Hilarion, which was built in A.D. 329 in the central Gaza Strip and contains the first Byzantine church in Palestine, is suffering from a state of extreme neglect by the government in Gaza, as it was left exposed to fast-growing popular sprawl without maintenance or being guarded.

Adnan Abu Dieh, an Islamic University archaeology professor, agrees with Yafawi about the successive governments’ neglect. He told Al-Monitor, “There are about 60 discovered archaeological sites in Gaza, and I think that there are dozens, and perhaps hundreds of sites that are yet to be unearthed. Gaza is an area that is very rich in hidden archaeological sites.”

Abu Dieh said it would be better for these archaeological sites to remain undiscovered until there is a government that is capable of appreciating the value of monuments and heritage as an integral part of the Palestinian identity. He pointed out that previous governments had obliterated a number of discovered archaeological sites, including the Tell es-Sakan site south of Gaza City, which dates back to the Early Bronze Age (3300-2300 B.C.).

Like Yafawi, Abu Dieh pointed out that Gaza has several archaeological sites that served as a point of conflux between Egypt, the Levant and Europe. Chief among these sites is the ancient city of al-Balakhia, west of Gaza, which dates from 1200 B.C. to A.D. 324. Inside this area, unique monuments were discovered that are unmatched by any others in Palestine.

Al-Balakhia contains the Anthedon port, the oldest port in the history of the Middle East, Abu Dieh said, adding, “This port is completely neglected and no one takes care of it now. It has also been used as a place for military training by one of the resistance factions in Gaza, and it was interred with sand while large parts of it were leveled."

In response to previous accusations of government neglect, Mohammed Khallah, assistant undersecretary of the Ministry of Tourism and Antiquities in Gaza, told Al-Monitor, “We are trying hard to preserve these archaeological sites and buildings, but we only have limited capabilities due to Israeli siege policies.”

The Ministry of Tourism and Antiquities had confirmed in a statement published Sept. 2 that Gaza has suffered heavy architectural losses as a result of Israeli attacks.

Although Khallah has confirmed that there are ongoing exploration operations in Gaza aimed at discovering monuments — most notably in the area of Tel Rafah, where a building dating back to the Roman era was recently discovered — he pointed out that the restoration and exploration process is very slow due to the blockade.

“Israel is preventing the introduction of materials for repair to Gaza, while preventing the entry of international bodies specialized in history and monuments such as [UNESCO] to Gaza to take care of its archaeological and historical sites,” he said. The ministry's specialists in the restoration and exploration field are inexperienced, he added.

With respect to the neglect of Gazan archaeological houses, he said, “We are seriously considering the conversion of some of these houses into cultural museums and centers, in order to increase the cultural awareness of Palestinian generations.”

Yafawi accused Hamas-run local authorities in Gaza of neglecting the statue of Apollo, which dates back more than 2,000 years and was discovered in August 2013. He said Hamas is bargaining with European parties over the statue. Archaeologists and heritage experts did not have the opportunity to examine or see this statue — except in pictures — as the Gaza police are strongly protective of it.

Khallah said his ministry, "being the competent authority," asked the police for the statue to take care of it but was rejected. The police denied that the statue was subject to a financial bargain.

For Abu Dieh, preserving Palestinian heritage and archaeological sites in Gaza will require enactment of a firm law aimed at protecting these monuments from looting and pillaging, allocating financial budgets for restoration and excavation operations, preventing population sprawl from the Nile and, most of all, lifting the Israeli blockade and the ban on international exploration delegations to Gaza.