How viable is Lebanon’s presidential poll?

A few Christian leaders in Lebanon have agreed on a mechanism to resolve the ongoing presidential conflict that has caused the resentment of many, but will it prove a viable option? 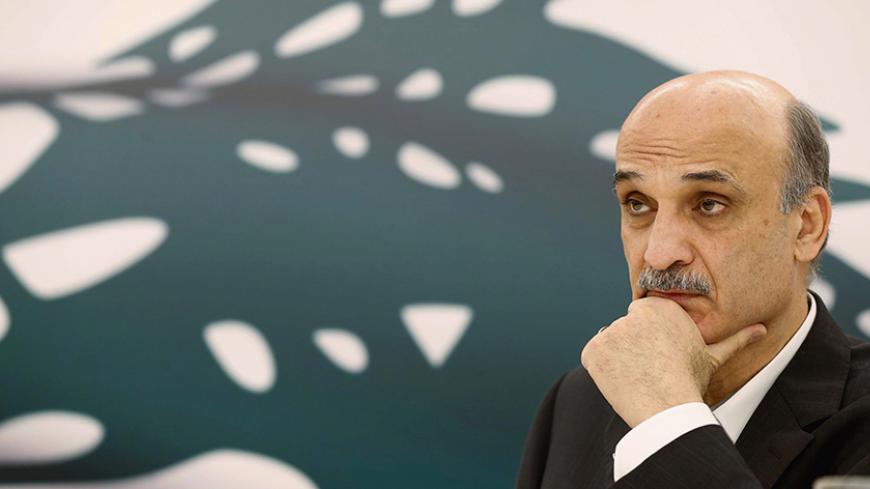 Samir Geagea, leader of the Christian Lebanese Forces, listens during an interview with Reuters at his home in the Christian village of Maarab in the mountains overlooking the seaside town of Jounieh, Oct. 31, 2014. - REUTERS/Mohamed Azakir

The proposal of the parliamentary Change and Reform bloc, headed by Free Patriotic Movement (FPM) leader Michel Aoun, to carry out a poll to solve the presidential crisis has raised considerable controversy in Lebanese political circles. The poll aims to highlight the aspirations and needs of the Christians in Lebanon, as well as to determine the value of the active political forces in the Christian arena and the level of support for their leaders. The purpose of the step is to classify Christian leaders based on the size of their constituencies, and then determine those who are most capable of legitimately filling the presidential vacuum that has lasted for more than a year.

The most important point about this proposal is that it has received the support of the Lebanese Forces, which is the FPM's traditional rival. The proposal even resulted from an unexpected rapprochement between the two archenemies, which culminated in a declaration of intent exemplified by a document signed in June and devoted to the need to come up with a “strong president” — a president with a large Christian support base.

In this context, the question arises as to whether this proposal will be implemented, and most importantly, whether it will contribute to taking the solution to the presidential dispute a step further.

The first objections to this mechanism aimed at resolving the presidential dispute — which is not based on any convention or the constitution — emanated from Christian ranks, including figures from both the March 14 and March 8 camps.

Former President Amin Gemayel — leader of the Kataeb party, a traditional right-wing party and pillar of the Lebanese March 14 camp — explicitly objected to the proposal, saying "the referendum violates the constitution.”

On the other hand, while member of parliament Suleiman Franjieh did not object to the poll, he said that he would not abide by its results. In other words, Franjieh meant that if the poll showed that a certain candidate was the most representative Christian, and should the candidate not represent his political inclinations, then he won’t elect the candidate.

It seems that the mechanism of selecting candidates based on the size of the support they garner does not appeal to all Christian leaders, especially those who cannot rely on large constituencies, such as Franjieh, Gemayel or Boutros Harb. In addition, some of these candidates may not have a very high rate of support at the Christian level, but can prove to be more popular than those who score high with Christians.

The proposed mechanism confines candidates to two Christian representatives — Aoun and the Lebanese Forces' Samir Geagea — while shutting the door on national figures, including Central Bank Gov. Riad Salameh, Gemayel and Franjieh, who enjoy equal support among all sects. Moreover, such a mechanism may exacerbate sectarianism at a very critical stage facing the region, where Christians have been victims in places such as Syria and Iraq. In fact, such a mechanism could drive the Christian candidate to adopt a sectarian discourse to appeal to his Christian constituency, and this could easily spin out of control.

The second wave of objection came from outside the Christian camp: Muslim and Druze leaders. One prominent voice of opposition was that of Walid Jumblatt, who reiterated the need to elect a consensual president.

The most reflective statement was probably made by Marwan Hamadeh, a leading member of Jumblatt's Druze political bloc, who said that the presidential poll “lacks prospects and looks like a maneuver planned by two political forces, namely the FPM and the Lebanese Forces.”

The mechanism put forward to resolve the ongoing presidential conflict has provoked resentment mainly in the ranks of the Druze and Sunnis, according to whom the presidential issue is a national issue and the Lebanese president is the president for all the Lebanese people. Therefore, limiting the poll to Christians contradicts the character of the national charter of the first institution and all the institutions of the republic.

Asked about the constitutionality of the move, one of the key figures connected to the FPM-Lebanese Forces deal told Al-Monitor, also on condition of anonymity, “The step does not contradict the constitution, so what is the harm in holding a referendum? All the parties conduct polls. And in any case, the poll is not binding, but can reflect the Christian concerns.”

Each of the past enemies (FPM and Lebanese Forces) has its own set of interests, but it is in the interest of both to show the imbalance in the Christian representation during the post-Taif Agreement period, knowing that this imbalance has not been addressed even after the departure of Syrian troops from Lebanon in April 2005.

However, this lack of fair representation can only be rectified through the adoption of a new election law that provides a healthy representation and that can be fair to all. More importantly, balance should emanate from the institutions and should aim to entrench a rule dictated by the national charter — the Christian-Islamic partnership. Based on this very national charter rule, all parties have acknowledged the Christian right to claim representation, even if this acknowledgment has not materialized on the ground and no new election law has been approved yet.

A Christian political leader told Al-Monitor on condition of anonymity, “What is the point of submitting proposals that contradict the national charter rule? What if the plan backfired and a Muslim group started calling for a poll on Christian rights dictated by the constitution, such as the president of the republic’s sect?”

Amid the prevailing chaos sweeping across the Levant — where terror and barbarism are replacing all form of states — the Lebanese enjoy a relative but delicate calm. They at least have a constitution. They better stick to it.