This week marks the 25th anniversary of the start of the 1990 Kuwait crisis, which played a decisive role in altering the region. 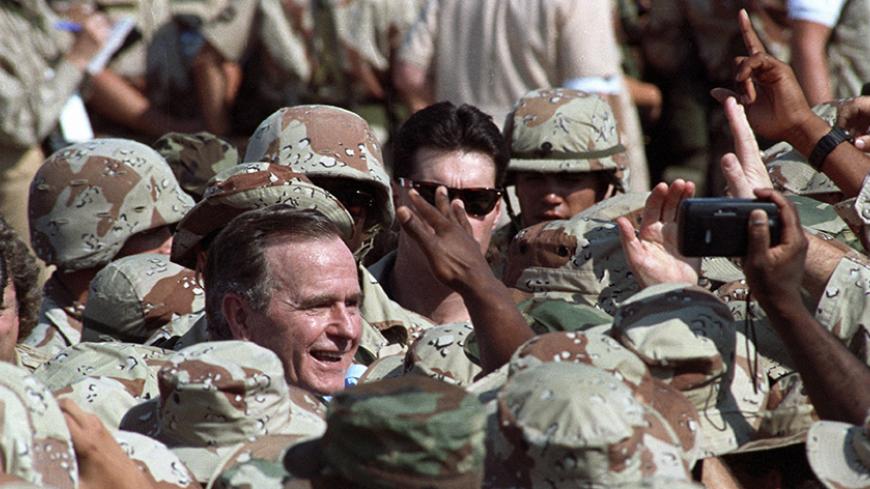 President George H.W. Bush is surrounded by a sea of US military personnel as he greets troops following an arrival ceremony in the eastern Saudi Arabian city of Dhahran, Nov. 22, 1990. - Reuters/Terry Bochatey

The Iraqi invasion of Kuwait a quarter of a century ago transformed America’s role in the Middle East profoundly. We are still living with the legacy of the crisis of the summer of 1990.

The Kuwait crisis of 1990 came up like a summer storm with little or no warning. Twenty-five years ago, Iraqi dictator Saddam Hussein threatened Kuwait and the United Arab Emirates (UAE) publicly, demanding that they reduce oil production to raise prices to $20 a barrel. Saddam warned that the two Gulf emirates were stealing money from Iraq by exceeding their OPEC quotas and that Baghdad would take “effective action to put things right.” Immediately the CIA reported Saddam was massing his elite Republican Guard at the border with Kuwait. By July 25, 1990, the Iraqis had mobilized over 100,000 troops on the border. Kuwait and the UAE agreed to cut production but Saddam was planning much more. On Aug. 1, 1990, his army invaded Kuwait, conquering it within hours. The CIA warned President George H.W. Bush that Saddam now “controlled the second- and third-largest proven oil reserves in the Gulf with the fourth-largest army in the world.” On Aug. 5, 1990, the CIA told Bush the Iraqis were massing to attack Saudi Arabia. When the CIA director was asked in the Cabinet Room at the White House what would be the earliest Iraq could attack, the answer was “now,” according to Bush and former National Security Adviser Brent Scowcroft's 1998 book "A World Transformed."

Within weeks a quarter of a million American soldiers were in Saudi Arabia and within six months a half million. The war that followed destroyed Iraq’s dreams of regional domination. It may well prove in time to have destroyed any hope for a united Iraq ever.

What is clear 25 years later is that the crisis transformed US policy in the Middle East. Before 1990, the region was a secondary or even tertiary area of importance to Washington. The United States had rarely deployed military forces in the region. It had a handful of military bases during the early years of the Cold War in Saudi Arabia, Libya and Bahrain but only the latter was still open in 1990. It had sent combat troops ashore once in 1958 in Lebanon but they had withdrawn quickly. Small military operations in Iran (1980) and Beirut (1982) were complete disasters. In the last stages of the Iran-Iraq War, the US Navy had decimated the Iranian navy, but it was a brief affair.

In 1990 and 1991, the United States deployed a huge army to Saudi Arabia and then fought and destroyed much of Iraq’s army. After the war, US military forces stayed in the kingdom and in Kuwait in significant numbers. More bases came in Qatar and the UAE. In 2003, President George W. Bush launched another war with Iraq and US military forces, except for a brief interruption, have been in Iraq since. What had been a backwater for the US military has become since 1990 the principal arena of conflict. This shows no sign of ending anytime soon.

Of course, the end of the Cold War, which coincided with the Kuwait crisis, helped reshape US priorities. The CIA’s covert war in Afghanistan had defeated a Russian army without a single American casualty. The coincidence of the Kuwait crisis and the end of the Soviet threat did transform the world, as the elder Bush rightly described in his memoirs.

The Kuwait war also fundamentally altered US policy toward the Arab-Israeli conflict. Before 1990 it was only rarely a US priority. American presidents tried to resolve parts of the conflict, not the fundamental cause of it. President Richard Nixon avoided the Palestinian issue, President Jimmy Carter brokered a separate peace with Egypt that sidelined the Palestinians and President Ronald Reagan tried to ignore it. After the liberation of Kuwait, Bush convened the Madrid conference and focused on the Palestinian issue. His successors have spent two decades unsuccessfully trying to resolve it.

The crisis of the summer of 1990 also transformed America’s relationship with Saudi Arabia. The kingdom was already America’s oldest ally in the region, an alliance that dated to 1945 but the partnership was usually at arm’s length, distant and opaque. The Aug. 5, 1990, National Security Council meeting in the Cabinet Room that agreed to send troops to the kingdom changed that profoundly. In fighting Saddam, the United States and Saudi Arabia became much closer partners. In many ways, it was Saudi advice that persuaded Bush to go to Madrid and to press the Palestinian issue to the forefront of US diplomacy. While American troops left Saudi Arabia in 2003, the US military provides intelligence and logistical support for the Saudi war in Yemen today. While neither Washington nor Riyadh wants to highlight America’s role in the Yemen war — without access to continued American munitions, spare parts and intelligence — the Saudis would not be able to conduct the air war.

The Saudi decision to accept Bush’s offer of American troops in August 1990 began its break with Osama bin Laden and what would become al-Qaeda. His offer to raise an Islamic army to fight Saddam was rejected by the House of Saud. Choosing US military help 25 years ago began the path that led to al-Qaeda and the Islamic State declaring war on the kingdom and the United States. That war has no end in sight.

In retrospect, the crisis that began 25 years ago today was the critical moment in modern Middle East politics. America became obsessed with the region as never before. Today there seems no way out.