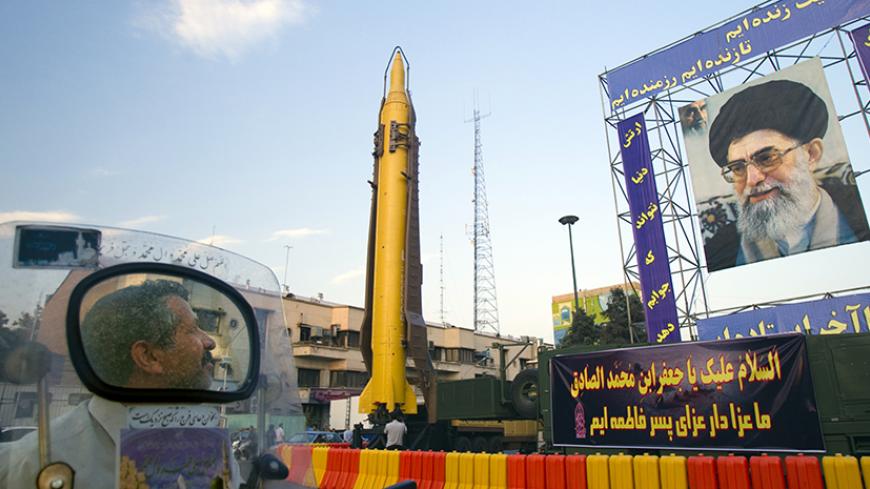 Iranian-made Fateh 110 (Conqueror) (L) and Persian Gulf (R) missiles are seen next to a portrait of Iran's Supreme Leader Ayatollah Ali Khamenei at a war exhibition held by Iran's Islamic Revolutionary Guard Corps to mark the anniversary of the Iran-Iraq War at Baharestan Square near the Iranian parliament in southern Tehran, Sept. 23, 2011. - REUTERS/Morteza Nikoubazl

The supreme leader of the Islamic Republic of Iran, Ayatollah Ali Khamenei, announced the general policies of the Sixth Development Plan to the Iranian president on June 30. All the major policies of the country are managed according to these development plans, which are published every five years. In the Sixth Plan, the section about strengthening Iran’s defense and security stands out as noteworthy.

In this section, Khamenei ordered the administration and the armed forces to:

In April, Ayatollah Khamenei met with military personnel and gave them a new order: “All organizations, including the Ministry of Defense, the military and the Islamic Revolutionary Guard Corps [IRGC], should increase their military and defense preparedness and increase their combative and mental capabilities on a daily basis. This should be taken as an official order.”

The order clearly shows that Iran is determined to expand the quality and the quantity of its armed forces. According to the latest report by the International Institute for Strategic Studies, Iran has about 500,000 active members in the armed forces and a budget of over $14 billion. Under the Sixth Development Plan, the administration is required to allocate 5% of the country’s entire budget to defense purposes. In this year’s budget, this means that at least $17 billion will go to the armed forces. However, considering the wide reach of the Iranian armed forces within the Middle East, this amount appears quite negligible.

The head of the parliament's Defense Committee, Esmaeil Kousari, said regarding this issue in 2014, “Based on the research done, currently Iran has the lowest defense budget in the region. This amount is only enough to pay the salaries of the employees.”

Nonetheless, in this year's budget bill, Rouhani’s administration increased the defense budget by 32.5% compared to the previous year.

This problem is also evident in military equipment. Although the IRGC comprises about one-third of the military forces, it receives a much bigger share of the weapons produced or imported by the Ministry of Defense. So far, the military has been mostly using pre-revolutionary weapons, making a large portion of its aircraft, individual weapons, naval fleet and heavy ground weapons outdated. The IRGC, meanwhile, has access to updated equipment such as ballistic missiles, unmanned aerial vehicles, anti-aircraft weapons, coast-to-sea missiles and modern personal equipment.

It is obvious to anyone who has visited the military stations that everything is out of date and eroded. At the same time, the IRGC personnel use the most modern tactical equipment and enjoy a vast amount of social rights and advantages as well as newly built facilities and bases.

However, interestingly, Khamenei’s order in the Sixth Development Plan includes, “to increase the defense abilities of the country within the regional balance of power.” One conclusion that could be drawn from this statement is that contrary to widespread propaganda, the Islamic Republic is not in fact a regional power. It may be that Iran’s desire to reach such a position, which according to the defense minister is for defense purposes only, stems from certain current challenges:

Turkey, which has NATO’s second-largest military and is the biggest military power in the region, is creating geostrategic and other problems for Iran in the north of Iraq, Syria and the Gaza Strip.

Saudi Arabia, which has the second-biggest military in the Arab world, and the most modern of the Middle East, is involved in a proxy war with Iran in Iraq, Syria, Yemen and Lebanon. Iran, which has already experienced air combat with Saudi Arabia, is concerned about the possibility of naval conflict, considering the Saudis' advanced fleet.

Operation Decisive Storm, conducted by Saudi Arabia with the strategic support of Pakistan, Turkey, Israel and the United States, alarmed Iran about the possibility of a coalition forming among its regional rivals, centered around Saudi Arabia. In such a scenario, Iran would have to face the modern and well-equipped militaries of regional countries with its own outdated and eroded one.

Nonetheless, in the past few decades, the Iranian Ministry of Defense, alongside the military and IRGC, has attempted to design and produce modern weaponry and equipment. Iran has had success in certain areas such as ballistic missiles, unmanned aerial vehicles, warships and overhauling its fighter jets and helicopters. However, just as the commander of the ground forces had previously asked the parliament to facilitate the purchase of new tanks, Iran is facing numerous problems in providing its armed forces with suitable and modern equipment. Among the reasons for these problems are the military sanctions imposed on Iran by the Security Council and the United States, Israel and the Arab countries lobbying against arms sales to Iran and the lack of financial resources to finance and purchase weapons and equipment.

The level of training and the fighting spirit of the Iranian armed forces, it is said, are much higher than those of other countries in the region. If Iran manages to find a solution to its budget deficiency and outdated equipment, it could quickly become the military superpower of the region.