The Rouhani administration has moved to cut spending for the IRGC while increasing funding for the army, but not without a backlash. 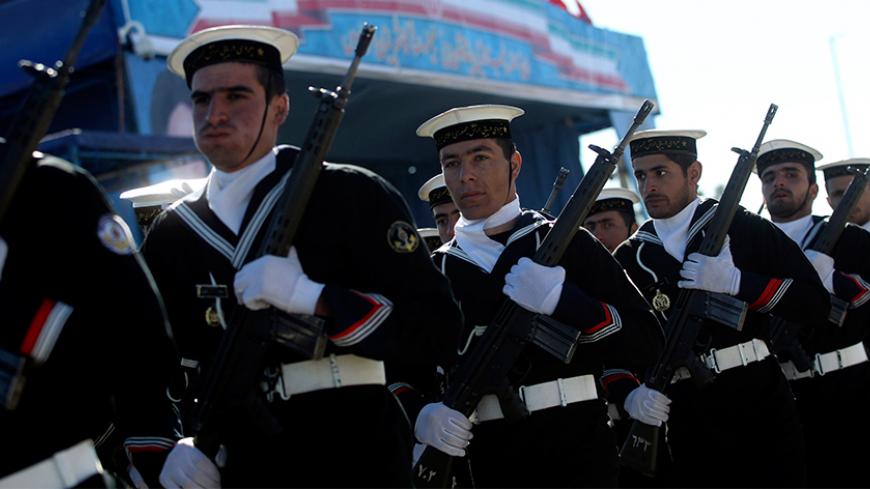 TEHRAN, Iran — President Hassan Rouhani presented a general budget bill to parliament Jan. 17 — one day after the formal lifting of nuclear-related sanctions — for the current Iranian fiscal year, which began March 20. More than three months later after its introduction, the bill is still being reviewed, in part because of the Iranian New Year holidays, with members of parliament’s National Security and Foreign Policy Commission taking a particularly close look at the details.

After the Management and Planning Organization released official budget documents for the current Iranian year in mid-March, shock spread through right-wing media outlets and publications. Many of them lashed out at Rouhani under headlines such as “The administration has decreased the defense budget.” Despite such assertions, was there actually a proposed decrease in the defense budget?

Based on the number of personnel employed by the Armed Forces of the Islamic Republic of Iran, the army has the most troops, weapons and military installations at its disposal. The Islamic Revolutionary Guard Corps (IRGC), possessing about one-third of Iran’s military power, is ranked second. Following them are the paramilitary Basij organization, the Ministry of Defense and the Armed Forces General Staff. Although the army's capabilities far exceed those of the IRGC, the latter always receives almost two times as much funding as the former.

In the fiscal year that began March 20, 2013, the first five months of which took place during President Mahmoud Ahmadinejad’s last year in office, Iran’s total defense budget was $6.24 billion. In the following fiscal year, beginning March 21, 2014, marking Rouhani’s first full year in office, the defense budget grew by $1.85 billion, bringing the total to more than $8 billion.

The increase was mostly because the Rouhani administration had to allocate additional funding to the IRGC for its spending in Syria, Iraq and Yemen. In other words, the IRGC, which was allocated $3.3 billion for fiscal year 2013-14, saw its budget grow to some $5 billion during Rouhani’s first year in office. This amount is separate from the revenue the IRGC brings in from the major economic enterprises in which it is involved.

Nevertheless, the Iranian defense budget reflects some major changes in the current Iranian fiscal year. Based on past trends, the army’s spending would typically be increased by 2-5% each year. For the first time in decades, however, the army’s budget is being increased by about 15%, from $1.5 billion to $1.75 billion. The Ministry of Defense, which is responsible for supplying military equipment, will also see an increase in allocated funding, from $770 million last year (ending March 19) to $890 million in the current fiscal year. The Basij and the General Staff have meanwhile each been allocated some 10% more in spending.

In contrast, the IRGC has had its budget decreased by some 16%. The $900 million cut brings its total budget allocation to some $4.1 billion. Although the decrease is considerable, the IRGC’s budget in 2013-14 clearly shows that the funding allocated is sufficient to cover all its costs, except for foreign expenses.

The changes sought indicate that the Rouhani administration is looking to implement structural reform in military spending. Unlike his predecessors, Rouhani wants to increase the quality of the armed forces by supporting the Ministry of Defense and the domestic arms industry and by paying more attention to the dilapidated army. Due to decades of negligence, the regular army is worn down and in dire need of funding to be reinvigorated. The current administration is very much aware of this reality and has therefore resisted demands by the IRGC for more funding even though it already has a bigger budget than the army.

Nonetheless, Iranian parliamentarians, especially members of the National Security and Foreign Policy Commission, many of whom are retired IRGC generals, are looking to modify the budget bill. At an April 8 session, lawmakers decided that 10% of funds related to Amendment 3 — which sets the upper limit of foreign expenditure credits at $50 billion in local currency — will be allocated to the defense industry. The change is based on a proposal by Esmaeil Kowsari, a retired general and commission member, that 10% of the country's financial credit be used to buy new military equipment.

Hassan Sobhani Nia, deputy head of the National Security and Foreign Policy Commission, said March 23 in an ICANA interview, “With the decision made by the MPs in the joint commission, in the [current Iranian] year 1395, about 5,000 billion toman ($1.65 billion) from the released [foreign-held] assets [unfrozen as part of the nuclear deal] will be used for strengthening and supporting the country’s military and defense capabilities.”

The budget submitted to parliament clearly demonstrates that the Rouhani administration is determined to address Iran's domestic and international military and security needs. As such, the bill can analyzed in two ways.

First, by reducing the overall military budget, the administration has shown its interest in decreasing the country’s military expenses as well as its interest in alternative investments in other economic sectors. More important, it has clearly demonstrated that it is not interested in increasing military expenditures abroad, including in Iraq, Lebanon and Syria.

Second, by noticeably increasing funding for the army and the Ministry of Defense, the administration has shown its determination to implement structural reforms by providing more money to poorly maintained organizations, such as the army, and by increasing the quality of training, equipment and weapons, as well as offering more support to the Ministry of Defense. Indeed, this government has supported and strengthened the ministry more than any other administration in the history of the Islamic Republic. It has even engaged in intensive negotiations with other countries with the aim of purchasing new equipment, including fighter jets.

All in all, the government’s proposed budget bill and its relationship with the armed forces show that the administration is seriously looking to improve the structure of the military and to ensure that the structure holds. This is particularly important since Iran’s rivals in the region — Israel, Egypt, Turkey, and Saudi Arabia and other members of the Gulf Cooperation Council — are constantly increasing their military expenditures, fueling an arms race.