Iran’s educational system is under increasing strain as small increases in budget allocations and teacher salaries fail to catch up with chronic deficits. 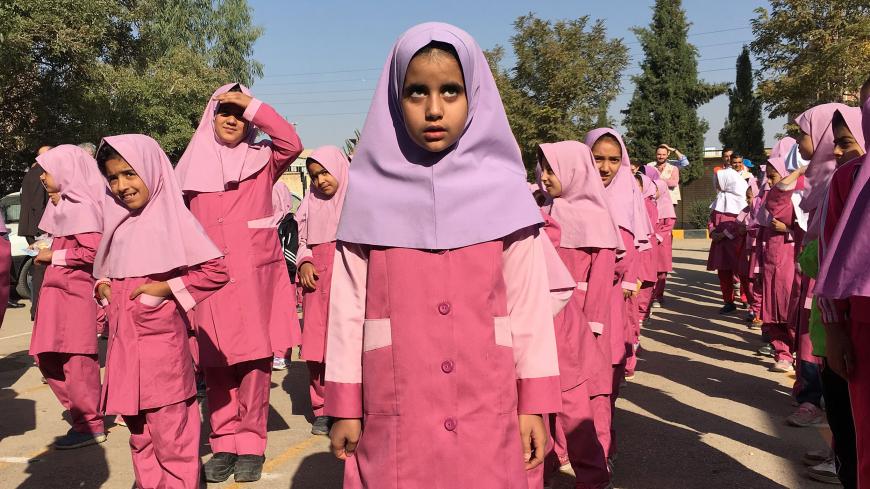 While public spending has risen by 40% overall in the proposed budget, the educational system’s allocated resources have only increased by 28%. However, in comparison to other state entities, the increase in educational spending has been notable. Administration officials attribute the difference to President Hassan Rouhani's considerations for education.

Yet spending on education remains at an average of less than 10% of the budget. The highest proportion was seen in the final year of Reformist President Mohammad Khatami’s administration (1997-2005) and the first year of conservative President Mahmoud Ahmadinejad’s administration (2005-13), at 15.2%. Since then the figure gradually decreased, reaching 7.3% in the final year of the conservative president’s rule.

With the election of Rouhani in 2013, the share of spending on education in the budget gradually increased, reaching above 9%. But despite this increase and particularly in the next Iranian fiscal year, education in Iran still faces extensive financial issues, prompting yet another round of teacher strikes. Given the enormity of the problems, the current trend does not appear promising.

The Education Ministry has been struggling for more than a decade with a growing budget deficit. Parliament member Hamidreza Haji Babaee — who served as minister of education in Ahmadinejad’s second term — puts the deficit in the current Iranian year at 50 trillion rials ($1.19 billion). For the next Iranian year, he expects another 80 trillion rial deficit ($1.9 billion), for a combined 130 trillion rials ($3.09 billion), almost a third of the ministry’s total budget. Even if the government sets the official exchange rate at 57,000 rials per dollar from March 21, as expected, the projected total deficit by March 2020 will stand at a whopping $2.28 billion.

The deficit has had a direct impact on the performance of the Education Ministry — the largest government ministry in Iran — limiting its ability to address its growing problems.

One of these issues is public access to education. While Iran has experienced major strides in this respect since its 1979 Islamic Revolution, there is still a long way to go to make education accessible to all Iranians. According to official data, access to education is 99% at the elementary level, 94% at the lower secondary level and 82% at the upper secondary level. Some experts argue that these estimates are high. Even taking the available data at face value, it is evident that more spending is required to achieve the goal of making education fully accessible to all Iranians at all levels.

Comparatively low teacher salaries are another major challenge. A crucial pillar of any high-quality educational system is its teachers. As a consequence of the financial difficulties faced by Iran’s education sector, teachers have experienced and expressed discontent for decades. The situation has further deteriorated with the reimposition of US sanctions on Iran, which have not only hit state finances directly by impacting oil export revenues but also led to a major increase in consumer prices due to the depreciation of the rial.

Teacher salaries are low in comparison to those of other state employees. The average annual income of Iranian teachers in the current fiscal year stands at 324 million rial ($7,714). To address the pressures faced by teachers and other state employees, a fixed 4 million rial ($95) wage increase and a 10% raise on top of that amount has been proposed by lawmakers. However, even then, the annual salary of an Iranian teacher would be far below the average of $23,000-27,000 in neighboring Turkey. One of the causes of teacher protests during the last two decades has been this wage gap. Yet, regardless of his promises to pay more attention to such issues — and despite the proposed wage increases — Rouhani has not addressed teachers’ demands in a satisfactory manner. As long as these demands are not met, it is evident that high-quality education will remain out of reach.

The budget deficit and resulting financial difficulties have created other challenges. For instance, middle and lower-level managers in education have in effect gotten the green light to accept and rely on funding from students' families to run public schools. Furthermore, using the budget deficit as a justification, consecutive administrations have pursued an effective privatization of education, even though Article 44 of the Iranian Constitution has a clear emphasis on providing free education through upper secondary school.

While the implementation of privatization schemes by past administrations was pursued in a fairly covert manner, this process has rapidly advanced since Rouhani took office in 2013. Unlike previous officials who ostensibly sought to impede informal payments by families to public schools, ministers of education in Rouhani’s cabinet have been trying to formalize these payments. Although there is resistance among civil society and some governmental institutions, the difficult domestic and international conditions — including the unfavorable economic situation — have paved the way for greater privatization of education. Of note, the privatization process under Rouhani has not been limited to the establishment of private schools but also includes selling or renting public schools to the private sector, increasing the working hours of formally employed teachers, hiring more teachers on short-term contracts, increasing the retirement age as well as buying educational services from private actors.

Although lawmakers possess the power to increase educational spending in the budget for the next fiscal year, past experience indicates that such a move will not bring it above 10% of the budget. Given the current economic circumstances in Iran as well as US pressures, there is little hope for effective change. Yet even a moderate increase in educational spending could solve some issues while curbing the exacerbation of others. As such, it is hoped that the parliament will in the short term increase the spending on education in the public budget as much as possible, and in the longer term, approach it in a way that shields students from the fiscal deficits burdening the educational system.