A lack of government schools in Ramallah is forcing residents to pay for private education, while the government makes plans to resolve the problem if the necessary budget becomes available. 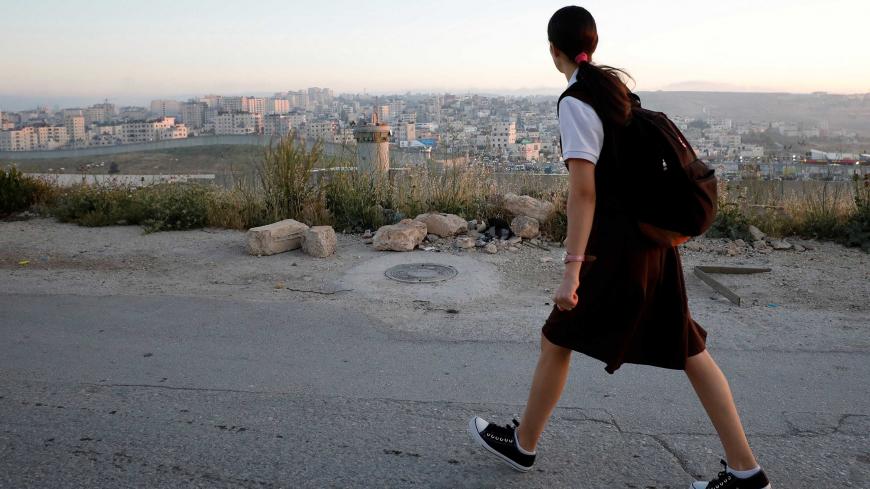 RAMALLAH, West Bank — The family of first-grader Jalaluddin Abdul Hadi was still hunting for schools a week after the school year started on Aug. 23. They managed to find a place for him at a public primary school close to their home in central Ramallah, just a quarter of an hour away by car, though it would be hard for the little boy to get there by foot. It was not the first time the family has faced this challenge. In 2011, they had to register their older son in a private school so he could get there by bus.

Ramallah suffers from a lack of public schools, especially in residential areas, while private schools that offer bus transportation to the students abound in the city.

Jalaluddin’s father Mustafa bemoaned the expense of private education. He currently pays around 10,000 shekels ($2,800) in fees per year for his older son. These fees increase $100 every year. There are also registration fees, the cost of school uniforms and other expenses. He cannot afford to pay double now that his younger son has reached the first grade.

To solve the problem of transport, Mustafa reached a deal with a taxi driver to do the school run twice a day for 600 shekels ($175) per month, another cost for the family just to send their second son to a government school.

The Abdul Hadis are not alone. Many families rely on Ramallah’s growing network of private schools. An average of one new private school opens every academic year, while government schools are not being built to meet the demand created by the city’s rapidly growing population.

Ramallah now has around 120,000 residents, many of them transplants from elsewhere, but only eight government schools. There are 15 private schools, including the recently opened Lycee Francais de Ramallah.

The Teachers’ Creativity center is a nonprofit Palestinian institution based in Ramallah that focuses on educational development. Its head, Rafat Sabah, said the shortage of public schools threatens citizens' right to education. He said it is the government’s duty to find solutions so people are not forced to send their children to private schools.

Sabah told Al-Monitor, “The lack of government schools has encouraged people to use private schools, and the fact that Ramallah is where most wealthy Palestinians live has not helped. The large number of private schools has allowed the government to shift the responsibility of providing education onto the private sector.” The situation, he said, does not make for a healthy educational environment.

“We fear that public education will be neglected in favor of private schools,” he said. Sabah accused the government of failing to fulfill the Sustainable Development Goals for 2015-2030 it signed on education. The goals stipulate that education should be free, compulsory, universal, equitable and lifelong. He said the sector needs a lot of improvement for free education to reach the level of that provided by private schools.

The Ministry of Education’s head of public education, Ayoub Alyan, agreed that the lack of schools is a real problem in Ramallah. He blamed it on the city attracting many new residents from other areas of the West Bank controlled by the Palestinian Authority. The ministry has been unable to keep track of the rapid population growth, he said, and the lack of good data on the increase makes finding outside sources of funding to build schools more difficult.

The ministry relies on joint projects with the municipality to build schools, and they do not have the necessary budget to keep up with the city’s population growth and demand for new schools, Alyan told Al-Monitor.

Ramallah Mayor Mousa Hadid agreed. “There are ongoing efforts to meet these needs, but the plans come up against the municipality’s financial capacities,” he told Al-Monitor. “The growth in demand for education can’t be met financially, especially given that the municipality is also maintaining and expanding existing schools, which takes up a large portion of its budget.”

According to Alyan, a plan to solve the crisis involves the purchase of land to build two new schools, one of them a primary one, in the central Ayn Misbah district. It could go a long way toward solving the problem, he said. Meanwhile, an existing school, Ziyad Abu Ayn, in al-Tira district, is to be privatized and renovated for primary school students.

Alyan denied that the government was shifting responsibility to the private sector. “The government is making moves to solve this problem by building new schools, redistributing students among the existing schools” and changing the grade levels that some schools serve, he said.

Sabah said the best solution would be to allocate more funds to the education sector, raising its share of the budget from 20.1% to 24%. “The solution lies in making education a priority, rather than waiting for external funding,” he said. “The fact is that 97% of spending on education comes from taxes the PA collects from the public.”

The problem will remain as long as education is not made a priority for government spending, and for now residents must foot the bill of a decent education for their children.