Residents of the Rosh Tzurim settlement have been supporting and operating a summer camp for special needs children for many years now, welcoming Israelis and Palestinians. 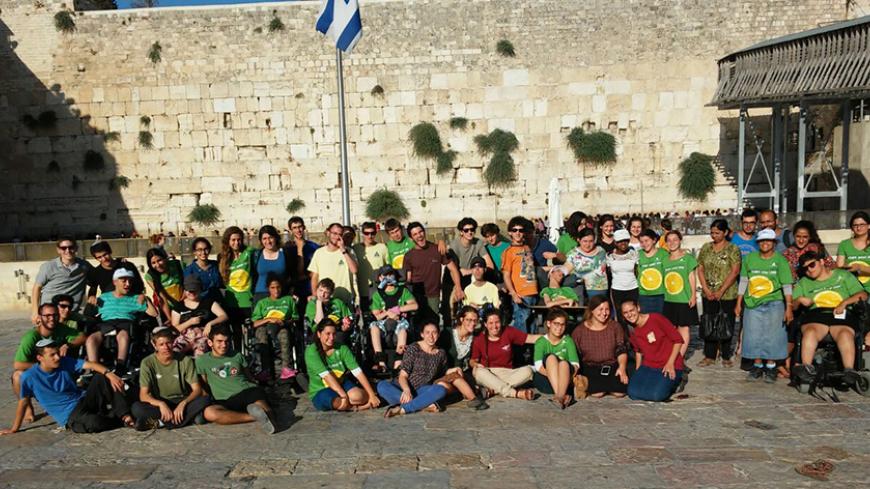 A joint summer camp for special needs Jewish and Arab children has been taking place for the last 25 years in the community of Rosh Tzurim. Although joint Arab-Jewish summer camps take place in a number of communities across Israel, what makes this project unique and inspiring is the fact that Rosh Tzurim is a religious settlement in the Etzion bloc. The camp takes place during the nine days preceding Tisha B'Av, the day on which Jews mourn the destruction of the First and Second Temples and fast. This nine-day period is traditionally devoted to repentance and acceptance. All the community’s residents — young and old alike — come together to make this summer camp a special experience for the children, most of whom have serious disabilities.

“People say that we’re an island of sanity amid the madness around us,” Uri Shechter, a resident of Rosh Tzurim and one of the camp’s organizers, told Al-Monitor. “But we do this with great love and out of the belief that peace is made between people. Leaders can talk, hate and swear. Yet we and our neighbors have had good neighborly relations for years.”

All the residents are volunteers and organize activities free of charge to the participants. This year, for instance, the children took part in a chocolate workshop, horseback riding activity, cupcake baking class and a performance by “clown doctors.” Despite the kidnapping and murder of the three Israeli youth in June 2014, followed by Operation Protective Edge in the Gaza Strip and rockets being fired into Israel, the residents of Rosh Tzurim thought it was important to organize the summer camp as usual. “Our Palestinian neighbors were very angry [at the kidnappers] at the time of the kidnapping,” Shechter said. “They don’t think that all settlers have horns or that they’re the enemy.”

The summer camp is organized by ILAN, the Israeli Foundation for Handicapped Children. Most of the children who participate have extensive special needs, and each boy or girl is assigned three adult teens from the community who escort them and assist them during the weeklong camp. This year, too, the summer camp was made possible thanks to the generosity of the residents of the settlement who again donated money to the tradition that has become their pride and joy. They feel it is important to show that coexistence between Jews and Arabs is possible, even in a settlement community.

“It was just an hour ago that three girls showed up at our place with an Arab child whom they took care of,” Shechter said. “They spent the entire day with her, from sunrise to sunset, during the recreational activities. They shared her experiences and saw to all her special needs. And these children have needs that require round-the-clock care. The adults also stay with the children at night.”

The summer camp in Rosh Tzurim is open to children from Jewish and Arab towns across Israel, as well as Palestinian children from the West Bank. For many this is the first time they meet someone from a different faith. “We try to teach the children not to hate,” Shechter said. “To the Jewish children we explain that the Palestinian next door isn’t our enemy. It’s complicated, but all in all we succeed even with the toughest things.”

Yana Singin, a child with cerebral palsy, talked to Al-Monitor about the joint Jewish-Arab camp. She said, “Every person is a human being and it doesn’t matter where they come from. We need to accept and get to know each other.” Her counselor, Yaira Jason, said, “For the children it’s pretty straight forward. They don’t care if one participant is called Mohammed and the other one Yana. We are here to give them love and give their families a little breather from this intensive care. Sometimes I might not agree with the views of their families, but we don’t get into politics at all. This is a summer camp and what’s important is to get to know each other.”

Noga Feingold, the executive director of the camp, told Al-Monitor, “We are here to volunteer and help children with disabilities. I take everyone in.” As part of the cooperation and the warm relations that have been fostered over the years, some of the counselors remained in touch with the children after summer camp and visited them at their homes.

Shechter added, "The children bond. We had a girl whose house was very hard to reach. A few guys from Rosh Tzurim built a concrete ramp so that she could have easier access to her home with her wheelchair.”

But the rosy reality that the organizers depict isn’t always present. This year, for instance, all the children went to Jerusalem, and one of the stops was a visit to the Western Wall. One of the Arab mothers asked that her son not visit the site. The organizers decided to respect her wish. Over the years there have also been Jewish counselors who asked not to work with Arab children. The organizers of the camp also respected this request. “We respect the difficulties. They exist and we can’t ignore them,” Feingold said. “We don’t force anyone to do anything because we understand this is a situation that could, sometimes, cause certain uneasiness.”

Shechter added, “I always use the Knesset as an example. Knesset members swear and hate each other at the plenum. But when they sit down at the cafeteria they smile at each other. We have the leadership that feeds on the conflict, but we also have the people on the ground. There are problems, unpleasant things, but all in all, your ordinary Joe, both in the settlement and the Arab village nearby, isn’t looking for a conflict. I, for instance, have close ties with the neighbors in the nearby village of Khirbet Zakariya. At night I can go there and have coffee and nothing will happen [to me]. They welcome me with open arms. When the mukhtar, the village leader, passed away, we went to pay our respects. It is people, human beings who make peace, and this is something we do every day.”