Jews, Christians and Muslims have all made Jerusalem's Ein Karem neighborhood their home over the centuries. 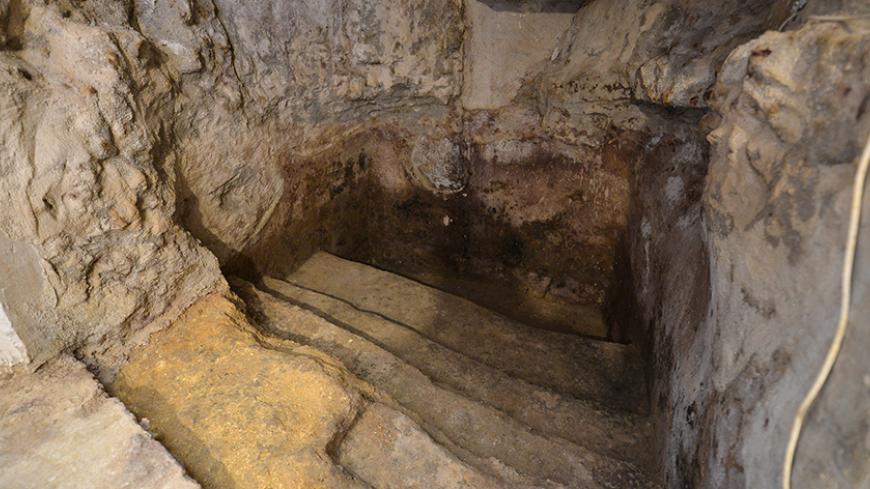 An ancient ritual bath, or mikveh, is seen beneath a house in Jerusalem's Ein Karem neighborhood, in this photo taken in July 2015. - Eli Segal

In early July, an ancient mikveh, a ritual bath in which observant Jews dip to purify themselves, was discovered in the pastoral Jerusalem neighborhood of Ein Karem. The 2,000-year-old mikveh, which would have been filled with rainwater, was found during renovation work on a home in the neighborhood. It was well preserved, down to some stone and clay tools on the pool floor, and probably served its owners at the time of the Second Temple. The unearthing of the mikveh strengthens the evidence of a Jewish link to ancient Ein Karem, the Arab-Palestinian and Christian links having already been established.

“There’s no other village like it in the whole world, the history of which pertains to the heart of Christianity, Judaism and Islam,” Moshe Amirav told Al-Monitor. A professor and resident of the neighborhood for some 40 years, Amirav has written two books on the village and is considered an international expert on its history. “The Jewish story is the habitations of Jews in the village for 1,000 years — a place where, according to various sources, the stones of the temple altar were built. The Christian story recounts how Elisheva, the mother of John the Baptist, met her cousin Miriam, the mother of Jesus, at the lip of the village well when both were carrying their sons in their wombs. The Muslim story is that of Omar bin al-Khattab, the conqueror of Jerusalem, who rested in Ein Karem and drank the water from its well that gave him the strength to capture the city.”

Archaeological evidence of the Jewish connection to Ein Karem has only been found in recent years, beginning with the 2004 discovery of a mikveh in the village. Amirav had found a cistern in the John the Baptist Church that turned out to be a purification bath. That discovery drew international attention and was the first evidence of a Jewish link to ancient Ein Karem, a connection that until then had only been cited in texts.

Now a second mikveh, large and impressive, has been found. “We were very excited by this discovery,” said Uriyah, a poet who lives with her partner, Tal, and their six children in the house where the mikveh was found. Requesting that her full name not be divulged to avoid droves of curious tourists, she told Al-Monitor, “This connected me very much to our Jewish heritage. For us, every descent into the space of the mikveh is a kind of descent through the tunnel of time.”

Tal, on the other hand, is unmoved by the Jewish aspect of the finding. “Religion doesn’t mean anything to me,” he said. “There’s an archeological find here, and that’s what’s important.”

“Mikvehs are fairly common in archaeological digs, and almost every house from the period of the Second Temple had one,” Amit Ram, the Jerusalem district director for the Israel Antiquities Authority told Al-Monitor. “What is special in this case is the location of the mikveh in Ein Karem, as well as the mint condition of the finding.”

The story of Ein Karem begins in the Canaanite period. Jews first settled there in the days of the First Temple, around the eighth century BCE. They lived in Ein Karem until the first century CE, when the Second Temple was destroyed. Jewish settlement there then stopped for some 2,000 years, until the end of the 1948 War of Independence.

In the fifth century, the Muslim conqueror Omar bin al-Khattab, considered the founder of the Muslim Empire, stopped in the village, which had been deserted for hundreds of years. The place continued to be deserted for hundreds of more years, until the 12th century, when the crusaders arrived and built churches there. Records show that in the 15th century, a large contingent of Moroccan Muslim dervishes came to Jerusalem, and the sultan of city sent them to Ein Karem, which had a plentiful water supply, to grow vegetables. In the 16th and 17th centuries, Christians from Bethlehem went to Ein Karem and settled there. At the beginning of the 19th century, the village's population was about two-thirds Muslim, one-third Christian and just a few Jews.

In recent years, Ein Karem has become a pilgrimage site for Christians from all over the world as well as an upscale Jewish neighborhood. Gourmet restaurants and boutiques abound along the steep, narrow stone lanes for which the village is famous. Ein Karem is located on the side of a mountain in the southwestern corner of Jerusalem, but although it is part of the municipal city, it retains a calm, bucolic air, being relatively cut off by mountains, valleys and woods.

Earlier this year, a request was submitted to UNESCO to designate Ein Karem a World Heritage Site in an effort to prevent new construction, which could damage its character. In response, a large group of Palestinian refugees who left the village in 1948 sent UNESCO a letter objecting to the designation. They argued that designating the place a heritage site could enshrine Ein Karem as a Jewish heritage site, pushing aside its Palestinian heritage and reducing the chances of their winning their right of return to the village.

This is most likely the reason why many of Ein Karem’s Jewish residents were relieved by the discovery of a mikveh there. “I am certain there are Palestinians who lived here in Ein Karem and left or were expelled during the events of the War of Independence,” said Aliza, an Ein Karem resident I met in the neighborhood grocery store. “But when it turns out that the Jews have such a deep link to the history of Ein Karem, it begs the question of whether we are conquerors or liberators.”

The neighborhood of Ein Karem represents a historic memory for the three religions of the Land of Israel. There are not many physical findings. No biblical fables have been linked to the village, and it does not have a history of continuous settlement. Ein Karem is, however, a significant axis in the history of Judaism, Christianity and Islam. Starting with the Jewish community that settled there during the First Temple, through the announcement of the birth of Jesus Christ to the world and the Arab conquest of Jerusalem. If there is one place that symbolizes heritage in the full sense of the word, that place is Ein Karem.