Shimon Peres outlines his vision for Israel, the region in 2048

Former President Shimon Peres argues that despite the current dire situation, Israel's future is not bleak. 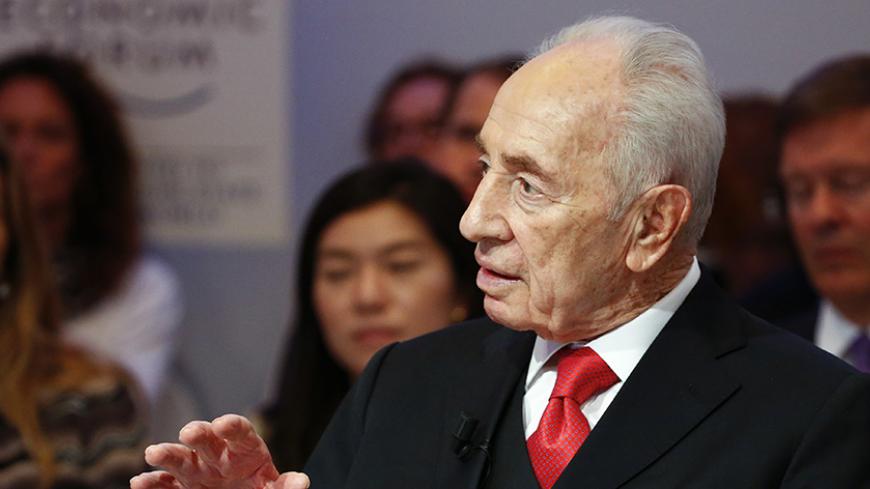 In 2048, Israel will celebrate its first century as an independent state. Seen from today’s perspective, the future appears mostly bleak. Israel’s conflict with the Palestinians seems less solvable than ever, while the Arab neighborhood is in complete turmoil, taken over by a violent struggle of identities between extremist Muslim fundamentalists, dictatorial military rulers and a more pragmatic but disorganized young generation. Terror and executions contrast with social networks as the languages of the day. Hostility toward the West, the United States and Israel is rampant. At the same time, the Israeli government is firming up its hold on the West Bank through an aggressive settlement expansion policy, preventing any possibility of a two-state solution. Gaza, meanwhile, is witnessing dangerous radicalization following its devastation in last year’s war with Israel and struggles between Hamas and more radical Islamist forces.

Israel’s international position is at an all-time low. The world rejects Israel’s occupation of the West Bank, considering it a form of neocolonialism. Relations with Washington are in severe crisis in regard to an eventual nuclear agreement with Iran and its policy in favor of Palestinian statehood. Domestically, Israel suffers from a severe social and ethical crisis, threatening its cohesion and its democratic fabric. The rift between rich and poor, center and periphery, religious and secular, Jews and Arabs, keeps growing, while the current government initiates legislations that curtail the rights of minorities. Many young Israelis seek their future in the German capital Berlin, of all places. Thus, Israel’s horizon seems cloudy, at best.

And yet, Nobel Prize laureate, former President Simon Peres — Israel’s foremost nation builder and statesman — is completely unimpressed with those pitfalls and obstacles on Israel’s road to a better future. During a long chat about Israel’s future, he told Al-Monitor, “2048 will be much better for Israel than people imagine and also for our region as a whole.”

His optimism is based on evaluating global development and progress and assessing their impact on Israel’s future relationships within the region and with the world. For Peres, scientific and technological breakthroughs are at the basis of progress and must be harnessed to the quest of social good. He said that if we could have a telescope showing us the year of 2048, we would not recognize the world, Israel or our region. He told Al-Monitor, “Science and technology will force people, also in our region, to be more open-minded to the world. It will also empower young people to contribute to progress in their societies. It is an unstoppable process, even by the preachers of hate and religious dogma.”

Technology, according to Peres, will transform and shape the identity of youth in the region, as young people will become fully interconnected within the region and with the world. Dictatorial regimes, including in the Arab world, will find it ever-more difficult to suppress open self-expressions of people on social networks. Freedom of expression will expand over time, and thus democracy will spread.

This greater social transparency, generated by technology and social networks, will contribute to a new global balance, Peres said. In the Middle East, it will enhance the balance between the right for equal chances and resources and the right to be different.

According to the former president, science and technology will lead to a more borderless world as interconnectivity across borders will also create new coalitions of interest and values irrespective of nationality. “With time, the main difference between people will be more in the realm of culture and language, rather than narrow nationalism. Our region, while progressing at a slow pace, will, over time, not be the exception.”

Borders, in his positive vision of the future, will become less relevant. And with that, he is fully convinced that a two-state solution will occur before 2048 and that future relations between Israelis and Palestinians will be mainly of an economic nature.

Peres, who saw so many Israeli governments come and go, is not naive. He is a man who believes that our destination, not our journey, must be defined and envisioned. He knows that the journey to a better 2048 will be difficult, marred with obstacles and even violence. Yet, he is convinced. Driven by his optimistic vision, he acts accordingly.

The past bores Peres. “It is filled with mistakes and written with the red ink of bloody wars,” he said. His great passion is Israel and its destiny. He believes that the Zionist revolution was one of moving toward self-reliance, not only in defense, but in comprehensive nation building; it was a move out of the ghetto. He believes today that the enormous scientific and technological potential Israel holds will eventually force the country to turn in the right direction — the direction of democratization, of coexistence in the region and of establishing a respected place among the nations. He is convinced that this will happen by the time Israel turns 100 years old.

Many cynics quarrel with Peres’ optimism and criticize him for it. Yet, one must remember that he has proven the cynics wrong many times, from the development of the Israeli aviation industry to the Israeli hi-tech revolution, both predicted and initiated by him long before others.

At the very least, talking to this Israeli statesman, one is left with the feeling that Israel’s future, 2048, lies in the hands of the Israelis.