Rwandan agronomists are studying techniques developed by Israeli students for fast, cheap and simple cultivation of the superfood algae spirulina. 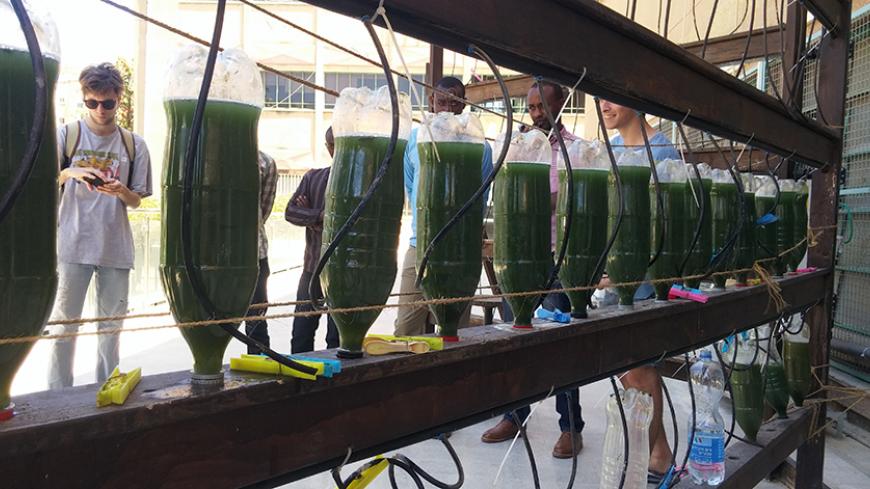 Jacques, Marcel, David and their colleagues — five young agronomists from Rwanda — stood in awe in front of a primitive contraption on the floor of the Herzliya Hebrew Gymnasium, a well-known high school in north Tel Aviv. It was a kind of wooden cabinet with dangling plastic soft-drink bottles bubbling with green liquid inside. This liquid is the news they will bring back to their country, where malnutrition is rampant. It's spirulina algae, a superfood that contains all the essential nutrients a human body requires.

The agronomists, all in their 20s, arrived for a one-year visit to Israel to study various aspects of Israeli agriculture and experience them firsthand. But according to Jacques Tuyishime, who lives in Kigali, Rwanda’s capital, the days they've spent learning how to grow spirulina have been the most significant for them, even though this topic was not part of their original curriculum. “We learned how to grow fruits, vegetables and flowers, but that won’t do us much good. The project of growing spirulina will help us address an acute problem in our country. The government is building centers where children are being fed because they don’t get adequate nutrition at home,” he explained.

In Rwanda, about 45% of the population lives below the poverty line, and the development of 44% of children under the age of 5 has been hampered by malnutrition.

The spirulina project is overseen by a group of dedicated students at the north Tel Aviv high school. About three years ago, during a philosophy class with the school’s headmaster, Zeev Degani, there was a discussion about world hunger. In its wake, the students decided to look for solutions that would allow them — fortunate students from Tel Aviv — to help their peers who suffer from hunger and malnutrition. In the course of their research, the students were exposed to a variety of algae until they zoomed in on spirulina.

“The United Nations declared this algae to be the ultimate solution to world hunger,” Degani told Al-Monitor. “The fresh algae has no taste, so you can just eat it with a piece of bread or on its own. It contains protein, omega 3, antioxidants, vitamins and minerals.”

The students were divided into groups and worked on how to cultivate it efficiently but without compromising its beneficial properties. “It was important for us to find a way to grow it under primitive conditions without having to resort to technologies that might not be found in the countries where the algae is needed — for example, additives.”

To produce magnesium, which is needed to speed up the process of growing the algae, the students buried nails and metal stakes in the ground, doused them with water and then scraped off the rust. They produced the required sulfate from sun-dried banana and mango peels. “We keep coming up with more and more ideas on how to grow spirulina in places where there is no electricity or running water. Edible algae can be produced in two to three weeks and it multiplies itself within two to four days. Five to 10 grams of spirulina is an ideal solution for a child,” Degani said.

The school project is not limited to growing the algae, but is also devoted to imparting the knowledge to do it. “The project is predicated on studying and teaching. I pass on the information, provided that the person receiving it shares it with others. Once the student has someone to teach, he knows more,” said Degani. That’s why the students, all of whom are volunteers, devote a great deal of their time to teaching the algae-growing protocol. Most of them teach younger age groups, and those who stay on longer with the project take part in teaching frameworks outside the school.

David Abimana, a member of the Rwandan delegation, told Al-Monitor, “I was very surprised. It’s amazing that such young kids can teach me those things.” He and his colleagues would like to go back to Rwanda and spread the project in schools. “I think it’s very appropriate for our country because we can let the children teach the solution for nutritional problems. It’s relevant to them. The problem is even more serious in west and south Rwanda. Spreading the project there could help the people who live in those agrarian areas, which are far from the center.” His colleague Jacques added that they can grow the algae in farming ponds inside the schools so that the students can feed themselves, saying, “This way we can do away with packaging, marketing and transporting the algae.”

For Anouk Savir-Kadmon, a 12th-grader and one of the main pillars of the project, the most alluring aspect is the opportunity to teach. “About a year and a half ago, we traveled to Cape Town to teach students from five schools. Some came from distant, poverty-stricken areas. It was inspiring to teach them and see how we can help. Not everybody spoke English, so we communicated through drawings and gestures. Within two days we saw how they pass on to others what they learned, and that was really awesome.”

The students in South Africa are still growing spirulina and have even won an innovation award in their country. But the delegation concluded that this project requires institutional support from African countries to finance its initial stages and spread the news. That’s how the school connected with the group of agronomists from Rwanda. The Rwandan agriculture minister heard about the project and asked the five agronomists, who were already planning to come to Israel to study for a year, to investigate the project and bring it back home.

The students, in collaboration with the NALA Foundation for treating parasitic diseases in Africa, are now preparing to send another delegation to western Ethiopia. “We were also invited to Congo, and there’s great interest in Nepal,” Degani said. A representative of the Belgian government also heard about it and is spearheading a Belgian-Palestinian-Israeli cooperation to study and spread the project, a plan that was shared at the 2015 Milan Expo. In collaboration with the UN Food and Agriculture Organization, the spirulina-growing protocol, as developed by the students, will be disseminated in all of the organization’s languages. Maya Savir, Anouk’s mother, was swept up in her daughter’s enthusiasm, wrote a book about it and became the voluntary director-general of the JustSpirulina nongovernmental organization set up to promote the project.

Other schools in Israel have yet to join in the effort, but academia has been showing keen interest. The Weizmann Institute wants to collaborate with the project, which has been introduced into the institute’s teacher-training curriculum. The students will help guide science teachers, with social considerations in mind. Over the next few weeks the spirulina-growing project at the Herzliya Hebrew Gymnasium will temporarily halt for the building of a large farming pond and training center, which — according to the vision — should become a magnet for groups from all over the world. The construction will be funded by the students, who will raise the money through the Headstart crowdfunding website.