Israel has canceled the permanent licenses of six Palestinian schools in East Jerusalem, alleging that their textbooks contain "incitement" against it and its army. 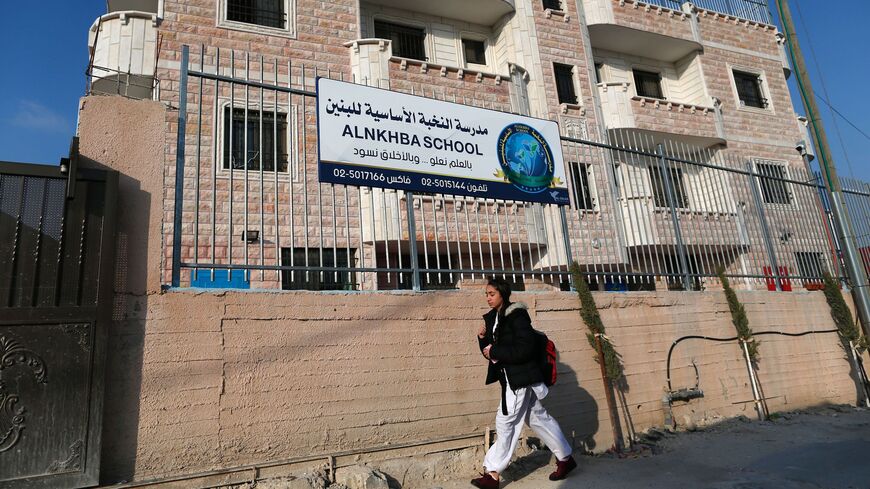 A school girl walks past the Al-Nkhba School, a private Palestinian school in the Sur Baher district of Israeli-annexed East Jerusalem on Feb. 23, 2017. - AHMAD GHARABLI/AFP via Getty Images

RAMALLAH, West Bank — Israeli Minister of Education Yifat Shasha-Biton revoked on July 28 the permanent operating licenses of six Palestinian schools in East Jerusalem, under the pretext that their curricula contain “dangerous incitement” against the Israeli government and army. The six schools will be granted a conditional one-year license to amend their curriculum or lose their license entirely.

The schools teaching the Palestinian curriculum and targeted by the decision are Ibrahimieh College and five schools run by the Al-Eman Schools organization. Together, the schools have around 2,000 male and female pupils.

On this matter, the Israeli Education Ministry said in a statement that the textbooks content of the targeted schools involves “the glorification of prisoners and their armed struggle against the State of Israel, conspiracy theories about withholding treatment from patients and intentional harm to medical staff, accusations of [Israel] being responsible for the water crisis in the Palestinian Authority (PA), and grave claims about killings, displacements and military massacres.”

The Israeli decision unleashed Palestinian condemnation. The Palestinian Ministry of Education held that revoking the licenses of six private schools in the city of East Jerusalem because they are teaching the Palestinian curriculum falls within the framework of the Israilization of education.

In a statement released July 29, the ministry described this step as a flagrant violation of the right of Palestinian students to education in the capital, Jerusalem, since teaching the national curriculum is one of the basic rights guaranteed by international conventions, treaties and covenants.

The ministry stressed that it is following up on the matter with international human rights and legal institutions, such as UNESCO, UN institutions and friendly countries. The ministry urged them to assume their responsibilities and to compel Israel to enforce laws and agreements on the right of Jerusalemite students to education freely and with dignity.

The ministry also denounced the decision against Jerusalem schools as “an act of war on the collective national identity, and a distortion and falsification of facts.”

Sheikh Jamil Hamami, executive director of Al-Eman Schools, told Al-Monitor, “The Israeli decision is a major challenge for our schools. It infringes on the Palestinian curricula, which has been approved and taught for years. This decision is an attempt to obscure the truth.”

Hamami denied any incitement against Israel in the curriculum, arguing that the curriculum rather includes a narration of facts and a realistic description of the situation. “The Jerusalemite people, since they are under occupation, have the right, according to international laws, to study in their schools a content that is aligned with their culture, their city and their civilization,” he said.

He stressed that Al-Eman Schools and the Ibrahimieh College are prestigious educational institutions from which hundreds of students graduate annually. “This decision will cause great harm to these schools. The Board of Trustees of Al-Eman Schools is currently in session to discuss the repercussions of the decision and how to deal with it.”

There are many educational authorities regarding schools in East Jerusalem, and they include Israel, the PA, the UNRWA, Jordan and the private sector. Since 1976, Israel has been taking measures and decisions affecting education in the city through various measures, such as limiting the construction of school buildings and pushing schools to change their curriculum.

Samir Jibril, head of the PA's Education and Higher Education Department at the Directorate of Education in Jerusalem, told Al-Monitor that Israeli authorities are using the pretext of inciting materials in the curriculum to withdraw school licenses, but their main goal is to prevent the Palestinian curriculum from being taught and replace it with the Israeli curriculum.

Jibril lamented the dire situation of the education sector in East Jerusalem in light of Israeli interventions and measures. “In 2011, the Israeli Ministry of Education reprinted the Palestinian curriculum taught in Jerusalem schools after introducing major changes and distortions. It even removed the logo of the PA and the Palestinian flag as well as all lessons about the Palestinian cause, adherence to the land, the right of return, Palestinian prisoners, settlements and settler migration to Palestine, military checkpoints, the intifada and displacement of [Palestinians] from their villages. Israel replaced these lessons with useless content to keep the young generations from getting attached to their national identity,” he said.

East Jerusalem has about 98,000 students. Around half of this number, i.e., 45,500, study in 146 schools (endowments, private schools, UNRWA schools) that teach the Palestinian curriculum. The other half study in schools affiliated with the Israeli Ministry of Education.

For his part, the PA's deputy governor of Jerusalem, Abdullah Siyam, told Al-Monitor that Israel has always been targeting education in East Jerusalem by seeking to compel schools and teachers to be affiliated with Israeli authorities and to teach the Israeli curriculum instead of the Palestinian one. “But these attempts have always triggered disobedience and strikes led by a group of teachers spearheaded by teacher Husni al-Ashhab, who succeeded [decades ago] in keeping the [Palestinian] curriculum,” he said.

Siyam pointed out that Israel has been enacting laws to consecrate Israel as a Jewish state and its sovereignty over Jerusalem. “These laws allow Israel to target all sectors in the city, including education. But the attempts to impose the Israeli education and curriculum in Jerusalem will fail.

He added, “Education and schools in Jerusalem entail several legal issues. The lawyers of the six targeted schools can prevent the execution of the Israeli decision. The matter will be escalated and raised before the international community and UN institutions.”