Claims that the Iran deal will spark a nuclear arms race in the region ignore the fact that Israel been leading the Middle East's arms race for the last 65 years. 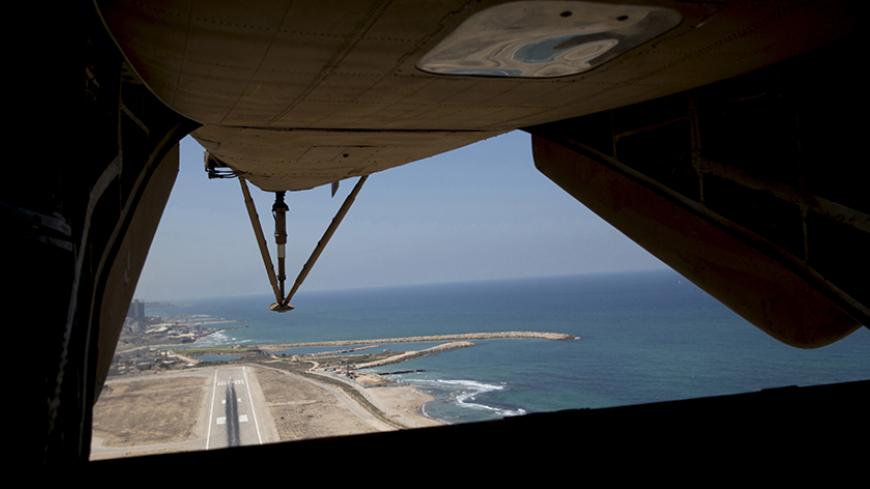 The Mediterranean Sea coast and a runway of Tel Aviv's Sde Dov Airport are seen from aboard a helicopter transporting media and staff accompanying the visit of US Defense Secretary Ash Carter in Israel, July 20, 2015. - REUTERS/Carolyn Kaster/Pool

The debate about the P5+1 agreement with Iran on its nuclear program has already produced a storm of angry rhetoric and a tsunami of opinion pieces. But one issue is notably absent from the debate: the fact that Israel has a nuclear weapons arsenal and sophisticated delivery systems that are decades ahead of anything Iran could develop in the foreseeable future. Iran should be constrained by a global regime from getting the bomb, but the notion that Israel is a weak powerless state like Czechoslovakia in 1938 is ludicrous.

The American intelligence community first detected the development of the Israeli nuclear weapons program through U-2 overhead imagery at the end of the 1950s. President John F. Kennedy pressed Israeli Prime Minister David Ben-Gurion very hard not to proceed with a weapons program, arguing it would precipitate a regional nuclear arms race. Under pressure from Kennedy, Israel agreed to American inspections of its French-supplied Dimona reactor, but then systematically blocked any serious inspection process.

Israel has never signed the Nuclear Non-Proliferation Treaty and has never admitted it has a nuclear weapons arsenal. The United States stopped protesting the Israeli program in the Nixon administration. Neither Jerusalem nor Washington publicly discusses Israel’s arsenal. If pressed, US officials refer to an alleged nuclear arsenal.

The Economist this year estimated Israel has 80 nuclear weapons in its arsenal. That puts it just behind India and far ahead of North Korea in terms of the number of bombs.

Israel has a triad of nuclear delivery systems. Its US-supplied F-15 and F-16 aircraft can deliver nuclear weapons anywhere in the Middle East. The Israeli air force has a well-deserved reputation as the best air force in the region with the best pilots. It has twice destroyed incipient nuclear programs in Iraq (1981) and Syria (2007).

France provided the early Israeli missile program with the technology for what is now the Jericho medium-range missile system. The latest version of the Jericho has a range of 5,000 kilometers (3,100 miles), according to experts.

The German magazine Der Spiegel has written about the third leg of the triad: German-built submarines. According to Der Spiegel, these U-boats called Dolphins are equipped with nuclear-armed cruise missiles. Five Dolphins have been delivered so far, a sixth is due in 2017. They can target Iran from the Mediterranean and from the Arabian Sea.

Israel has a right to develop a nuclear arsenal; it has been at war since its birth. It lives in a dangerous neighborhood that is getting more dangerous and chaotic. It has chosen to adopt an ambivalent posture about its deterrent for decades.

But it is not an impotent defenseless country. To suggest it is a Czechoslovakia-like weak state facing Hitler’s Germany in 1938 is to completely ignore the real balance of power in the Middle East. The Iranian deal may be flawed, but it is not Munich redux.

Moreover, Israel has the benefit of enormous amounts of American intelligence and military support, including more than $3 billion in grant aid every year. President Barack Obama has been very proactive in assuring Israel’s qualitative edge over any combination of foes. He has made clear he is prepared to do more if Israel asks.

The Iran nuclear deal will allow Tehran to increase its support to Hezbollah and Hamas. Both pose a threat to Israel. The Israeli military has demonstrated repeatedly that it is capable of dealing with these threats. The balance of power in both cases favors the Israel Defense Forces. Additional Iranian aid to Hezbollah will probably be used more in Syria to prop up Bashar al-Assad than to fight Israel.

Others allege Iran is a crazy state that cannot be deterred like normal states. The history of the Islamic Republic demonstrates that Iran is a rational actor, however, not a suicidal one. For example, in the Iran-Iraq War, when Israel secretly armed Iran, the ayatollahs demonstrated a rational approach to war with Saddam Hussein. When confronted by a superior Iraqi army backed by the United States, Iran accepted defeat. Iran’s preferred method of warfare is proxy wars where Iran fights to the last Lebanese, Palestinian, Syrian, Iraqi or Yemeni.