With no breakthrough in negotiations over Iran’s nuclear program, the Middle East could see power plays between Israel and Iran as undeclared nuclear powers. 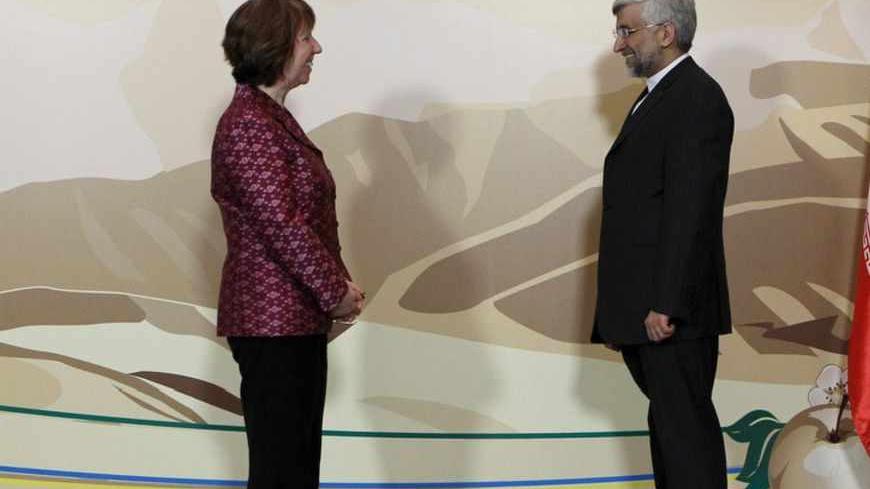 With no breakthrough expected in the negotiations over Iran’s nuclear program, a new scenario is beginning to loom: one of extended nuclear opacity in the Middle East. There is, indeed, a rising likelihood that in coming years the Middle East will become the scene of power plays between countries — i.e., Iran and Israel — holding nuclear arsenals without declaring their possession.

While admittedly no unequivocal evidence shows that Iran is seeking nuclear weapons, there are circumstantial reasons to believe that it is acquiring the energy supplies, technologies and scientific knowledge to build a nuclear deterrent. In an annual threat assessment, delivered 12 March to the US Senate, Director of National Intelligence James Clapper emphasized, “We do not know if Iran will eventually decide to build nuclear weapons.” Noting that Tehran “has developed technical expertise in a number of areas,” he added, “This makes the central issue its political will to do so.” This is why it is worth examining the delicate scenario of Iran acquiring nuclear weapons and choosing not to formally cross the Rubicon. In fact, statements from Iranian officials sometimes echo those of another country that several decades ago embarked on the path of nuclear opacity — Israel.

The expression “nuclear opacity” was coined in reference to Israel’s nuclear policy since the 1960s. Israel has neither signed the Non-Proliferation Treaty nor acknowledged possession of a nuclear deterrent. This calculus of nuclear opacity was based on two conflicting realities.

First, faced with countries challenging its existence, Israel found nuclear weapons to be the ultimate guarantor of its survival. Second, Israeli leaders, however, were also concerned that acknowledgement of its arsenal might trigger proliferation in the region. As a result, they maintained a policy of ambiguity regarding the country’s deterrent capabilities rather than denial per se. The rationale of this nuclear opacity was to convey to neighboring states the credibility of Israel’s nuclear arsenal, and the resolve to resort to it if necessary, while not officially acknowledging its existence.

Recently, some experts in Israel have called for a revision of this policy or have portended its impending irrelevance if Iran becomes a nuclear-armed state. For others, however, this reasoning is illogical. For the very reason that Iran may have its own nuclear opacity calculus, Israel has no incentives to change its policy. With the two countries adopting postures of denial, building a deterrence system is likely to be impeded. In such a context, one is left with an unprecedented situation of two undeclared nuclear powers engaged in strategic competition.

This scenario would be a major jolt for theorists of international relations who believe that deterrence will eventually work with a nuclear Iran because the regime remains a rational actor that would not start a nuclear war, thus preserving the status quo. The most meaningful illustration of this is Kenneth Waltz’s article in Foreign Affairs, “Why Iran Should Get the Bomb.” This appraisal is greatly influenced by NATO’s experience during the Cold War in dealing with the deterrence equation vis-à-vis the Soviet Union. This faith in the stability of deterrence is driven by a retroactive illusion in that it downplays the rules and processes that were designed by both poles to sustain stability in the long term. Strategic stability through nuclear deterrence is not a natural state, instead requiring sophisticated policies among all stakeholders to mitigate the risks of miscalculation.

Extended nuclear opacity in the Middle East means no channels of communication and no declaratory policies. It entails the absence of information on security perceptions, doctrines, capabilities and targeting policies. In the regional context, the logic of indirect conflicts involving Iran and Israel, possibly in Syria or Lebanon, will be altered in a way that could lead to accidental miscalculation and escalation.

As a flashpoint in the shadow of nuclear competition between Israel and Iran, take as an example a clash between Israel and Hezbollah. Since 2006, the Israel Defense Forces (IDF) have trained for a full-scale, swift, high-intensity campaign relying on deep bombing of south Lebanon and Beirut with the aim of decapitating Hezbollah. Meanwhile, assume Hezbollah has reinforced its rocket and missile arsenal so that it can reach most key civilian areas in Israel. In short, Hezbollah’s capabilities are no longer weapons of mass annoyance, but real tools of deterrence.

Pundits tend to misread the relationship between Iran and Hezbollah by using analogies taken from alliances between states. Such thinking is what leads to assertions that the Iranian leadership would never risk an attack on their country to support the Lebanese movement. It is often forgotten that Iranian and Hezbollah leaders share a sense of common destiny or of a common, imagined community that goes beyond state–non-state interactions. Their ties date back to the '60s and '70s, when many of them were students of Ayatollah Ruhollah Khomeini in Najaf. These ties are not only spiritual, but political in referencing a kinship that is not state-centered.

This means that Hezbollah would benefit, at least symbolically, from the uncertainty associated with Iran’s involvement in a crisis. Hezbollah could demonstrate great confidence during a confrontation if it assumes (rightly or wrongly) that Iran will undoubtedly back it up in the event of escalation. Even if the IDF had evidence that Iran was supporting Hezbollah’s adventurism, it would have to keep the two fronts separate. To that end, its forces might have to refrain from directly attacking Iranian targets, limiting the scope of retaliation to Hezbollah in order to avoid uncontrolled escalation. In a nutshell, nuclear opacity works as a miscalculation multiplier.

Today the regime in Tehran might be keen on crossing the line toward nuclear opacity if its leaders consider this outcome preferable in defending their interests. This is the reason a political solution will not only come from diplomatic talks with Iran, but also from the credibility of the non-proliferation regime itself. In order to dissuade the Iranian leadership from opting for the opaque path, the diplomatic and scientific apparatuses of non-proliferation will be essential. Furthermore, it will also require persuading Israeli decision makers to revise their own calculus. In this particular case, one will not have the luxury of avoiding the original issue of Israel’s security dilemma, which is its need for political recognition and security assurances in exchange for its compliance with the principles of non-proliferation.

Jean-Loup Samaan is a researcher in the Middle East department of the NATO Defense College.