Israeli Prime Minister Benjamin Netanyahu demands a tighter inspection of Iranian nuclear plants, but rejects inspection of settlement financing and construction, which is criticized by Israel's High Court also for its lack of transparency. 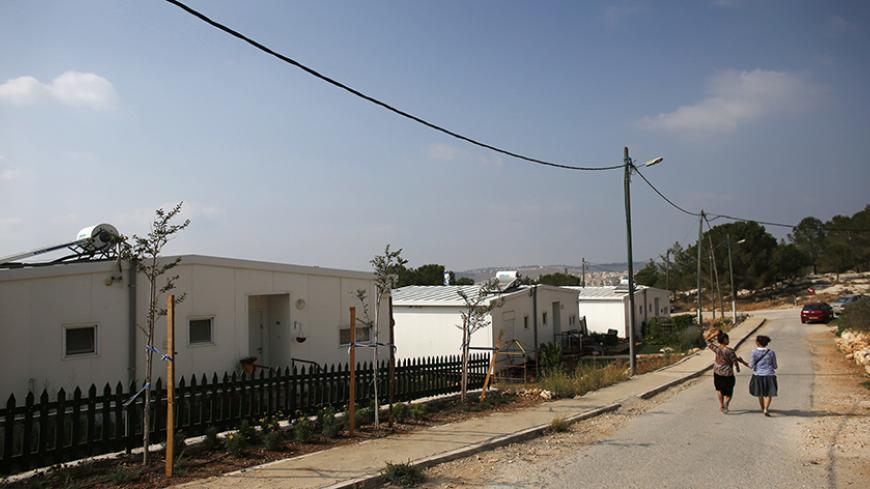 Israeli women walk in a Jewish settlement known as Gevaot, in the Etzion settlement bloc, near Bethlehem, Aug. 31, 2014. - REUTERS/Ronen Zvulun

Even before world powers signed the nuclear deal with Iran, Israeli Prime Minister Benjamin Netanyahu had already determined that its inspection mechanisms were full of holes. At an air force flight school graduation ceremony on June 25, Netanyahu warned that the “many tens of billions of dollars” that will flow into Iran’s coffers once sanctions are lifted will serve, among other things, to expand its conquests in the Middle East. The issue of the supervision over Iran’s nuclear facilities keeps taking center stage in the campaign Netanyahu is waging against the agreement among members of Congress and the American media. “You don’t have inspections within 24 hours — you have 24 days before you can inspect any site that you find suspicious in Iran,” Netanyahu said in an interview with NBC’s Lester Holt. “Can you imagine giving a drug dealer 24 days’ notice before you check the premises? That’s a lot of time to flush a lot of meth down the toilet.”

There’s no doubt that with a country such as Iran, which has gained a deserved reputation for hiding facilities and material that can be used to build nuclear weapons, signing a piece of paper is not enough. Internal operating procedures and external inspection mechanisms are an integral component of any agreement resolving or managing a conflict. Without exception. But it is only fitting that anyone demanding tighter inspections of his neighbor’s backyard take care of his own first. As the Babylonian Talmud says, "Remove the beam from between your eyes" (Arachin 16b), meaning, "Practice what you preach." Every house built in the occupied territories sits on a sufficient amount of dynamite to blow up any chance of ending the conflict with the Palestinians or forging regional peace.

The dynamite of the settlement enterprise, established in 1967, is produced without supervision, in violation of international law and often in contravention of Israeli law. Some quarter of a million settlers have joined the 110,000 Jews who lived in the West Bank at the time the Oslo Accord was signed in September 1993. Not only is the government not supervising the implementation of its commitment under the 2003 Road Map to freeze construction in the settlements and dismantle outposts, last week elected Israeli officials promoted a bill legalizing the lawlessness in its backyard. The government’s Legislative Affairs Committee approved on July 19 a proposed bill anchoring the status of the Settlement Division — a department in the World Zionist Organization that serves as one of the state’s central settlement construction arms. Three days later, the Knesset gave the bill preliminary approval by a vote of 65 to 41.

The ministers and Knesset members who supported the legislation — including the representatives of the farming communities in the Zionist Camp, Knesset members Eitan Broshi and Danny Atar — ignored the objections of the Ministry of Justice professional cadre to the bill and the pre-election commitment of their party leader, Isaac Herzog, to shut down the Settlement Division if elected prime minister.

A legal opinion compiled by Deputy Attorney General Dina Zilber, seconded by her boss, Attorney General Yehuda Weinstein, says that it is counter-procedural to have a nongovernmental operative channel that acts as a state branch and implements government decisions without this channel being fully subjected to proper administrative regulations and framework. The senior legal official said, “There is an inherent concern that this situation could create a kind of backyard for the government to carry out activities not in the framework of the law and could create fertile ground for the development of inherent pathologies."

A document issued last November by the Knesset’s Research and Information Center provides a glimpse into one of the most obvious symptoms of this pathology. It reveals that in recent years, the Settlement Division’s annual budget has run to 500-600 million Israeli shekels ($132-158 million) — more than the budget of some government ministries. In 2013, the division’s original budget — approved as part of the annual state budget — was 82.3 million shekels ($22 million). But the budget it was effectively allocated that year amounted to some 653 million shekels ($172 million). In other words, during the year, various Knesset committees approved additional funding to the tune of 570 million shekels ($150 million), or a 670% increase. If one examines the spending increase according to geographic areas, the largest chunk was allotted to the central region, which includes the settlements of the Jordan Valley, the Binyamin Regional Council, the Etzion bloc and Samaria. The budget for this region ballooned by more than 2,000% in 2013 compared to the original sum approved in the state budget.

“Such an extensive budget illustrates the power and magnitude, the extent of the authority, and the tremendous scope for promoting and setting policy that has been entrusted to the [Settlement] Division,” Zilber wrote. She recommended that the state take back the authority handed to the division following the 1967 Six-Day War. A similar recommendation is gathering dust in a report on settlement outposts, submitted by state attorney Talia Sasson to the government at then-Prime Minister Sharon’s request in March 2005. Sasson found that the Settlement Division had funded, among other things, illegal outposts, including some erected on private Palestinian land.

Former Justice Minister Tzipi Livni of the Zionist Camp headed at the time a ministerial committee charged with implementing the Sasson report. This week she voted against the new law, calling it “a bill that bypasses the authority of the government’s legal adviser,” and claiming that it was designed to funnel money under the table to the settlements.

Minister Ayelet Shaked, who now occupies Livni’s chair at the Ministry of Justice, objected that the government legal adviser and his deputies issue written opinions that contradict the government stance. She reprimanded Zilber for issuing and sending her criticizing opinion to Knesset member Merav Michaeli of the Zionist Camp. This, despite the fact that Zilber's written opinion was in line with statements by the government’s legal adviser eight years ago, by which the Settlement Division should adopt rules similar to the Freedom of Information Law. But, although most of its budget is provided by the public, to this day the Settlement Division is exempt from providing the public with an account of how its funds are spent.

And as if this were not enough, the makeup of the Supreme Court, which to a large extent supervises the rule of law and justice in the territories, is about to change. In the newly named judicial appointments panel, the right wing enjoys a majority, including Knesset member Robert Ilatov, who pledges to supervise the lips of Arab candidates to make sure they mumble the words of the national anthem describing the “yearning of the Jewish soul." Ilatov told Israeli Army radio, "A judge who cannot sing Hatikvah cannot rule on cases in Israel."

Left-wing organizations and human rights activists remain the main source of information about the settlement enterprise. The government wishes to silence that information channel too. Deputy Foreign Minister Tzipi Hotovely is demanding that European states that donate funds to those organizations establish a supervision mechanism for the funding of Israeli nongovernmental organizations. She threatens that if they refuse, the government will advance proposed legislation that has been prepared. Really. Who gave nongovernmental organization Peace Now permission to reveal to the world two weeks ago that the civil administration secretly allocated 300 dunams (74 acres) for the expansion of the settlement of Efrat in the heart of the West Bank? How dare B’tselem document settler harassment of Palestinian farmers. How come Yesh Din activists report on the lack of government enforcement against Israelis living on land that Israel rules by force? Israelis do not submit to supervision.