What Iraq needs to survive 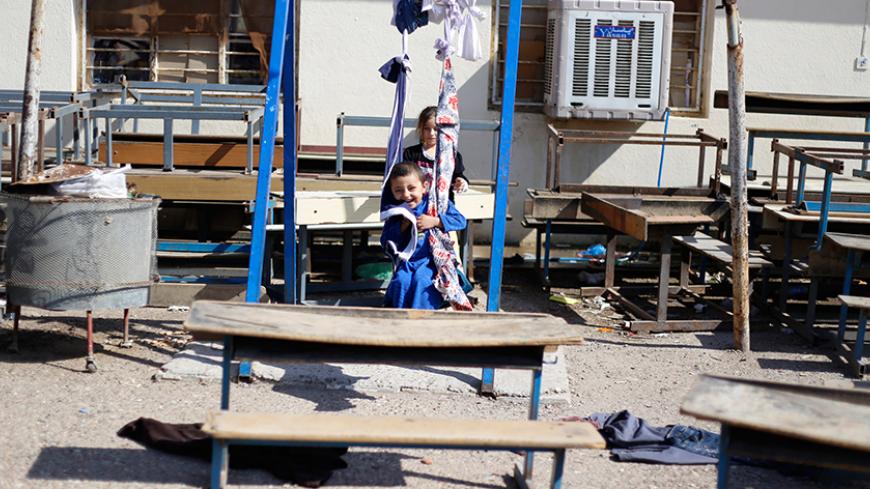 Displaced Iraqi children play at the Bilad al-Arab elementary school, which has been turned into a housing complex for almost 31 families who fled from Islamic State violence in Mosul, in Baghdad, Oct. 22, 2014. - REUTERS/Thaier Al-Sudani

In describing the Iraqi dilemma since 2003, some Iraqis have been attributing the problem to political rather than social factors, whereby all disputes were ascribed to political causes. The prevailing thought among these Iraqis is that Iraq did not suffer from any social, sectarian, religious or ethnic rifts that contributed to this fractious state of affairs.

Other Iraqis believe that the problem Iraq is facing is purely social; that the country does not, in fact, exist, and that its formation under the Sykes-Picot Agreement necessitated the unification of disparate peoples incapable of coexisting.

Today, more than a decade after the Saddam Hussein regime was ousted in 2003, we must admit that a real social problem exists in Iraq — a problem born of historic roots, the perpetuation and exacerbation of which is driven by religious differences and racism.

Yet, the aforementioned does not mean that this social problem is a formative one. Iraq, as other countries in the world, is composed of a variety of religiously or ethnically diverse social groups, such as Arabs, Kurds, Christians and Muslims. Many countries have histories replete with religiously or ethnically motivated bloody civil wars, such as Lebanon, which suffered a civil war that lasted 15 years, killing roughly 150,000 people.

Since 2003, political efforts in Iraq have been focused on feeding and exaggerating social differences, which are reflected in various religious beliefs, national views and even economic differences. Electoral campaigns politically exploited this disparateness, took advantage of sectarianism and played on the prevalence of social rifts and racism to achieve political gains that would have been otherwise unattainable by a political class devoid of culture and intellectual depth.

The political conflict’s contribution in exacerbating social differences was great, catastrophic even, during the post-2003 years, as it has resulted in a bloody sectarian conflict. Yet, it is futile to seek exclusively political solutions to the social crises engendered by that conflict, such as the growing number of widows, orphans and disabled people as well as the prevalence of poverty and the militarization of society.

What is required in the context of the country’s political pursuit of initiatives aimed at reaching national reconciliation, as part of preparedness for the post-Islamic State (IS) era, is for the government, politicians, media personalities, religious figures and concerned organizations to seek long-term action and initiatives meant to address social trouble.

Iraq is in need of serious efforts to organize a campaign in this regard that includes the promotion of social synergy and the culture of coexistence. This campaign would start with educational curricula, affect the media and reach clerics and clan elders as well as cultural and intellectual symposia, culminating in the drafting of supportive laws that strengthen social cohesion and prevent future social fragmentation.

Achieving this is not in the realm of fiction, but is a normal course of action for any nation that has endured experiences similar to those of Iraq. It is noteworthy that France is now a prosperous country living in peace, after enduring a civil war in the 16th century.

The solutions to the setbacks suffered by societies have always been based on characteristically social, economic and political campaigns, supplemented by campaigns of a legal nature. For instance, India witnessed a religious and social conflict for several years, before becoming today a developed country by raising awareness among its people, spreading education and reducing the social divide between classes.

Educational curricula in Iraq, especially at the primary level, suffer from dissonance in the definition of the homeland, and from misinformation related to educating children about the principles of citizenship, while overemphasizing the study of contentious issues, particularly in religious curricula.

This particular point is highly complicated and requires extensive study in order to adopt a unified child-oriented rhetoric that prevents their development based on flawed foundations, and prevents social polarization from within the educational process.

Since such a process results in the most grievous of effects, it thus becomes necessary to address educational flaws and raise the level of educational performance to ensure that it be the first step on the long road toward treating social disintegration.

Furthermore, Iraqi media outlets have played a pivotal role in exacerbating social divisions. In that regard, we must commend the recent efforts of a group of Iraqi journalists to remedy the situation through the establishment of the Iraqi Media House on Jan. 16. This project is supported by the nongovernmental organization International Media Support, which supports global independent media. The Iraqi Media House aims at supporting independent reporters and journalists, and helping them commit to ethical standards.

The house uncovered, through a series of reports published this year, the media’s nefarious contribution in propagating the rhetoric of hate and violence. The report of May 18 — “Anbar Exodus: Iraqi Media Focuses on the Danger of Refugees … while Neglecting their Humanitarian Plight” — detailed the manner by which Iraqi media outlets dealt with the highly sensitive humanitarian issue of the displacement of tens of thousands of Anbar province inhabitants to Baghdad, as IS entered their cities.

The report revealed that the Iraqi media focused on the terrorist threat engendered by those refugees, instead of shedding light on their plight and humanitarian suffering, and ignored the humanitarian works that are carried out to help the displaced.

The tendency of some Iraqi media outlets to focus on the political dispute has had various social effects. In addition, the dissemination of lies, fake documents and news claiming that terrorist elements are among the displaced has led to the establishment of an unhealthy atmosphere when it comes to the circulation of news and rumors.

The situation that prevails in education and media also applies to religion, as clerics bear a historic responsibility in addressing social rifts; in fact, religious rhetoric in recent years seems to have negatively affected the mood of people, and, in many cases, led to social clashes. On Feb. 4, 2014, Saudi religious cleric Abdullah al-Mohaisany had called for the killing of Shiites in Iraq.

There are many moderate clerics who advocate social harmony, most prominent among them religious authority Grand Ayatollah Ali al-Sistani. On Aug. 8, 2014, Sistani called upon the Iraqi citizens to unite in the face of the “big danger” represented by IS.

Such a role is also required from Iraqi tribes, most of which are endowed with religious diversity. These tribes, now more than ever, must put forth initiatives aimed at achieving needed reconciliation in areas that witnessed clashes or were liberated from IS, in the hope that those regional reconciliations form an impetus for reconciliation on a national scale.