Religious figures from Najaf have developed an initiative for dialogue and cooperation with the Sunni provinces liberated from Islamic State. 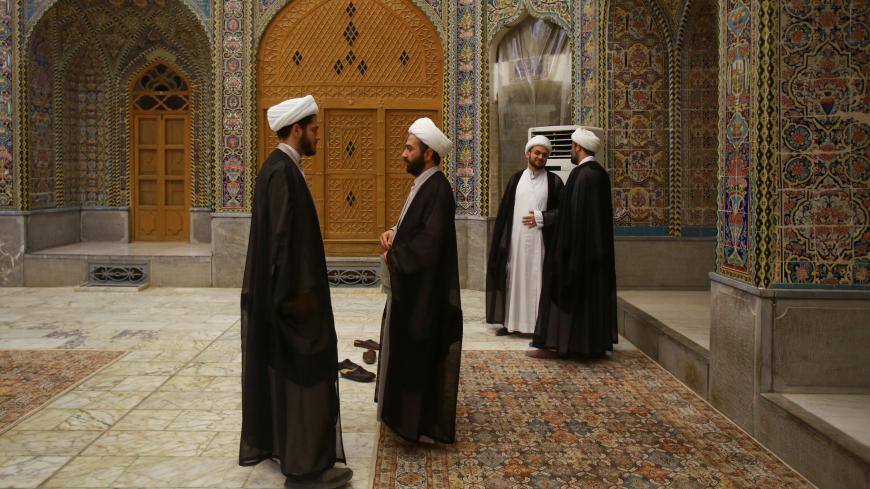 Clerics and other religious figures from Najaf's Hawza Illmiya, a prominent Shiite seminary, have launched the Dialogue for Social Cohesion in Iraq, a community cooperation initiative reaching out to western and northern Sunni governorates recently liberated from the Islamic State (IS). In the first phase of the initiative, a delegation from Najaf visited Anbar University Jan. 10 for meetings to open channels of communication with Sunni scholars and other religious figures, professors, students, intellectuals and civil society members.

Jawad al-Khoei, who oversees the Dar al-Ilm in Najaf and co-founded the initiative, told Al-Monitor in Anbar, “[The goal is to] promote the concept of equal citizenship among all Iraqis and uphold values of shared living and co-existence.”

The delegation to Anbar consisted of figures from various segments of Najaf society, including religious authorities, professors from the University of Kufa and youth leaders from civil society organizations (CSOs).

“The initiative will include other visits, to the governorates of Saladin, north of Baghdad, and Mosul, in northern Iraq,” Khoei said. “There are also several local NGOs [nongovernmental organizations] in Najaf working in cooperation with international NGOs, including the Finnish Crisis Management Initiative, which is also involved in this project.”

Iraq’s main Sunni governorates — Anbar, Saladin and Mosul — suffered social fragmentation, along with the rest of Iraq, after IS seized and held their territory for three years. That period had been preceded by another episode of social upheaval with the sectarian conflict ignited between Sunnis and Shiites following the US-led invasion in 2003 and subsequent occupation. All this has created deep mistrust between Sunnis in those governorates and Iraqis in Shiite- and Kurdish-majority governorates.

This highlights the necessity of the work by Shiite religious institutions and personalities in Najaf to open communication channels and boost cooperation aimed at establishing social harmony between the Sunni governorates and the rest of Iraq.

During the delegation visit to Anbar, Khoei addressed a crowd of intellectuals and professors at Anbar University. It is hoped that such visits — by harnessing the broad influence of Iraqi religious figures, professors, intellectuals and students — will eventually bring together Iraqis at the grassroots from all walks of life and from across the sectarian spectrum.

“We are all in the same boat, whether in the northern, southern, central or western governorates,” Khoei said. “All of them suffer from one problem: corruption, poor services, and unequal distribution of wealth.” He stressed that the only solution to these problems is to work toward the establishment of a “state of citizenship.” Khoei also pointedly noted that the Najaf initiative is a sociological and cultural project devoid of any political agenda.

The initiative is, in fact, a project of the religious authority in Najaf, Grand Ayatollah Ali al-Sistani. According to Khoei, the initiative is based on the need for “fair government, regardless of religion or sect.” “[It] does not judge a ruler by his religion, but by his justice,” he said.

In speeches and publicly stated positions, Sistani, Iraq's supreme Shiite cleric, has advocated for relations among Iraqi communities on the basis of the values of citizenship, not religious or ethnic affiliation. He has stressed on more than one occasion that Sunnis and other sects and ethnicities share equal footing with Shiites, being entitled to the same rights and responsibilities of citizenship.

To cite one example of Sistani's thinking, after some Iraqi clerics issued fatwas in December prohibiting Muslims' from participating in Christmas and New Year’s festivities, Sistani ruled to the contrary. “It is permissible to extend greetings to non-Muslims, including Jews and Christians and others, during their festivities, such as Christmas, Easter and New Year,” he wrote.

Balaghi Academy, a Hawza institution, is taking part in the Najaf initiative, represented by its director, Sayyad Zaid Bahr al-Ulum. The academy's primary focus is on interfaith and intercultural engagement. It has hosted several Christians and other figures at the Hawza and has cooperated with non-Islamic institutions, such as the Christian Community​ of Sant'Egidio, to further religious dialogue.

The Najaf initiative emerged from the growth of a large community within the Hawza calling for rejecting extremist religious stances and instead advocating religious openness in human relations and a civil-oriented state with citizenship equality. They oppose the establishment of a religious state, for which some political parties have been calling.

Several CSOs have joined the Hawza in pursuing joint civil action. The Wave Team, consisting of young people from CSOs working to promote civic values in Najaf are among the main participants in the activities sponsored by the Hawza clerics. For instance, the team took part in the Najaf Initiative for Dialogue and Solidarity with Sunni Governorates, part of the social cohesion project. The UNESCO Chair for Inter-religious Dialogue Studies in the Islamic World, a department at the University of Kufa, has also participated in Hawza-sponsored activities aimed at promoting national reconciliation among Iraqis.

Initiative members are currently organizing visits to the Saladin and Mosul governorates in mid-2019, followed by Najaf playing host to Sunni personalities and leaders from those governorates.

The Najaf Hawza's civil initiative and other activities suggest that the Shiite religious institution has decided to dedicate its authority to encouraging deep-rooted and broad-based social cohesion, taking on a major role in building national harmony in areas affected by extremism and sectarianism.