Power outages have become a commonplace happening in Iraq, where people now depend on more than one source to substitute for the government’s poor services. 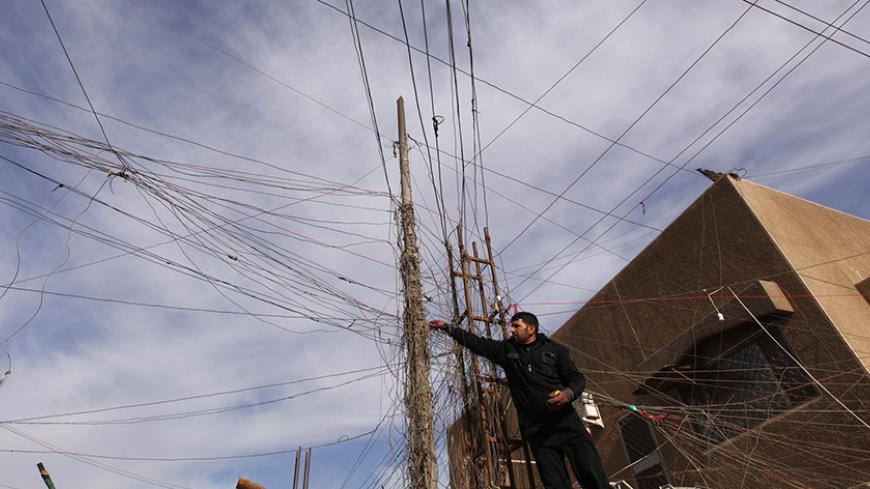 An electrician uses an Avometer to check wires connected to his local generator on a street in Baghdad, Dec. 13, 2011. - REUTERS/Saad Shalash

One of the most notable plans was the Ministry of Electricity’s announcement in April 2013 that 2015 would witness an end to the electricity crisis and that the next year’s summer is set to become better than the ones that preceded it in terms of electricity. However, such promises have come to naught.

Ali Hatem, a grocer from the Babylon province, 100 kilometers (62 miles) south of Baghdad, relies on three sources of electricity to supply his house, after the Ministry of Electricity failed to provide the citizens with sufficient electricity. He told Al-Monitor, "The first source is [his] own gasoline-powered generator, which produces 10 amps for six hours a day. The second is the neighborhood’s generator supplying 20 amps for nearly 10 hours a day. This is while the electricity during the rest of the day is supplied by the government.”

This is an example of how much the Iraqis rely on the indispensable generators at home and in the workplace.

Hatem told Al-Monitor that he paid $300 to purchase a Chinese-made generator that produces 10 amps of electricity. This is while he pays $50 as a monthly subscription to receive electricity from the neighborhood’s generator.

He said, “[When I’m out of gasoline] I have to get it in a barrel from the station for nearly $70. It will be enough just for a month and a half.”

He added, “All of these efforts are made to have 10 amps of electricity and to be able to run a refrigerator, an air conditioner and a TV.”

The electricity crisis in Iraq dates back prior to the US-led invasion of Iraq in 2003, when the country used to produce nearly 4,300 MW daily, which did not meet its electricity needs. According to a 2014 statement by Iraqi Minister of Electricity Qasim al-Fahdawi, Iraq needs 30,000 MW daily.

Qassem al-Sharifi, an electrician, told Al-Monitor, “Generators were not widely spread before 2003 because of the economic blockade in the 1990s, which prevented the import of electrical appliances from outside Iraq. Yet following 2003, huge numbers of generators entered Iraq due to the economic opening-up in order to compensate for the huge electricity shortages.”

Haider Hussein, a generator owner in al-Shawi neighborhood in Babylon, told Al-Monitor, “The officials’ successive promises and statements to complete electricity projects made [me] believe that generators would not be used at all within two years. Yet the opposite is true, as the supply of electricity to cities is less than the required level.”

This failure in the provision of electricity has caused massive demonstrations in several cities, demanding the reasons behind electricity shortages be addressed, Haider Zoer, TV anchor with Al-Iraqia Satellite channel, told Al-Monitor.

He said, “The generator has become a symbol of corruption in Iraq’s electricity sector.”

The lack of electricity in Iraq has given the neighborhood’s generator owner an important social role, as the people need the paid services he provides. Media figure Ali Alobodi told Al-Monitor that the reason behind this is that “the generator owner is the one who decides whether to provide electricity and imposes the prices for the service as per his own conditions.”

Fahdawi revealed Nov. 30, 2014, that there is a plan to end the electricity crisis in Iraq by 2020. Yet Iraqis have not rejoiced in this, given the multitude of unfulfilled promises in this regard. Former Deputy Prime Minister for Energy Hussain al-Shahristani had said July 12, 2013, that “Iraq will be exporting electricity to neighboring countries. His statement was later ridiculed in the media and by citizens.

Adel Mahmoud, a power engineer, told Al-Monitor that the solution to the electricity crisis “consists in privatizing the electricity sector in order to build new plants, through calling on the expertise of foreign companies who [should be] encouraged to invest in this sector.”