Frustration continues to mount in Iraq with the government unable to deliver sufficient electricity despite eight years of promises by officials. 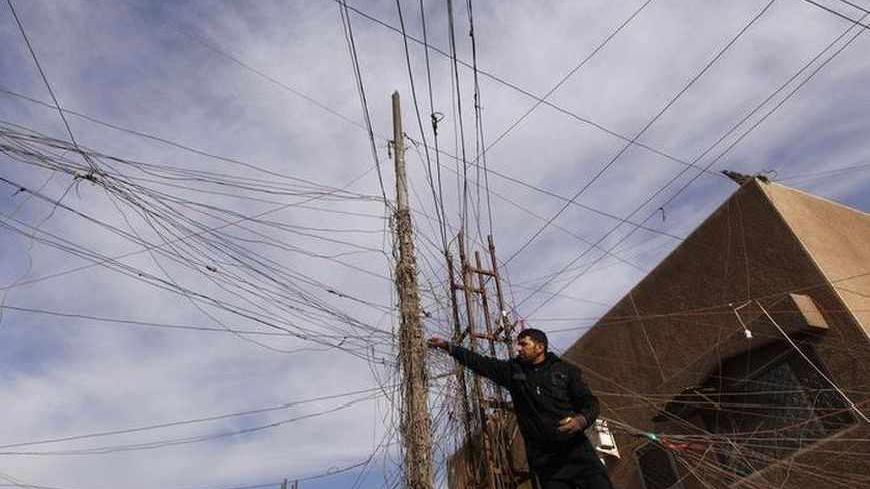 Iraqi Prime Minister Nouri al-Maliki has admitted to a “defect and stupidity” in the contracts signed by Iraqi officials with international companies to improve his country's power distribution.

On July 23, in a Baghdad meeting with economic affairs experts broadcast by Iraqi satellite channels, Maliki said that he had “formed a committee to investigate the failure of Iraqi officials specialized in electricity.” He charged, “They were giving me wrong numbers. They said that Iraqis are getting 30,000 MW [megawatts] and that this amount exceeds their needs and can be exported abroad.”

On June 20, prominent Shiite leader and Deputy Prime Minister for Energy Affairs Hussein al-Shahristani had asserted, “By the end of this year, power generation in Iraq will be sufficient to meet the citizens’ needs, as pledged by the Ministry of Electricity.” He also claimed, “Electricity distribution hours in Baghdad range from 15 to 16 hours a day.”

Despite promises by officials that residents would receive 18 hours of power a day in 2013, the current reality indicates that they are receiving much less. Indeed, based on the firsthand experience of this Al-Monitor correspondent, Baghdad residents on average enjoy six hours of electricity, at most, while some areas of the city remain completely without electricity.

Iraqis are frustrated and exhausted by the country's power supply problems. Officials have for eight years alleged progress in the electricity sector. Today, Iraqis have no confidence in the validity of such statements and generally ridicule them.

During the July 23 meeting, Maliki also asserted, “Reports about the end of the electricity crisis in Iraq and power exportation later this year are incorrect. I have MPs who do not assume their responsibilities.” He continued, “I personally signed a contract with GE to build power stations that supply the Iraqi system with 7,000 MW, and I signed a contract with Siemens to build power stations capable of generating 3,300 MW, an amount capable of meeting Iraq’s needs. But it turned out that there are defects and stupidity on the part of the specialist who agreed on those contracts. The contracted stations operate on gas, while Iraq has no gas.”

Musab al-Mudares, spokesman for the Ministry of Electricity, told Al-Monitor, “The ministry’s engineers are working hard to provide energy.” He refused, however, to comment on the prime minister's remarks regarding flawed contracts for the construction of power plants.

Meanwhile, Mudares said that the Oil and Energy Committee had concluded that the electricity crisis will not be resolved before 2015, and the 2013 production level will only satisfy 30% of Iraqis' actual needs.

Furat al-Shara, a Shiite member of the parliamentary Oil and Energy Committee, told Al-Monitor, “Iraq’s actual need for electric power amounts to 17,000 MW.” He added, “The total amount produced by Iraqi power stations does not exceed 7,200 MW, at best.” Shara also revealed that “not all the quantities that go out of the central generators reach Iraqi citizens, due to a great deal of leakage that results from poorly wired energy carriers.” In total, he said, only 5,500 MW of the electricity generated reaches Iraqi homes.

This decrease in distribution comes amid a harsh, hot summer. Near the entrance to the University of Technology in central Baghdad, the most prominent engineering institute in the country, a large thermometer records temperatures. It has been registering daily peaks of 51 degrees Celsius [123 Fahrenheit]. In cars equipped with air conditioners, the temperature inside does not go below 24 degrees '[75 degrees Fahrenheit].

University professor Shorook Amer told Al-Monitor, “The large thermometer installed by the university is relatively accurate.” On July 23, the Meteorological Department in Baghdad announced that the high in Baghdad that day had been 43 degrees Celsius [109 degrees Fahrenheit]. Due to the high temperatures, the government decided to allow employees to take leave every Thursday during July.

Despite minor differences in temperature readings, they are overall generally quite high and are causing drought and hardship. This summer, like those of years past, is fueling anger toward government officials because of the accompanying sharp decline in the power supply.

During this last year of the current government, which ends in summer 2014, it appears that the Maliki administration will again prove itself unable to end the energy crisis plaguing Iraq.

He continued, "Until now, the total amount spent is nearly $50 million."