Lights out on Maliki's electricity promises

Ali al-Fayyad, deputy head of the Iraqi parliament's Energy Committee, said he's hoping the private sector steps in to ease the electricity crisis that the people have suffered from for decades, especially in the scorching summer months. 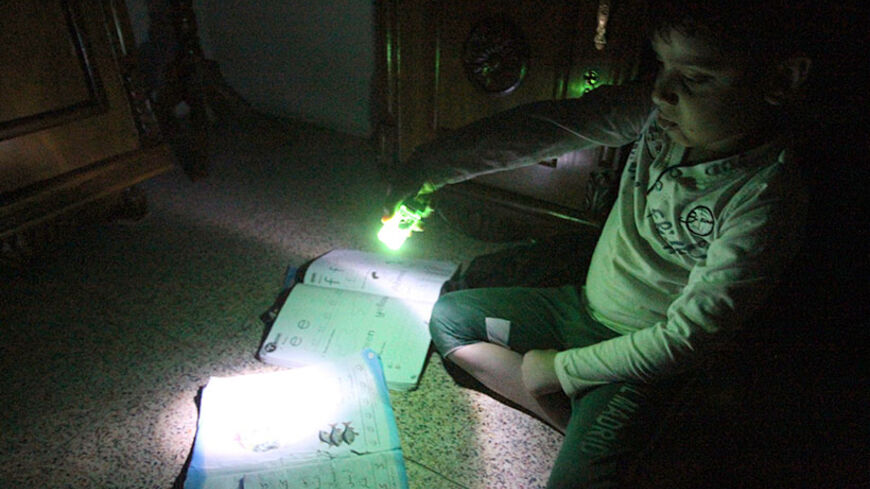 An Iraqi boy during a power outage in Baghdad, March 19, 2014. - ALI AL-SAADI/AFP/Getty Images

A week ago, Mohammed Karim bought a small inflatable pool for his three children to ease the scorching heat during power outages. He has a two-year-old toddler who cannot bear the high temperatures at night, so Mohammed stays up late next to him until the power comes back so he can place him under the air conditioner.

Since the 1990s, Iraq has suffered from a significant shortage in power, after the US military targeted power stations during Iraq’s invasion of Kuwait in 1991. And the electricity problem worsened after the occupation of Baghdad in April 2003.

What makes matters worse are the charges of corruption against former Ministers of Electricity Aiham Alsammarae and Karim Wahid, who headed the ministry during different periods following 2003. The two ministers concluded many deals that were supposedly aimed at increasing the production of electricity, but the government discovered that most of the deals were either fake or violated terms and conditions.

In the streets of Baghdad, people set up makeshift showers for passers-by to wash up and ease the heat. This has led to the spread of waterborne diseases such as typhoid.

On July 22, 2013, Prime Minister Nouri al-Maliki said that Deputy Prime Minister for Energy Hussain al-Shahristani misled him about electricity production and Iraq’s ability to export energy to neighboring countries in the near future. Maliki admitted during a televised interview that the Iraqi Ministry of Electricity is a “fiasco.”

In December 2013, Maliki promised to provide power “around the clock,” but this promise has gone unheeded.

Many people in Baghdad have linked the increased availability of electricity to the April 30 parliamentary elections, stressing that it is an electoral ploy to re-elect Maliki and his bloc, in addition to current Minister of Electricity Abdul Karim Aftan.

Karim told Al-Monitor, “Politicians are taking advantage of everything to stay in power. A month before the elections, we had electricity 24/7, however, after the elections, the situation has changed.”

Ali al-Fayyad, deputy head of the Iraqi parliament's Energy Committee, said with a tone of despair, “The issue of electricity has become a dilemma.”

Fayyad, a member of parliament from Maliki's State of Law Coalition, told Al-Monitor that the committee has faced difficulties in passing the law to privatize a part of the electricity sector. However, “the law was [finally] passed parliament,” he said. “With a little help from the private sector, national companies will be more able to provide electric power.”

According to Fayyad, the Ministry of Electricity, which did not respond to Al-Monitor’s calls, “has promised to provide power 24 hours a day during the month of June.”

“Any intervention on the part of the private sector will be of great help to put an end to the crisis,” he said.