Egypt clamps down on religious ritual

The Egyptian Ministry of Awqaf has imposed a series of strict conditions on religious retreats held in mosques during Ramadan. 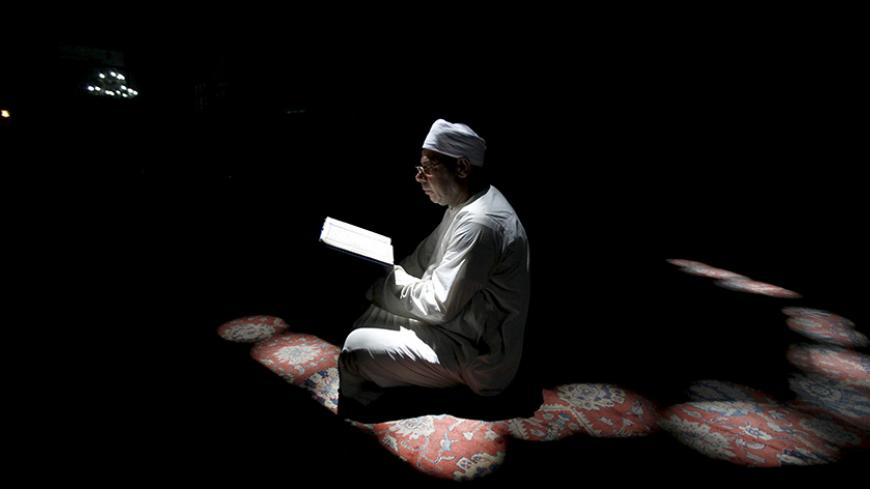 A Muslim man reads the Quran during the holy month of Ramadan inside Al-Refaie mosque in the old Islamic area of Cairo, Egypt, June 28, 2015. - REUTERS/Mohamed Abd El Ghany

CAIRO — A popular religious ritual is receiving extra scrutiny from officials in Egypt this Ramadan.

The practice of itikaf, a period of retreat in a mosque where Muslims can distance themselves from worldly affairs and concentrate on religious activities, is most commonly observed during the last 10 days of Ramadan, in keeping with the example set by the Prophet Muhammad.

While many Muslims have come to anticipate the holy month as an opportunity to perform this duty, this year, some of those desiring to participate in these retreats might not get their wish. For the first time ever in Egypt, many new conditions on such activities have been imposed by the Egyptian Ministry of Awqaf in response to the current security and political situation in the country.

On May 29, the Ministry of Awqaf issued a statement on its official website warning that not following these conditions would render a itikaf assembly an illegal meeting, and subject to legal action:

On June 17, the Ministry of Awqaf announced the names of 3,781 mosques authorized to hold these assemblies during the month of Ramadan throughout 27 governorates — including 296 in Cairo governorate, the inhabitants of which, according to 2014 information by the Central Agency for Public Mobilization and Statistics, total about 9.2 million people.

Tarek el-Sehri, chairman of the Salafist Nour Party’s Supreme Council and deputy head of its dissolved Shura Council, told Al-Monitor, “Organization is welcome, but complicating matters is not acceptable. The Ministry of Awqaf has now assumed a security role at the expense of one revolving around preaching activities. The ministry has thus adopted these arbitrary measures that make it difficult for Muslims to perform their religious duties, in a manner that contradicts the role to be played by the ministry — which must facilitate worship activities instead of putting up hurdles during this month of fasting.

"The condition stipulating that assembly participants be inhabitants of the neighborhood is impractical. The addresses on the national ID cards of many citizens are different from their actual places of residence, particularly for those who came from outlying governorates to work in Cairo, where groups of young men rent a single apartment close to their work and refrain from changing their ID card addresses to make it easier for their families to register their children in convenient schools, for example. In addition, what if a neighborhood resident, known to area inhabitants, loses their ID card? Would they have to wait until Ramadan of next year to receive a replacement national ID card?”

Sehri added that the Ministry of Awqaf would have done better to organize campaigns promoting this duty and introducing Muslims to the benefits of itikaf. Its role should revolve around encouraging Muslims to perform this act, instead of imposing arbitrary conditions.

Sehri further indicated that enforcing these conditions would prove to be difficult due to the Ministry of Awqaf’s lack of resources and the existence of large numbers of mosques that do not fall under its purview and are built and maintained by local residents.

Sehri also warned that such conditions might backfire, for while the Ministry of Awqaf is adopting these measures to combat extremism, they might convey the wrong message to citizens — especially young people — in a country that is widely devout. Many could feel that restrictions are being imposed on observance of religious rituals.

Furthermore, the secretary-general of the Salafist Nour Party in Giza governorate and a member of the Salafist Dawah Shura Council, Ahmad Shukri, told Al-Monitor, “Due to the sensitive stage through which the country is passing, the Salafist Dawah is keen on avoiding any conflict with the Ministry of Awqaf. Therefore, despite our objection to the conditions imposed by the ministry on itikaf assemblies, we shall abide by those conditions and endeavor to satisfy them all in our mosques.”

The undersecretary of the Ministry of Awqaf for Mosque Affairs, Sheikh Fuad Abdul Azim, told Al-Monitor, “The controls established by the ministry to organize itikaf assemblies aim to protect attendees and the country, for infiltrators may join participants and steal their personal belongings. In addition, there are political parties and movements that exploit mosques for their own benefit. As a result, the ministry strives to prevent religious rituals from being used for political and partisan motives. That is the reason why the ministry stipulated the use of the national ID card number to determine the identity of itikaf assembly attendees and the extent of the threat posed by them to security.”

The chairman of the Egyptian Imams and Preachers Syndicate, Mohammed Bastousy, endorsed the Ministry of Awqaf’s decisions, telling Al-Monitor, “Nationwide, 3,781 mosques is more than enough, because the numbers of people wishing to attend itikaf assemblies is low. The ministry has chosen mosques in proportion to the number of people who have submitted their information and are desirous to attend itikaf assemblies.”