Egypt is seeking to repatriate $700 million that Switzerland has frozen in accounts that belong to Hosni Mubarak and his family. 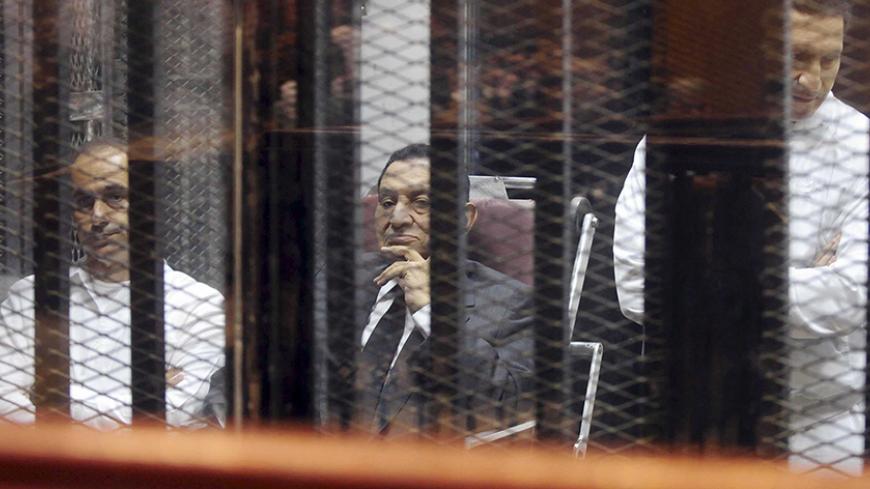 Egypt's ousted President Hosni Mubarak sits next to his sons Gamal (L) and Alaa (R) inside a dock at the police academy on the outskirts of Cairo, May 21, 2014. - REUTERS

CAIRO — In July 2012, Swiss public prosecutor Michael Christophe Lauber froze accounts with 700 million Swiss francs ($761 million) in Swiss banks. These funds are in the name of ousted President Hosni Mubarak and his two sons, Alaa and Gamal, and 31 of his aides, including former Prime Minister Ahmed Nazif and former Interior Minister Habib al-Adli. Lauber's action was based on documents received from the Egyptian government after the January 25 Revolution, stating the funds had been illegally smuggled out of the country.

The Egyptian Ministry of Justice received an official letter June 17 from the Swiss public prosecutor’s office indicating that the investigations related to the accusation of Mubarak and his regime of joining and supporting a criminal organization had been halted following the acquittal of Mubarak and his aides by the Egyptian judiciary, but that the investigation of money laundering against Mubarak and 31 of his men was still underway and that the funds would remain frozen.

Following the Swiss decision, President Abdel Fattah al-Sisi issued a new law (No. 28/2015) June 25 on the establishment and organization of a national committee for reclaiming funds and assets abroad.

The establishment of the committee will be presided over by the Egyptian public prosecutor. The committee will include the head of the Egyptian Illicit Gains Authority as its vice president and members representing various authorities, including the Intelligence Service, Interpol, the Public Funds Investigation Department and the Administrative Control Authority.

The committee will be empowered to receive reconciliation requests submitted by people whose names are on asset-freeze lists abroad, or submitted by their attorneys. This may encourage people to repay the government in exchange for leniency on charges of illegally taking public money outside the country.

The move comes after the creation of seven official and popular committees for the purpose of recovering funds smuggled abroad since the January 25 Revolution; so far they have failed to achieve the desired goal. An estimated 500 million Egyptian pounds ($65 million) has been spent by those committees on travel fees and accommodation allowances for committee members, in addition to the contracts concluded with international law firms for the reclaiming of funds.

Former Justice Minister Ahmed Makki told Al-Monitor, “In 2012 and 2013, Egypt’s position regarding recovery of these assets was weak, as no final Egyptian judicial rulings were rendered against Mubarak and his aides. The judicial systems of the countries implementing the freezing of the funds — such as Switzerland — must peruse these rulings; then their judicial departments may issue judgments repatriating the smuggled funds to Egypt.”

Makki said the governments of the countries where these funds are located benefit from the freezing procedure, since they no longer pay interest to depositors. “The longer the freeze, the bigger the earnings of these countries, and therefore, there is no sincere intention to repatriate these funds,” he said.

He added, “When I was minister of justice, I discussed with US Secretary of State John Kerry the repatriation of funds smuggled to the US. This was back in March 2013. In turn, Kerry contacted US Ambassador to Cairo Anne Patterson. The latter’s statement personally shocked me. She indicated that according to available information, Mubarak's funds in the US are estimated at only $3 million. Patterson requested that Egypt determine the value of the funds and the banks where they are deposited and to prove that they are illegal funds, despite the fact that the US has accurate financial tracking systems. In this respect, the US was asked to assume its role in combating corruption in the developing world and to repatriate these funds without waiting for the Egyptian judicial decisions to prove that its war on corruption is serious.”

Yahya Jalal, assistant to the minister of justice and former head of the Illicit Gains Authority, told Al-Monitor, “The Egyptian public prosecutor issued in May 2015 an explanatory memorandum on the obstacles on the ground in terms of reclaiming of funds smuggled abroad.”

According to Jalal, these hurdles included international cooperation obstacles, represented by some countries’ suspension of judicial cooperation with Egypt, and the stay of execution of international letters rogatory sent by Egypt, resulting from claims that the Egyptian judiciary lacks independence and stability. Examples include the judgment rendered in December 2012 by the Supreme Court in Switzerland ordering the stay of execution of letters rogatory sent by Egypt, the different legal systems between Egypt and those countries, and the rapid political changes over a short period that led some countries to question the existence of a genuine Egyptian political will to recover those funds.

Jalal said that at the national level, the confusion between state organs leads to a slow pace of proceedings related to the recovery of funds, as is the case when numerous national authorities and parties simultaneously send the same international letter rogatory to the public prosecutor of the concerned country.

Ahmed Refaat, former president and professor of international law at Beni Suef University, told Al-Monitor that he is very optimistic about the new committee formed by Sisi because this committee will, for the first time, allow reconciliation with the accused in cases of seizure of public funds. He explained, “The accused will make restitution of the looted funds in exchange for dropping charges against them. The Egyptian law allows reconciliation in several matters, including currency, tax and customs-related issues. Moreover, the Islamic law allows reconciliation in murder cases by paying blood money. The possibility of reconciliation will save time and huge amounts of money paid for international law firms and travel allowances for the members of the relevant committees.”

Refaat indicated that there is a great difficulty facing the recovery of those Egyptian funds through traditional legal means, since the economies of some countries, such as Switzerland, rely on banks and deposits. He said, “If those countries restituted these funds, the depositors' confidence in these banks relying on foreign remittances would be shaken, which would lead to reluctance to deposit funds in these banks and cause the collapse of these countries’ banking systems.”

Ambassador Badr Abdel Ati, spokesman for the Egyptian Foreign Ministry, told Al-Monitor that the Foreign Ministry’s role is to deliver international letters rogatory to the countries where the funds to be recovered are located. All other matters are purely judicial and entrusted to judicial institutions and supervisory authorities.