The enigmatic UAE security forces have perfected the art of silencing critics and created an environment in which nearly everyone is afraid to say anything remotely resembling criticism of the government. 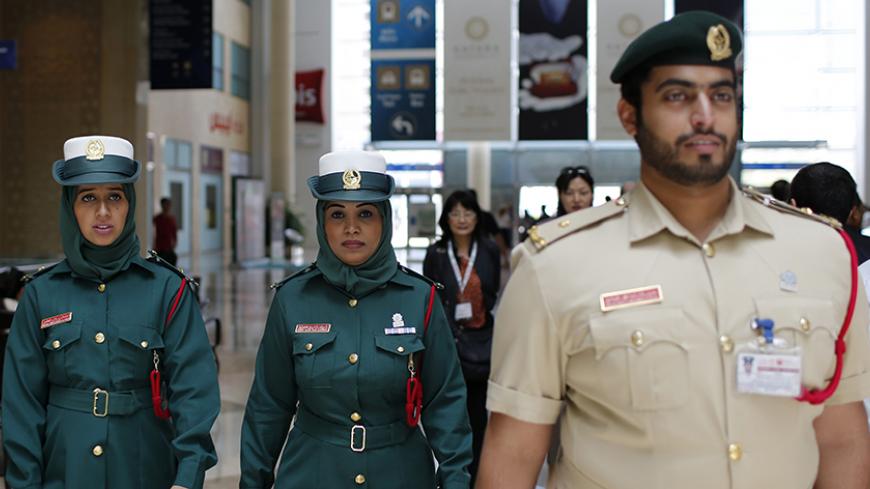 Through a series of overt and covert actions, the security forces of the United Arab Emirates have created an environment in which internal criticism is practically nonexistent and external critics are targeted.

The result is a shiny veneer of liberalism — propped up by partnerships with Western organizations such as the Louvre, Guggenheim and New York University — while in reality the country operates like a modern police state.

For the average Emirati, the security forces are a well-known, if enigmatic, institution. One Emirati said, “If you say the wrong thing here, then they’ll come and make you disappear.”

The all-powerful, opaque security agency operates outside of the judicial system, often detaining its own citizens and holding them without charge or notice to families for months at a time. One Emirati disappeared after conducting an interview with CNN. More than a year later a court set him free because of his poor health, yet Obaid Yousef Al Zaabi is still being held by the security forces somewhere in the country, activist Ahmed Mansour told Al-Monitor.

Another Emirati, speaking anonymously to Al-Monitor, said that he remembered a case of a local lawyer who complained vocally about Indian labor abuses. The lawyer “vanished without a trace and [his] family hadn't heard from him for two months,” he said. “Needless to say, he showed up a few months later and changed his tune.”

Still, the Emirati said that the security forces are widely respected because of their role in maintaining peace and stability in the UAE. He added, “But [the people] are also mindful of the boundaries one should not cross.”

Perhaps tellingly, the Emirati speaking to Al-Monitor had not heard of one of the security forces’ most recent abuses involving the abduction of three Emirati sisters.

“Of course, there is a factor of ignorance involved,” he said.

The local media rarely report on actions taken by the security forces, leaving anonymous Twitter accounts and smartphone applications like WhatsApp as the only methods to convey this type of information. If Emiratis aren’t checking these sources, then they’re largely oblivious to the security forces’ actions.

The incident with the three sisters concluded last month. Earlier this year, the three Emirati women vanished after being called into a police station for questioning. The sisters had tweeted about the unfair sedition conviction of their brother. According to reports, the sisters had tweeted, “I miss my brother.” One of them, according to Mansour, a local rights activist, had insisted on social media that her brother wasn’t guilty after she reviewed the court transcripts. Apparently this scant criticism was enough to warrant abduction by the security services.

After three months with virtually no word from authorities, the three women were released to their home. No charges had been filed and no appearances were made before a judge. Arbitrary detentions violate several international treaties and covenants including Article 14 of the Arab League Charter of Human Rights. The local press never mentioned the case, although a few Emiratis did speak up publicly on social media about their disappearance. Amnesty International created a campaign to highlight their plight.

Often the security forces will detain dissenting Emirati citizens for several months before finally presenting them to a court on charges of “insulting the state” or “spreading false news.”

Other recent events illustrate how the UAE security forces have perfected the art of silencing critics.

Former Guardian editor, Middle East author and blogger Brian Whitaker has written extensively on the UAE, including a series of reports about one of its cheerleaders, a sketchy human rights group called the Global Network for Rights and Development (GNRD). His exhaustive takedown of the GNRD included pointing out that its “high commissioner” was convicted on criminal charges of misconduct in Belgium and its founder once ran a fake university. Whitaker pointed out that the GNRD, supported by murky financial sources, appears more than eager to praise the UAE and its human rights record. Other human rights organizations, including Amnesty International, haven’t been so kind.

After publishing his series of damaging articles earlier this year, Whitaker said hackers tried repeatedly to break into his social media accounts, fake online profiles were created and hundreds of fake Twitter accounts posted false allegations about him. An anonymous video on YouTube accused him of trying to pay a man for sex. He told Al-Monitor that the attacks stopped after about six weeks and haven’t restarted, despite (or perhaps because of) his continued critical reporting on the UAE. Although Whitaker never makes any direct accusations, the reasonable conclusion is that this orchestrated effort to discredit him comes from the security services of the UAE.

The New York Times has also documented nefarious action from the mysterious security services. Earlier this year, the newspaper issued a stinging piece of journalism exposing horrible labor conditions at the New York University (NYU) Abu Dhabi campus. The local UAE printer refused to publish that issue because they deemed it “too sensitive for local audiences.”

While reporting on the working conditions, the New York Times reporter and her co-author found themselves probed by a private investigator. The investigator, who refused to say for whom she worked, also tried to dig up negative information on Andrew Ross, an NYU professor who studied labor conditions at NYU Abu Dhabi. The reporter’s co-author was thrown out of the country and Ross was later denied entry to do his research interviewing workers. The reason given at the airport: “security concerns.”

In a more overt action against critical speakers, the State Supreme Court recently convicted five Qataris of “insulting the state” by spreading supposedly false “news, data, information and pictures on Twitter and Instagram.” The two Qataris held in the country were released seven days later by presidential decree, a move to patch up relations between the two countries. Laws that ban insults and false news are internationally condemned as an unjustifiable abridgment of free speech.

Another method to block unwanted criticism is to simply not allow people who ask uncomfortable questions into the country. In addition to the New York Times’ co-author and NYU professor, the country has also blocked an Amnesty International researcher as well as an academic expert who was critical of Bahrain. In 2012, the country threw out Abu Dhabi Gallup and two civil society nongovernmental organizations.

The result of these anonymous cyberattacks, mysterious investigations, secret abductions and banned critics? An environment in which everyone is scared to say anything remotely resembling a criticism of the government. If you live in the UAE, you may enjoy the comforts of a pampered Western lifestyle but not the freedom of speech associated with the West and many other parts of the world. In a bid to create stability above all else, the security forces control any dissenting speech inside their borders. And they seem to answer to no one, save perhaps the unelected sheikh who rules the country.