The prison sentences of two Emirati men are the latest chapter in the UAE's crackdown on social media. 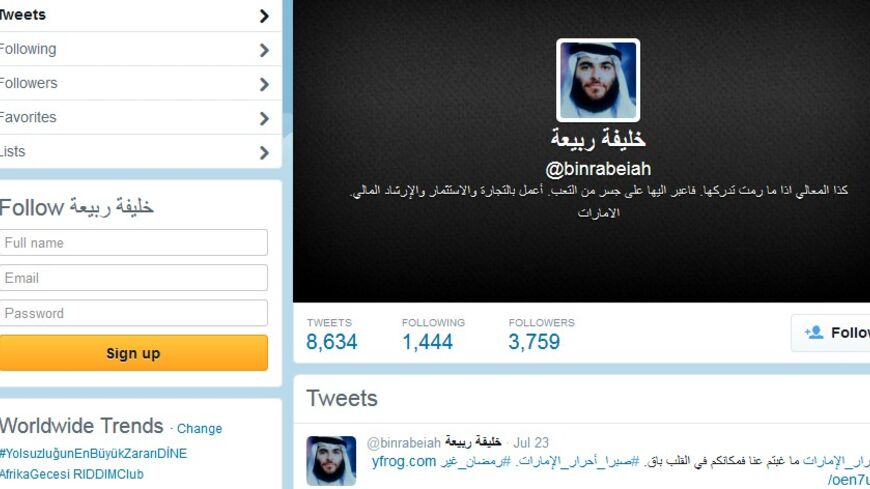 Khalifa Rabeiah, a 35-year-old businessman, was sentenced to five years in prison and $135,000 in fines for statements he made on Twitter. - @binrabeiah

The UAE courts sentenced two Emirati men to five years in prison and $135,000 in fines for statements they made on Twitter criticizing the state security services, according to observers.

The convictions are the latest move in a widespread crackdown on dissenting speech in the United Arab Emirates. Last year, 69 Emiratis were convicted of attempting to overthrow the government, but critics said most of the defendants were merely guilty of speaking out against the government and calling for reform. Other Emiratis were charged with tweeting “false news” about the sedition trial or otherwise violating a cybercrime law that makes it a crime to disparage the country via Twitter.

The two men — Khalifa Rabeiah, a 35-year-old businessman from Fujairah, and Othman al-Shehhi, a 40-year-old phone company engineer from Ras al-Khaimah — were convicted on March 10. The Emirates Center for Human Rights (ECHR) said the trial lacked due process and noted that allegations of torture while in custody had not been investigated.

The local press has not covered their arrest or trial.

According to the ECHR, both men were arrested on July 24, 2013, and spent six months detained at an unknown location. The security forces allegedly provided no information about their arrest or their location to family members. The government held the Emiratis convicted of sedition last year for months before officially acknowledging their detention and filing formal charges.

The government-aligned Abu Dhabi news site 24.ae aired a report that analyzed Rabeiah’s Twitter account, accusing him of sedition for using Twitter hashtags that called for the release of Emiratis convicted of sedition.

In one of his tweets, Rabeiah said, “From this day forward the call for reform and its advocates will spread among the people. Thank you free people of the Emirates.”

The two men were convicted of violating articles 24 and 41 of the cybercrime law, according to ECHR. Article 24 makes it a crime to use electronic means (such as Twitter, Facebook or YouTube) to “damage the national unity or social peace or prejudice the public order and public morals.” Article 41 gives security forces the power to seize electronics used in committing cybercrime violations.

The moves against the Muslim Brotherhood are part of wider tension across the Gulf. Last week, the UAE, Bahrain and Saudi Arabia recalled their ambassadors from Qatar, accusing the country of meddling in their internal affairs. Qatar has been a supporter of the Muslim Brotherhood, both in its coverage from Al Jazeera and providing a base for controversial Egyptian cleric Yusuf al-Qaradawi.

The UAE’s draconian cybercrime law has come under fire since being updated in 2012. Last December, an American received a one-year prison sentence, convicted of violating the law after taking part in a parody video about Dubai and posting it on YouTube. The American and seven other defendants were accused of “defaming the UAE’s image abroad.” The American was released after spending nine months behind bars.

The UAE has not faced the same political turmoil as witnessed throughout the region, including Bahrain and Kuwait. Heavy-handed tactics from state security officers have helped draw bright “red lines” about what type of dissenting speech is tolerated.

Christopher Davidson, a Gulf expert at Durham University and author of After the Sheiks, told Al-Monitor the latest convictions add to scores of Emiratis who are being “unjustly detained and then imprisoned for their political views and willingness to express themselves.”

He noted that the latest arrests from Ras al-Khaimah and Fujairah show that detentions of Emiratis have spread across all seven Emirates.

An official with the state news agency told Al-Monitor they had no information about the convictions of the two Emiratis.

The UAE government seems eager to continue to arrest anyone who speaks out on social media in favor of reform. The internal move mirrors their efforts externally, financially supporting the military government in Egypt as it cracks down on anti-coup protesters, including hundreds guilty only of expressing dissent. By withdrawing their ambassador from Qatar, the UAE government is taking the same hard line toward that country and further decreasing the amount of free speech tolerated in the Gulf.