UAE Twitter activist not guilty but still in custody

Despite being acquitted of the charges against him, Obaid Yousef al-Zaabi remains in custody since December 2013 after being interviewed on CNN about his Twitter activism. 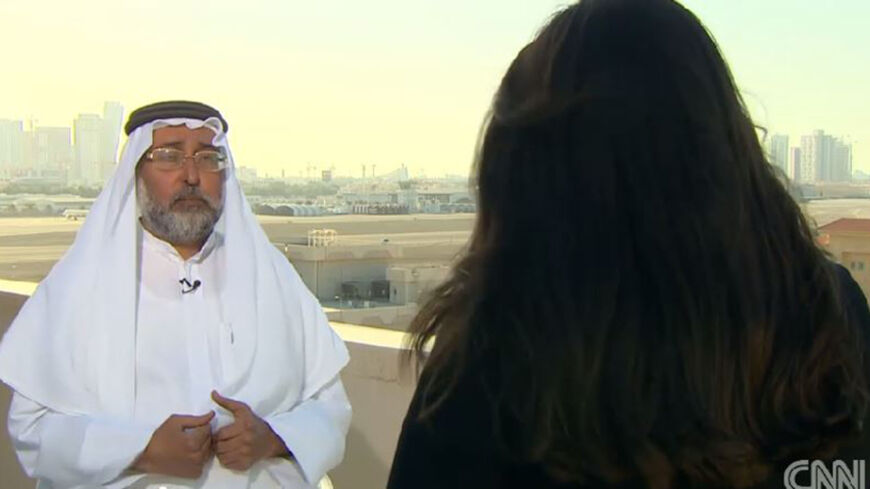 Obaid Yousef al-Zaabi is interviewed on CNN in the United Arab Emirates, in December 2013. - CNN.com

An Emirati who was arrested after criticizing the lack of free speech in his country in an interview with CNN has been acquitted of the charges against him, but is still being held by the enigmatic security forces of the United Arab Emirates (UAE).

Obaid Yousef al-Zaabi was arrested Dec. 12, 2013, after speaking to CNN about his earlier arrest for tweets that criticized the authoritarian government.

“I will continue forever to defend human rights and the rights and dignity of our people, our freedoms and our political rights,” Zaabi told CNN. “I’ll do this in order to guarantee a better future for our people and the coming generations so that they can be in a situation in which these freedoms are set in stone.”

The day after the interview aired, Zaabi disappeared, presumably at the hands of the security forces. CNN’s Sara Sidner, who interviewed Zaabi in December, declined to comment on the case.

The UAE has not issued any public statements about the case, and it has not been covered in the local press. Information about the charges and the not guilty verdict has come from family members via Amnesty International.

Zaabi was likely charged with violating the country’s strict cybercrime law that makes it a crime to use social media to “damage the reputation, prestige or stature of the state or any of its institutions.”

The State Security Chamber of the Federal Supreme Court in Abu Dhabi acquitted Zaabi of all charges June 23. He still remains detained despite the acquittal, an odd verdict since the cybercrime law is written so broadly that virtually any critical speech could be judged as “damaging” to the image of the state.

His family says they have seen Zaabi only once since his arrest seven months ago. He is reportedly being held at the prisoners ward in Sheikh Khalifa Medical City Hospital in Abu Dhabi. Zaabi suffers from advanced arthritis and rheumatism and has difficulty walking.

Emirati human rights advocate Ahmed Mansour told Al-Monitor that Zaabi's continued detention is “not surprising.” Mansour said the security forces want to keep Zaabi detained because they are “worried if they release him he will go active on the online media again.”

Christopher Davidson, a UAE expert at Durham University and author of "After the Sheiks," told Al-Monitor that the arrest sends a message to Emiratis. He said, “Discussing UAE internal politics with outside media is heavily frowned upon and punishments can be expected.” Davidson also said that the continued detention despite the acquittal shows that the state security apparatus exists outside of the legal structure of the UAE.

“Most human rights organizations believe that political prisoners in the UAE are rarely held in the main state prisons, but rather in security prisons,” he said. “As such, they appear to be operating in a parallel legal (or illegal) universe.”

Since the Arab Spring took off in 2011, the UAE has cracked down on speech in a variety of ways. Mansour and four other Emiratis were arrested, convicted and pardoned in 2011 for their critical speech on an online forum. In 2012, the UAE passed the cybercrime law without any discussion or review by the Federal National Council, a representative body that normally discusses legislation. Observers deemed the cybercrime law a “serious threat to the liberty of peaceful activists and ordinary citizens alike.”

In 2013, the government convicted 69 Emiratis of attempting to overthrow the government, but many critics said the defendants were only guilty of calling for reform or criticizing government policies. Many conservative Muslims, for instance, posted on social media platforms their disapproval of alcohol sales and other policies that make the UAE attractive to Western expatriates.

In another development, the International Center for Justice and Human Rights (ICJHR) called attention to the continued detention of Osama Najjar. The Emirati had spoken out on Twitter about the conviction of his father in the mass sedition trial of 2013.

Najjar had used Twitter to voice support for the defendants in the trial and to condemn their imprisonment and treatment. He also reported that his father was not allowed to call his family, according to a report from Reporters Without Borders.

The ICJHR called for authorities to move forward with his case and investigate allegations of torture while in detention.

The results of these actions against Emiratis leave little room for free speech and send the message that security appears to always trump free expression in the UAE.