If Turkish President Recep Tayyip Erdogan pushes for snap elections, he may be disappointed with the results. 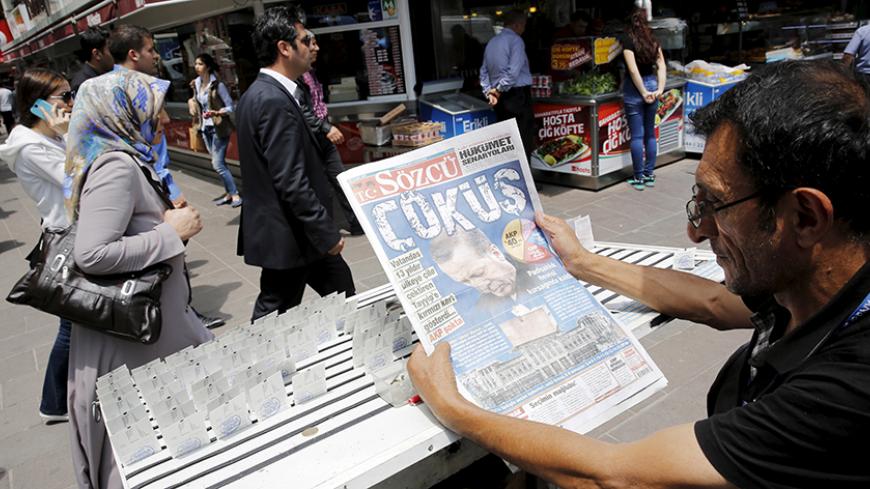 A lottery ticket vendor reads a Turkish newspaper with the headline "Downfall" and a portrait of Turkey's President Recep Tayyip Erdogan, in Ankara, June 8, 2015. - REUTERS/Umit Bektas

There is a quasi consensus in Turkey that the June 7 parliamentary election results have ended President Recep Tayyip Erdogan’s dreams of the executive presidency, introducing an increasingly authoritarian one-man rule. The election results have restrained Erdogan's ambitions and brought optimism that Turkey’s democratic experiment could ultimately be successful. Turkish democracy proved that it is much more resilient than many thought prior to the elections.

Erdogan’s dreams were shattered on June 7, but no sane mind in Turkey ever thought that the president would respect the election results and continue to function within the constitutional limits of his post. According to the Turkish Constitution, the president does not have executive powers. If not all, the overwhelming majority of the observers, including those who know him well, were sure that Erdogan would try to fight back to regain his lost power with an unmistakable survival instinct.

According to some, primarily non-Turkish, observers, he can. Shadi Hamid of the Brookings Institution ended his essay titled “Down, but not out: The essential resilience of Erdogan and the AKP” as follows: “Demonstrating that coalition governments are less stable and effective is what Erdogan may now be hoping for. Some Turkish voters may already be feeling buyer’s (or seller’s) remorse. One post-election poll suggested that the AKP [Justice and Development Party] would increase its vote share from 41% to 45% if snap elections were held.”

However, what Hamid says is totally incorrect as the “one post-election poll” he cited was held by a staunchly pro-AKP company. Having not much credibility, its findings — allegedly based on a June 8 poll — did not get much attention from the Turkish public.

If these non-Turkish observers were to be true Turkey experts or patient enough to wait for the findings of credible pollsters, they would reach different and better analyses.

For instance, one of the most credible pollsters in Turkey, Metropoll, shared its findings on June 26. According to the survey, “confidence in President Erdogan is at its lowest level ever.”

This poll, which was conducted in the aftermath of the June 7 elections, indicates that the public confidence in Erdogan stands at 37.5%. This figure was as high as 71.7% in December 2011 and around 49% in 2014, right after the March 30 local elections.

According to the same survey, 50.6% of the electorate put the blame for the AKP’s election failure on Erdogan, while 11% blamed Ahmet Davutoglu, the party’s chairman and prime minister.

In an interview with influential daily Hurriyet, Ozer Sencer, the director of the Metropoll Strategic and Social Research Center, disclosed the findings of another survey that the center conducted in the post-election period, which indicates that a possible re-election would not yield much different results than those of the June 7 elections.

Sencer, whose polling company had the most accurate forecast of the June 7 elections, said in case of a possible re-run elections the result would be as follows: 41.6% for the AKP; 25.1% for the Republican People's Party; 16.2% for the Nationalist Action Party; and 12.9% for the Peoples’ Democratic Party. These figures suggest very minimal deviation from the June 7 elections.

Erdogan is banking on the failure of the parties to form a coalition government within the legal period. This would lead to a crisis, with snap elections to likely be held in November.

This scenario presumes that Erdogan can make a comeback in order to push his agenda of an executive presidency once again; he would ask for a safe AKP majority, saying that otherwise the country would enter an insurmountable political and economical crisis.

Seemingly, Turkey may end up with snap elections, as the parties elected may be unable to form a government because of their incapacity and democratic immaturity.

Yet, it seems unlikely that the results of a possible snap elections would bring Erdogan the influence that he enjoyed until the fateful date of June 7.

One indicator is the TV coverage Erdogan has been enjoying. After June 7, he withdrew from the public eye, and was only seen twice in two weeks. For two years, until June 7, Erdogan appeared in live TV broadcasts at least twice a day. In fact, most prime-time news programs — if not all — started their broadcast with news about him.

After nearly three weeks of the hard-to-miss silence, Erdogan is back again. On the occasion of the holy month of Ramadan, he appears every night at a different venue for iftar (breaking of the day-long fast), and does not miss an opportunity to deliver a speech. But this time only a handful of TV channels over which he exerts full authority televise those speeches live.

There are more and more cracks in his own ranks and these cracks are visible from vitriolic polemics between the pro-AKP columnists of the pro-government media. They are soul-searching in an effort to find the main cause behind the AKP's election results. And some are critical of him, which was unthinkable before June 7.

Erdogan's recent venomous statements are mainly directed at the Kurdish Democratic Union Party and People's Protection Units in Syria, after the Kurdish forces pushed out the Islamic State (IS) from the Syrian border town of Tell Abyad. The liberation of Tell Abyad was greeted with joy by the United States, countries in the region and around the world, but increased worries with some in Turkey as they now fear that the Kurds in Syria may achieve autonomous administration of an area hundreds of miles in length adjacent to Turkey.

On one occasion, Erdogan thundered, “A formation of a state in northern Syria and to the south of Turkey will not be permitted.” The Turkish president has never made such a statement in regard to IS, even after it announced the establishment of "a caliphate" along Turkey's southern border.

These days, Turkey wonders whether a military intervention in Syria is in the cards. On June 28, headlines in the pro-government dailies suggested that the military planning is ready for such an endeavor.

However, the top echelons of the general staff leaked to hand-picked reporters that the military resists the temptation of Erdogan, who is constitutionally the “commander-in-chief.” The general staff asked for a "written directive” from the government for the task, and even though Davutoglu has sent this, the military is dragging its feet, raising various legal concerns to not implement the order.

The Hurriyet headlines June 27 took on the ongoing public debate in Turkey, with a story titled, “Behind the curtain of the military-government dispute,” and a byline of the newspaper’s Ankara bureau chief.

While Turkey's president delivers incendiary Ramadan speeches on Syria, many have begun to criticize him for his adventurism, saying that he is playing with fire.

For Erdogan to gain his previous stature and for a political comeback, an adventurous foreign policy move cannot be totally excluded. But that could also accelerate his eventual doom.

Has the end of the "Erdogan era" begun?