A successful conclusion to the negotiations on Iran's nuclear program could doom the effort by hard-line former nuclear negotiator Saeed Jaili to return to politics as a member of parliament. 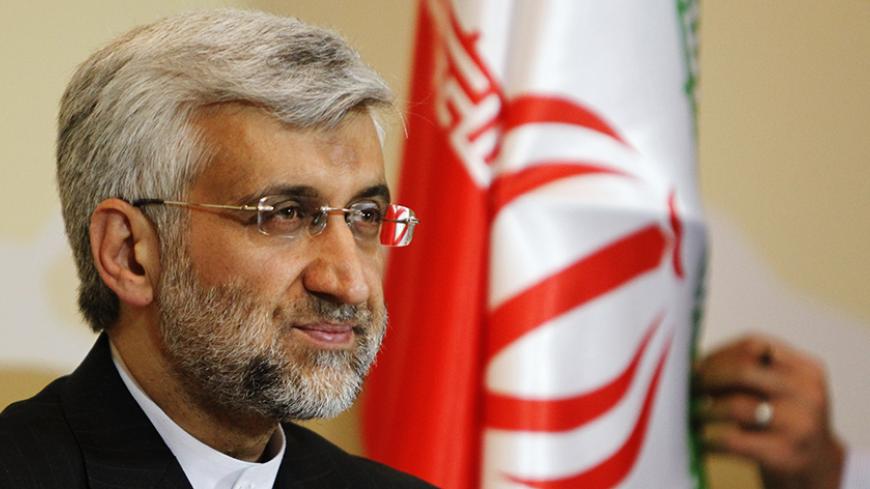 In October 2007, Ali Larijani resigned from his post as secretary of Iran’s Supreme National Security Council because of what he called a “serious managerial disagreement” with President Mahmoud Ahmadinejad. Deputy Foreign Minister for European and American Affairs Saeed Jalili replaced him. Now, eight years later, the Iranian media is reporting that Jalili is preparing to run for parliament and to replace Larijani again, this time as speaker of the Iranian parliament.

In May, Aryanews reported, “It seems Saeed Jalili, who surprisingly became a candidate in the 11th presidential election and changed the political equations of the Principlists and the election itself, has now apparently decided to try his chance at becoming a parliamentarian.” With parliamentary elections scheduled for February 2016, there have also been reports that the ultraconservative Ayatollah Mohammad Taghi Mesbah Yazdi, head of the Imam Khomeini Institute and a supporter of Jalili’s bid in the 2013 presidential polling, is considering once again putting his weight behind him.

It was reported in April that Jalili had held a secret meeting with Mesbah Yazdi in Qom after the Jebhe Paydari bloc (Steadfast Front), composed of Principlists and former Ahmadinejad associates, had allegedly asked Mesbah Yazdi, their spiritual leader, to persuade Jalili to run for parliament. Some analysts said the meeting reminds them of the one Jalili held with the ayatollah days before becoming a presidential candidate in 2013. They also view the meeting as Mesbah Yazdi’s first step toward taking an active role in the country’s 10th parliamentary elections.

Although organizing and planning for the upcoming elections are taking place behind closed doors, the Iranian Labor News Agency (ILNA) reported in May that the leaders of the three major Principlists groups had met in Qom. Unlike previous meetings of the three, the latest round — involving Ayatollah Mohammad Yazdi (head of the Teachers Association of the Qom Theological Seminary), Ayatollah Movahedi Kermani (secretary-general of the Association of Combatant Clergy) and Ayatollah Mesbah Yazdi — did not receive much coverage by media close to conservative establishments. It was only reported that the meeting was held "with the aim of reaching unity and convergence among the Principlists.”

The Principlists, who hold the majority of seats in parliament, face the real possibility of losing their grip on the legislature if they fail to reach a consensus among themselves. “After the defeat of Principlists in the 2013 presidential elections [won by the moderate Hassan Rouhani], all the Principlist groups are determined to achieve unity to avoid another defeat in the 2016 polls,” Seyyed Amir-Hossein Ghazizadeh-Hashemi, a Principlist parliamentarian and member of the Jebhe Paydari told Al-Monitor. “Our discussions are currently focused on how to bring all the Principlist fractions along with each other. We’ve not talked about any specific candidate, but if Mr. Jalili becomes interested in running [for parliament], Jebhe Paydari will definitely support him.”

Many, including Ghazizadeh-Hashemi, believe the Rouhani government and supporters of the president are also trying to reach a consensus to take the next parliament and complete their “unfinished job.”

Since last year, Jalili has been giving speeches and conducting question-and-answer sessions at universities and mosques around the country in a number of cities, including Birjan, Bushehr, Qom and Tabriz. Anyone interested can follow news of his travels and events on his website and Instagram account.

Jalili had initially refrained from talking about the nuclear negotiations under the Rouhani government, but in recent months he has taken a critical tone toward them. This shift has been viewed by some as evidence of his intention to run for parliament. As negotiations over Iran’s nuclear program approach their June 30 deadline, some observers think the result will determine the lineup of the parliamentary elections, which have been described as “crucial” for Rouhani's presidency.

Ghazizadeh-Hashemi, like other members of the Jebhe Paydari bloc, has been one of the main critics of the nuclear negotiations under Rouhani. He told Al-Monitor that Rouhani has “polarized” the negotiations and “tied the country’s political fate to the nuclear talks.” Thus, he stated, “It is natural that it will increase the influence of negotiations on the upcoming elections, at least in the short term.”

A political analyst who requested anonymity told Al-Monitor. “If there is a deal at the end of the talks, the great majority of the next parliament will without a doubt be controlled by Reformists and moderates who supported Rouhani in 2013.” Alternatively, he said, “If the talks fail, candidates from the Principlists camp and potential candidates like Saeed Jalili will have a much stronger presence in the next parliament, no matter if Ayatollah Mesbah Yazdi supports them or not.”

Although Jalili has not officially announced his intention to run in 2016, many say the media-shy war veteran, who had initially rejected speculation and calls to run for president in 2013, might again act similarly and announce his parliamentary candidacy at the eleventh hour.