The cutting off of economic support from Iran and the closing of smuggling tunnels to Egypt have left the Islamic Jihad unable to pay the salaries of its personnel. 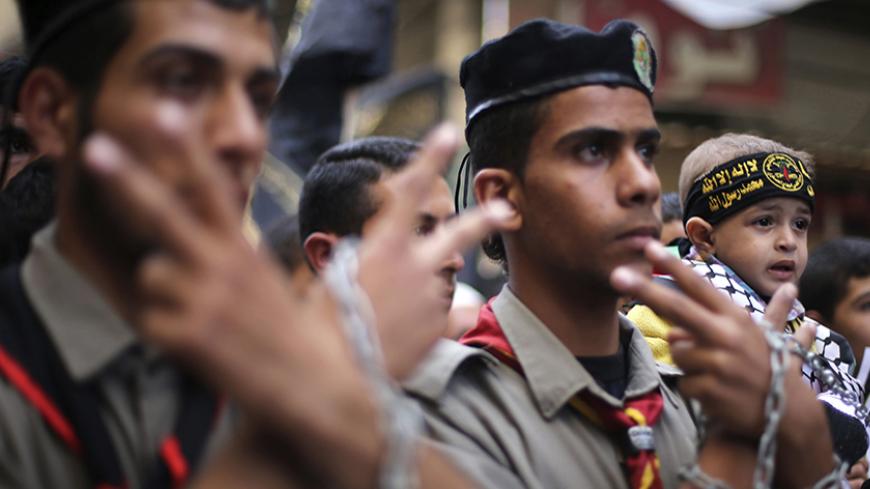 A Palestinian boy wearing an Islamic Jihad headband joins other Palestinians taking part in a protest against what they say are recent visits by Jewish activists to Jerusalem's Al-Aqsa Mosque, in Khan Yunis in the southern Gaza Strip, Nov. 7, 2014 - REUTERS/Ibraheem Abu Mustafa

GAZA CITY, Gaza Strip — The Islamic Jihad in the Gaza Strip is suffering from a severe financial crisis that has resulted in a delay of several months in the payment of salaries, both to its military wing (Al-Quds Brigades) personnel and those working for its media and civic organizations, due to the stifling siege imposed on Gaza and the paucity of revenues from its main sponsor, Iran.

One of the movement’s leadership figures told Al-Monitor on condition of anonymity that the Islamic Jihad has been suffering for months from the worst financial crisis in its history, leading to the organization shutting down some of its civic and research institutions. This has also led to the reduction of the budget set aside for some media organizations, to the point that some have had to let go of a number of their employees.

The same source said, “It has been months since members of the Islamic Jihad, including those in the military wing, were paid their allowances. In addition, some institutions will be closed down or their offices merged into a single location to reduce expenses as much as possible.”

In separate interviews with Al-Monitor, staff members of some Islamic Jihad-affiliated media and research institutions confirmed not having received their salaries for several months, and that they were performing minimal activities as a result of a sharp drop in resources.

In that context, one source said, “We go to work day after day, but we cannot work each day due to the financial inability to cover the costs of running the electricity generator that is needed as a result of the constant power outages. The organization has also reduced the number of employees because it could not pay their salaries.”

Since its inception in November 1981, the Islamic Jihad has been receiving generous financial backing from the Islamic Republic of Iran. In addition, its members received military training in Iran and south Lebanon at the hands of Hezbollah, as well as weapons and various types of ammunition from both Iran and Hezbollah smuggled into the Gaza Strip.

The same source attributed the current financial crisis suffered by the Islamic Jihad to the financial blockade imposed on the Gaza Strip, particularly after the closure of the tunnels linking Gaza to Egypt, and the unrest witnessed in the Sinai Peninsula. He said, “The siege is one of the primary reasons hindering the entry of funds to the Gaza Strip. Furthermore, Iran cut back its financial support at the onset of Operation Decisive Storm in Yemen.”

The source declined to confirm whether Iran stopped funding the Islamic Jihad due to the latter’s failure to back the Houthis in Yemen, and refraining from publicly denouncing the Saudi war waged against them there. “There is no proof of that, but political polarization in Yemen delayed the delivery of funds,” the source said.

However, Al-Quds newspaper quoted sources from the Islamic Jihad, both at home and abroad, as saying that a political crisis erupted with Iran due to the Islamic Jihad’s neutral stance and its failure to denounce the war in Yemen. “Tehran stopped its financial backing to the movement, which engendered the latter’s financial crisis. … The dispute can be mainly attributed to Iran’s request that the [Islamic] Jihad issue a clear statement vis-a-vis the crisis in Yemen, in support of the Houthis and in rejection of the Saudi-Gulf offensive — which the movement refused to do, insisting instead on maintaining its neutrality. As a result, the Islamic Jihad is seeking alternatives to Iran’s backing — either through self-supervised programs in Gaza or other sources,” the newspaper wrote.

Hamas issued a statement March 28 in support of Operation Decisive Storm, while the Islamic Jihad did not issue any official statements or comments to that effect. The Popular Front for the Liberation of Palestine publicly rejected the war in Yemen.

Islamic Jihad leaders in Gaza declined to talk to Al-Monitor about the financial crisis, which they consider to be an internal matter that does not need to be discussed in the media.

Ezzedine Ibrahim, Palestinian-affiliated author based in Jerusalem, affirmed that the financial crisis was due to Iran ending its backing, as a result of the Islamic Jihad’s neutral stance toward the Yemeni crisis.

In a newspaper article, Ibrahim wrote, “The [Islamic Jihad] is facing the same fate suffered by Hamas when Iranian backing ceased. Why did Iran abandon the Islamic Jihad so suddenly? Did the former have a change of heart and rebel against its former ideologies and principles? Did Iran abandon its allies, and if so, in favor of whom? Who benefits from the Islamic Jihad’s demise in Palestine? What would [Ayatollah Ruhollah] Khomeini say with regard to the current situation? Is this truly what he wanted his revolution, reign and ambitions to lead to? Or did a lot change over the years? Did the Islamic Jihad, which put its fate exclusively in the hands of Iran, deserve to be sentenced to death?”

Another Islamic Jihad source confirmed that various mediation efforts led by Iran and Hezbollah have taken place and continue to be carried out between the Islamic Jihad and Iran, aimed at restoring the relationship to what it was prior to the political turmoil caused by the war in Yemen. On condition of anonymity, the source added, “Hezbollah’s leadership in Lebanon embarked on numerous mediation efforts, and many meetings were held with [Islamic] Jihad leaders, most prominent among them the movement’s Secretary-General Sheikh Ramadan Shalah, who visited Tehran more than once recently.”

The source added, “Iran can ill afford to sever the last of its ties with Sunni movements in the region, particularly after its relationship with Hamas came to an end. It appears that Iran only wants to temporarily punish the Islamic Jihad for its stance; the current financial crisis, though the most serious to date, is not the first, nor will it be the last.”