Palestinian Islamic Jihad is mired in an internal dispute as members push the leadership to permit internal elections and expand into a popular movement. 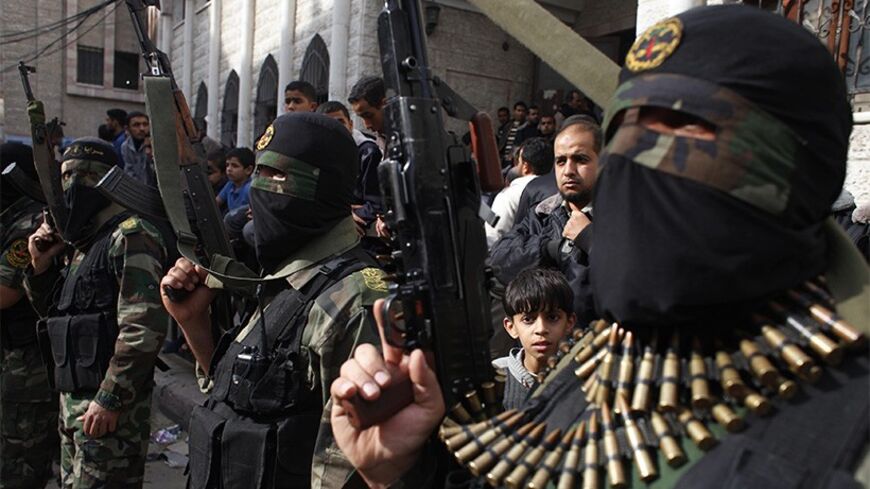 Islamic jihad militants take part in the funeral of three comrades, who were killed in an Israeli air strike, in Khan Younis in the southern Gaza, Strip March 11, 2014. - REUTERS/Ibraheem Abu Mustafa

GAZA CITY, Gaza Strip — Disputes within Islamic Jihad in the Gaza Strip have escalated in recent months. Members have been demanding internal elections for leadership roles, and an end to appointments of positions and unilateral decision-making. The push stems from a desire among some members to transition the movement into a popular movement. There have also been demands not to allow Hamas to monopolize the Palestinian arena.

Well-informed sources from within Islamic Jihad's leadership told Al-Monitor that a crisis has erupted as a result of the demands. The internal disputes also relate to powers granted to the leadership, decision-making mechanisms, the movement's positions toward various political issues within Palestine and how to deal with other Arab crises that have repercussions on the Palestinian issue.

"There are internal differences as a result of the lack of internal regulations, and the absence of systems to regulate relations within the movement and decision-making mechanisms," said an Islamic Jihad source, who spoke to Al-Monitor on condition of anonymity.

"The differences are due to the existence of unilateral decision-making with respect to administrative and financial issues. The appointment and dismissal of field officials are conducted unilaterally as well," the source added.

The source said that, for several years, there have been disputes within Islamic Jihad due to the lack of internal regulations, and there have been demands to hold internal elections for governing bodies. However, about two years ago, the leadership tried to avoid holding elections by forming a political bureau for the first time in the history of the movement, and its members were appointed without elections, the source added.

"The problem fundamentally lies in the mechanism of decision-making, and in most cases decisions are made individually [due to] the lack of internal regulations," Abdullah al-Shami, an Islamic Jihad leader, told Al-Monitor.

The anonymous source said administrative regulations and systems were developed long ago, but they have not been effected in an official manner. Thus, according to the source, these regulations became "mere ink on paper. They were not actually applied because there was no desire to apply them within the leadership, as this would restrict their freedom to take administrative and financial decisions."

"There are no regulations, not even in a material sense, whether regarding salaries, the operating budget, incentives or aid. [Decisions relating to these matters are] carried out in an individual manner, and there is corruption in the operating process and when it comes to disbursing money. This is not befitting of a 'mujahed' Islamic movement," the source added.

Islamic Jihad has at times experienced financial crises, causing delays in the payment of salaries to its members or in delivering allocations to various institutions. While some sources attributed these crises to difficulties in bringing money into the Gaza Strip, others said to Al-Monitor it was due to a mismanagement of funds within the movement.

Other sources close to the movement's current leadership told Al-Monitor that the lack of adopted regulations was due to Islamic Jihad not holding a general conference as a result of current political and security conditions.

"Two years ago, internal regulations and bylaws were set, but the movement was unable to hold a general conference as a result of regional changes and the complex security conditions experienced by the Palestinian people in the West Bank, abroad and in the Gaza Strip," one source said.

Nafez Azzam, a member of Islamic Jihad's political bureau, expressed his surprise that these topics were being raised within the membership at this particular time. "We prefer not to comment on these things. We don't want to distract our people with any internal issue in light of the rabid campaign waged by Israel and their feverish efforts to undermine the aspirations of the Palestinian people," said Azzam.

Speaking to Al-Monitor, Azzam refused to confirm or deny whether elections would be held soon within the movement. "Even if there were internal elections, we are not accustomed to speaking to the media about them, whether they occur or not," he noted.

"It is the right of the Palestinian people to be assured that Islamic Jihad, a movement they know well, is loyal to its principles, protects their rights and will continue under any circumstances to carry out its national and legitimate duty," Azzam added.

But Islamic Jihad senior official Mohammed Shalah said the internal disputes were close to being resolved.

"The disputes are on the verge of being settled. We are moving toward implementing new understandings and arranging the internal situation," Shalah told Al-Monitor.

Shalah, the brother of Islamic Jihad Secretary-General Ramadan Shalah, added, "There is an agreement within the leadership and it was signed, and the only thing delaying its implementation is what is happening in neighboring countries. [The leadership] is following up on financial and administrative issues."

Islamic Jihad has been a predominantly military movement since its founding by Fathi Shaqaqi, after he defected from the Muslim Brotherhood in the 1980s. The movement has strong ties with Iran, from which it receives financial and logistical support.

Despite the generous funds Islamic Jihad receives from Tehran, it has not been able to reach the level of a popular movement. Its social and charitable activities inside the Gaza Strip are limited, as opposed to those of Hamas and Fatah.

Some Islamic Jihad members pushing for an internal reform attributed the movement's weak social and charitable network to internal and external parties that do not want the movement's influence to expand. There is a push to keep Islamic Jihad confined to a military framework, the sources explained to Al-Monitor.

"Neither [Islamic] Jihad's leaders abroad nor Iran are interested in transforming the movement into a centralized organization or a mass movement that has institutions and works according to a democratic system. [Islamic Jihad leaders] want to make decisions unilaterally, so that they can maintain control of the movement in the event of a confrontation with Israel," one of the members added.

The members also accused Hamas of seeking to curtail Islamic Jihad's capacities, especially when it comes to public work, and not allowing them to operate freely in mosques and civil institutions.

"Hamas is doing everything it can to prevent Islamic Jihad from transforming [into a movement that performs] field work at the social and popular levels,” a member said. He added, “It will not allow for another Islamic force that competes with them, and this explains the presence of ongoing disagreements here and there on the ground between members of Hamas and Islamic Jihad."