On top of its many other security and political challenges, Hamas is also dealing with the radical Islamist elements in Gaza that are firing rockets at Israel while Hamas struggles to maintain a cease-fire agreement. 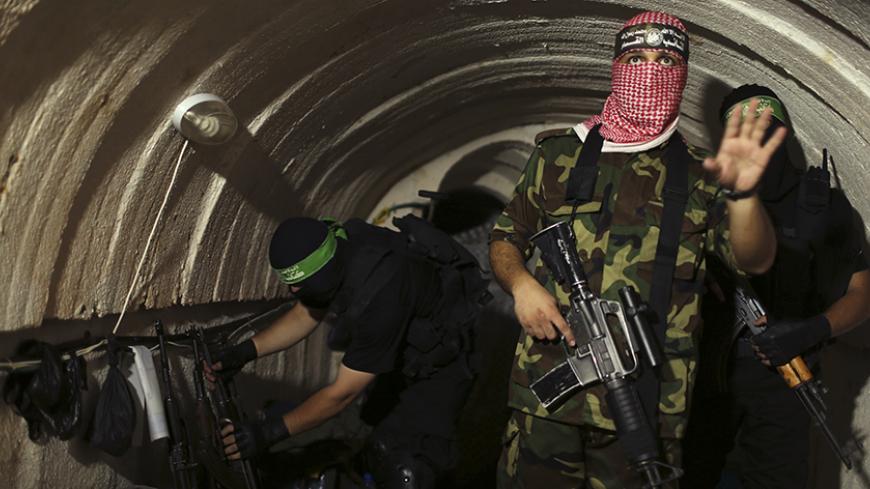 A Palestinian fighter from the Izz ad-Din al-Qassam Brigades, the armed wing of the Hamas movement, gestures inside an underground tunnel in Gaza, Aug. 18, 2014. - REUTERS/Mohammed Salem

The political and security situation in the Gaza Strip has become more complicated with the rise of Palestinian groups that are reportedly sympathetic to the Islamic State (IS) and operate under its banner.

While radical jihadist Salafist elements have existed in Gaza for years, this is the first time that responsibility for a rocket fired at Israel has been claimed by an organization apparently publicly aligned with IS. The claim came by way of a statement posted on Twitter under the name of Omar Hadid Brigade, reading that the June 2 attack was an act of revenge for Hamas killing its fighter Younis Hanar on June 1. Factions in Gaza often show their dissatisfaction with Hamas by firing rockets at Israel while Hamas is under a cease-fire agreement.

Israel holds Hamas responsible for any attacks against it and on June 4, Israeli warplanes bombed two training bases of the Izz ad-Din al-Qassam Brigades in Gaza. No one was injured.

While it is early to say whether IS has found a foothold in Gaza, there are signs of increased pressure in the past few months on women, intellectuals and moderate figures in Gaza from radical Islamic elements.

A major step up from demanding that women dress according to their version of Islamic attire, IS entering the security domain indicates more troubles for the Hamas security apparatus, already weakened by reduced funding from Iran after disagreements over the Syrian and Yemeni conflicts. In trying to govern a community with different levels of religiosity, Hamas has had to moderate its social code, leaving it vulnerable to attacks from more radical groups.

The situation in Gaza is quickly deteriorating, and this chaos is the perfect breeding ground for radicals. UN special envoy Nickolay Mladenov told the UN Security Council May 19 that Gazans are angry at everyone. He said Gaza is “angry at the blockade; angry at the closure of the Rafah crossing; angry at Hamas, including for imposing an illegal Solidarity Tax; at the donors for not honoring their commitments to reconstruction; at everyone.”

There is no doubt that military and political leaders in Tel Aviv and Jerusalem are pleased with this enticing addition to their political rhetoric. IS, which most countries agree is an international terrorist entity, is much easier to attack than Hamas, an organization with which Europe is talking and whose name has been lifted from the list of sponsors of terrorism.

Under the increasing pressure of global boycotts, Israeli Prime Minister Benjamin Netanyahu attempted to forge a nonexistent link between the boycott movement and IS. “They boycott Israel but they refuse to boycott IS," Netanyahu said June 3 in Jerusalem while meeting with the Canadian foreign minister, in reference to a call by British students to join the boycott against Israel.

Netanyahu's accusations of links between IS and the boycott movement are based on incomplete information regarding the position of the National Union of Students. Back in December, the union temporarily rejected an incomplete Kurdish resolution criticizing IS and requested that the motion be revised. The next version passed. Criticism of IS was present in both drafts, but the Israelis falsely claim that the failure of the initial resolution meant that the union somehow was soft on IS.

Palestinian frustration over the failure of Fatah and Hamas to reconcile even a year after the creation of the national consensus government is a major source of this chaos in Gaza.

Egypt continues to keep the Rafah border crossing closed, adding to this frustration. The crossing has been closed since Oct. 24, 2014, except intermittently, the UN Office for the Coordination of Humanitarian Affairs revealed in its May 25 report.

Israel shows no interest in easing the seven-year blockade making the lives of Gazans unbearable. In March, six months after the most recent war on Gaza, MSNBC reported, “There are at least 11,000 Gazans living in UN shelters, many of them displaced during the hostilities. According to the nongovernmental organiza Gisha, not a single destroyed house during the conflict has been rebuilt.”

The failures to ease the blockade and begin the reconstruction effort in earnest are certainly major contributors to fertile ground for the rise of radical elements in the Gaza Strip.

The internal situation is nearing the point of exploding, as the UN envoy told the UN Security Council, and the most effective way to bring attention to Gaza has been the firing of rockets at Israel. Hamas and its major ally, Islamic Jihad, have too much to lose by carrying out such attacks, thus giving space and opportunity for even more radical elements to fill the gap, break the deadly silence and divert world attention from other conflicts. Unless some real changes take place, it is highly likely that this will not be a one-time attack.