Amman and Ramallah are not seeing eye to eye at the level of politics and coordination, threatening national unity in both Jordan and Palestine. 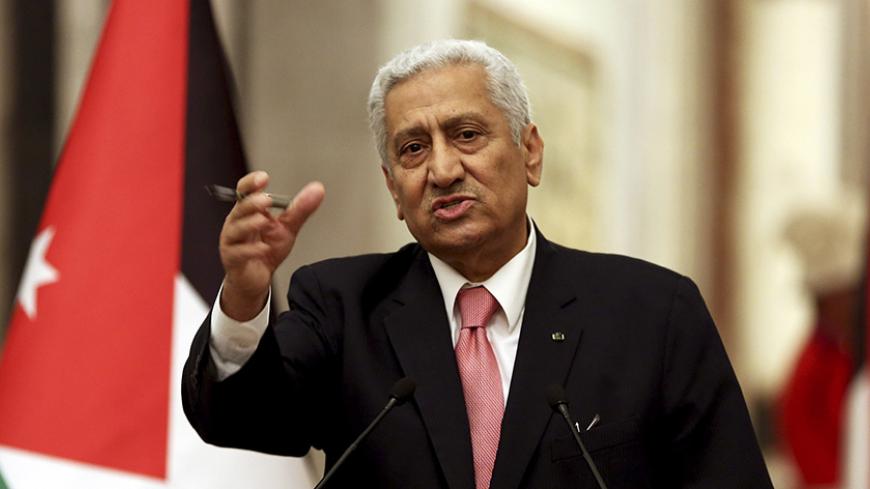 Relations between Jordan and the Palestinian Authority (PA) are under stress, as a number of analysts and commentators in Amman have confirmed to Al-Monitor. One indication was Jordanian Prime Minister Abdullah Ensour’s statement to Israeli Radio’s Arabic service May 23 that he hoped there was no “secret back-channel negotiations between Israel and the Palestinians … that would lead to a poor agreement like the Oslo Accord.” This was not the first time that Ensour had expressed such concerns. Pundits here were quick to point out that despite a Palestinian denial that such negotiations existed, the prime minister’s statement confirmed that bilateral ties were not at their best.

Political commentator Orieb al-Rintawi agreed that relations between Amman and Ramallah are going through “a rough phase.” He told Al-Monitor that it appears “Jordan does not trust Palestinian assurances that there are no back-channel negotiations with Israel. Furthermore, even if such negotiations are taking place, Jordan is not sure about the ability of the Palestinian negotiator to reach a good deal.” He pointed out that Jordan has “deep strategic interests in the outcome of final status negotiations because they affect the future of East Jerusalem, borders, water and the thorny issue of refugees.”

Rintawi added that Ensour’s statements also point to Jordan’s negative view of the Oslo Accord, which was negotiated in secret and without Amman’s knowledge back in 1993. But he said, “Unlike former Palestinian leader Yasser Arafat, President Mahmoud Abbas is keen on maintaining good working relations with King Abdullah, especially since both sides are committed to the theory that Jordan is Jordan and Palestine is Palestine and that Amman has no interest in representing the Palestinians in future negotiations.”

Bassam Badarin, an Al-Quds Al-Arabi newspaper correspondent in Amman who monitors Jordanian-Palestinian issues, said that relations can be described as “lukewarm” at this stage. He told Al-Monitor that officials in Amman talk about “poor coordination” between the PA and Jordan over peace negotiations. On the other hand, Badarin said, “President Abbas has complained that he has not had a top-level meeting with Jordanian officials in the last six months.”

But tension between the two sides became a public issue, especially in Jordan, when a few days earlier, on May 22, the most senior Jordanian cleric, Ahmad Huliel, was prevented by Palestinian worshippers from delivering the Friday sermon at Al-Aqsa Mosque in East Jerusalem. He was manhandled by assailants and driven out of the mosque. The incident created public backlash in Jordan, which has a special custody over Muslim sites in the Holy City under its peace treaty with Israel. Initially, the PA accused members of an extremist Islamist movement of standing behind the attack, but when Al-Tahrir Party issued a statement May 23 denying any role, Palestinian officials blamed Hamas sympathizers.

The incident triggered a wave of angry, sometimes racist, reactions on social media and political salons in Amman. Mohammad Abu Rumman said, “The incident raised questions about Jordan’s historical role as a caretaker of religious sites in Jerusalem, the future of that role, and whether there was any collusion between PA officials and those who attacked Huliel.” He told Al-Monitor that a senior Jordanian politician informed him that the incident underlined Jordan’s weakening influence in the West Bank and Jerusalem, especially among the younger generations of Palestinians.

Adding fuel to fire was the controversy surrounding the Palestinian position on Prince Ali bin al-Hussein’s bid to run for the presidency of the world soccer governing body (FIFA) May 29. Ali, brother to Abdullah, withdrew from the contest before a second round of voting was to begin, but the local press and Jordanians on social media outlets accused the head of the Palestinian Football Federation, Gen. Jibril Rajoub, of casting his vote for incumbent President Sepp Blatter. Rajoub, who is also a Jordanian citizen, insisted that he had voted for Ali and told a local website that he was a victim of a conspiracy by his enemies. The incident prompted Abbas to visit Ali at his home June 2 as a gesture of goodwill, declaring that “we are one nation in two states.” But the Rajoub episode triggered angry calls in parliament and on social media to strip him, and others, of Jordanian nationality. Rajoub’s alleged vote against Ali was seen as a betrayal of Jordan and has fueled anti-Palestinian sentiments.

Chief editor of Al-Ghad daily newspaper, Gumana Ghneimat, warned in her June 4 article that such calls were dangerous because they threaten national unity and intimidate Jordanians of Palestinian origin.

The FIFA affair has put unprecedented strain on ties between Amman and Ramallah, but more dangerously it focused attention again on the sensitive issue of relations between East Bank Jordanians and Jordanians of Palestinian origin. Racist slurs were posted on social media against Palestinians, triggering an exchange of insults from both sides.

So tense was the atmosphere that Abu Rumman ran an article in Al-Ghad on June 1 in which he said that right-wing and racist elements have utilized this tense atmosphere to ignite the internal situation and generalize negative attitudes. “We are dealing with two failures here: the failure to integrate Jordanians of Palestinian origin into the political equation … and the state’s failure to integrate citizens from the governorates in economic life.”

According to Abu Rumman, the first failure is intricately tied to the Palestinian question, the political disengagement between Jordan and the West Bank in 1988, a final-status solution and Jordan’s relations with Palestine and Israel.

The Jordanian government took its time before commenting on the state of relations with the PA in the aftermath of the FIFA episode. It was only when PA Prime Minister Rami Hamdallah paid an unscheduled visit to Amman on June 6 and met with Ensour that the latter praised bilateral relations, describing them as deep and vowing not to let anyone disturb them.

In the view of political commentator Shaker al-Jawhari, “Political challenges will continue to disrupt relations between Amman and Ramallah.” He told Al-Monitor that Jordan is weary of Abbas’ position on a final-status settlement with Israel. “Jordan has vested interests in a final deal, especially regarding refugees, compensation, water, Jerusalem and final borders,” Jawhari said. “It is sending a message to the PA that Amman will not be ignored.”

It looks like the storm over FIFA elections and the attack on Huliel has quieted for now, but the incidents have raised concerns about the future of Jordanian-Palestinian relations and threats to national unity in Jordan.