Likud Knesset member Anat Berko says that the bid to suspend Israel from FIFA ''is terrorism in every sense of the term,” calling on the government to fight the BDS movement, “just like we fight against terrorism.” 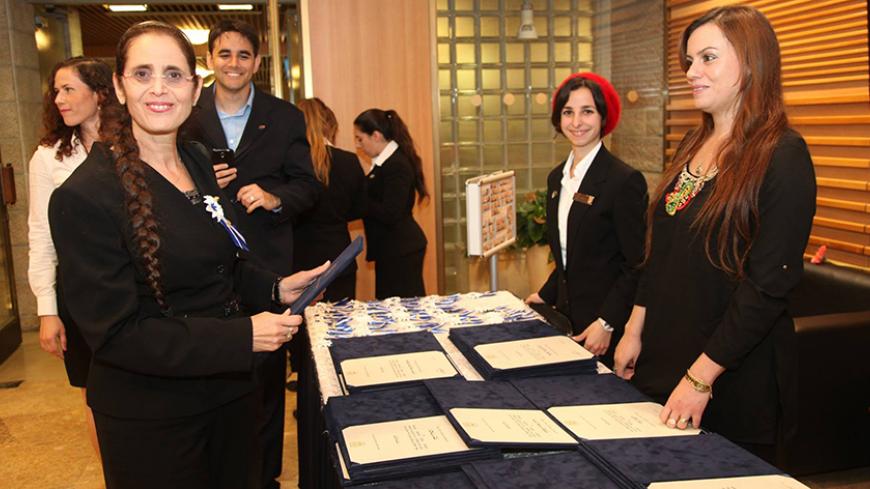 One of the first things that Anat Berko of the Likud did upon entering the Knesset was to form a lobby to combat the delegitimization of Israel and the Boycott, Divestment and Sanctions (BDS) movement. To do this the suicide bombing expert approached Knesset member Michael Oren, Israel’s former ambassador to Washington, who holds a doctorate in Middle East history, and asked him to co-chair the lobby with her.

Within just a few days, Berko and the Kulanu Party legislator easily recruited over 20 Knesset members from the right, the left, the center and the ultra-Orthodox factions. The conflict with the Palestinians at soccer's governing body, FIFA, over the Palestinian request to suspend Israel from the association was brewing in the background, making the issue especially pressing and the new lobby especially relevant.

Though more and more members of the Knesset were joining Berko’s lobby, she received a brusque rejection from Knesset members representing the Joint List, the unified slate of predominantly Arab parties, and Meretz. In an interview with Al-Monitor, she said she was not surprised by the response from members of the Joint List. On the other hand, she was shocked by the decision of the left-wing Meretz Knesset members, who chose to refrain from participating in the struggle against something that she considers terrorism in every sense of the term. “I have no problem with self-criticism, but the real meaning behind this delegitimization and boycott campaign is a call for our destruction. People have to understand that what happened in FIFA was terrorism no matter how you look at it.”

Berko is an interesting figure in the current parliamentary landscape. She is a lieutenant colonel in the reserves, who holds a doctorate in criminology and spent years researching the suicide bomber phenomenon. She published many papers and books on the topic, including a book about female suicide bombers. As a highly regarded expert on terrorism, she was recruited into the Likud’s Knesset list right before the March 17 election by none other than Prime Minister Benjamin Netanyahu himself. In the current Knesset, she serves as a member of the Foreign Affairs and Defense Committee.

Al-Monitor:  What have you concluded from the crisis with FIFA?

Berko:  What we saw in FIFA was a terrorist in sports gear named Jibril Rajoub [head of the Palestinian Soccer Association] leading the push for a boycott of soccer games against Israel. I consider that to be nothing less than an extension of the massacre of the Israeli athletes at the Munich Olympics. It is diplomatic terrorism, but it is still terrorism in every sense of the word, since it undermines the most basic aspects of Israel’s existence. It is another way of saying, “The Jews cannot exist here.” As far as I am concerned, it is nothing less than a blood libel. If there was some remission in the disease known as anti-Semitism after World War II and the Holocaust, what we are seeing now is a new iteration of anti-Semitism, combined with Islamist incitement.

Al-Monitor:  Don’t you think your comparison goes too far? After all, the crisis with FIFA wasn’t a terrorist attack. Isn’t it a legitimate means of fighting Israel?

Berko:  What is happening now is that efforts are underway to shift terrorism to the diplomatic arena. Think about it. We are the only country that actually provides humanitarian aid to Gaza. So many trucks enter Gaza every day. No other country would act that way after confronting so much aggression, directed at its citizens. Now, to take a country like Israel and compare it to [the Islamist group] Boko Haram by associating it with all sorts of things undermines our very existence.

I am familiar with the boycott issue from the lectures I give. I lecture about terrorism quite a bit overseas. These are academic lectures, without the slightest iota of politics. Nevertheless, there were cases in which I was not allowed to lecture, solely because I am Jewish and because I am Israeli. At the start of a lecture I once gave in the United States, in Florida, for example, a group of people stood up to demonstrate. I turned to those students and said, “Sit down. I’ll answer all your questions, anything you want, once my talk is done. I won’t avoid any topic you want to bring up, but first listen to the entire lecture, and let the other students hear it too.” But no. They just wanted to ruin the talk for everyone. They only stopped after I told them to go demonstrate in Syria, where children are being murdered with poison gas, because they definitely need their help over there. They were absolutely flummoxed by my response. In other words, this whole BDS phenomenon isn’t quite as naive and spontaneous as it seems.

Ostensibly, it is a very amorphous network without any hierarchical structure. They use all kinds of terms, such as “apartheid,” which can be used to denigrate people. That particular term has caught on so well that it is even being used here, in the Knesset. But what kind of apartheid are people actually talking about? We are a country struggling against challenges that no other country has to face. Our people are being fired upon. We are subjected to terrorism in our preschools and buses. Any other country would have responded in the most extreme manner. Look at what happened after the Sept. 11 attacks in the United States. We still have to deal with the ricochets of that war in Iraq and Afghanistan.

What we are seeing here is a movement that has tried to redefine terms derived from the liberal realm of human rights and translate them into modern anti-Semitism.

Al-Monitor:  Did we fall asleep on our watch in the struggle against delegitimization?

Berko:  It is quite clear that all of these movements have been operating like this for the past five or six years at least. It is also obvious that we must go and investigate their sources of funding, in Israel and abroad. I think that a lot of money is being poured into it. There are a lot of economic interests involved, including those of countries such as Qatar. We are only just starting to understand that here. Lots of Knesset members have joined our lobby. It is just too bad that the Joint List and Meretz won’t join us in our struggle.

I think we should investigate what is hiding behind the BDS movement. It is a subversive movement and a form of terrorism. It is just like suicide bombings. In some of my early studies, I argued that suicide bombing would become a legitimate weapon and be turned against Muslims. People thought that I was crazy. Now, however, we can see that the people who make up the most victims of suicide attacks are Muslims in Iraq and Syria. It is a pattern. The BDS movement against Israel is also a weapon. It is a form of terrorism and it should be fought against just like we fight against terrorism. Ultimately, whatever started with the Jews and the State of Israel didn’t end with them. You just need to use your imagination.

Al-Monitor:  Did you really think that Knesset member Haneen Zoabi of the Joint List would join your struggle?

Berko:  I actually did approach Haneen Zoabi. I think that it is in their interest, too. Personally, I am outraged when people choose to get up and leave during the singing of the national anthem [a reference to some Arab Knesset members who left the plenum when the Israeli anthem was played]. In so many places around the world, minorities get up and show respect to the anthems of their respective countries, instead of getting involved in all sorts of unnecessary provocations.

As for the Meretz Party, I have a hard time understanding that. After all, we are fighting against pure, unadulterated anti-Semitism. It may have changed its form, but it still comes from the same Europe that was a hotbed of classic anti-Semitism and blood libels. Once again, they have found a new way to attempt to revile the State of Israel, which has been turned into a loathsome pariah. They did this to the country that sent people to Nepal [a reference to the Israeli aid after the earthquake], all out of a sincere desire to help and to give. It is too bad that nations have such a short memory.