Iraq's Ministry of Industry has been unable to pay workers' salaries for several months, placing an even heavier burden on an already sinking industrial sector. 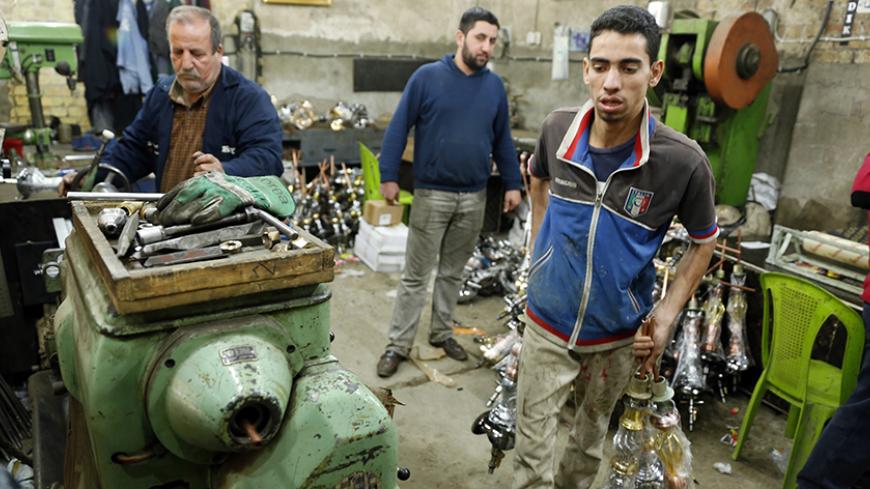 Workers are pictured at a shisha manufacturing factory in Baghdad, Dec. 17, 2014. - REUTERS/Thaier Al-Sudani

BABIL, Iraq — Since February, mechanical engineer Faiz al-Sultani has gone without a salary. The government textile plant in Hilla has been unable to pay his wages due to Iraq's fiscal deficit.

Dozens of textile and fabric shops are located in the local market of Hilla, 62 miles south of Baghdad. “The products of the Hilla textile plant used to flood the market with the finest fabrics in the 1980s and 1990s, bringing in profits for the Iraqi provincial councils' budget,” said Sultani. “Today, the plant was forced to temporarily lay off its workers, including engineers and laborers. This came after it was unable to update its machinery and cover the cost of production and labor, becoming more of a consumer than a producer.”

As a result of these dismissals, plant employees held a demonstration Jan. 19, demanding their salaries be paid. A report published by the Worker-Communist Party of Iraq on Feb. 16 said that more than 24,000 workers in Babil had not received their salaries for the fifth month in a row.

Plant worker Saad al-Khafaji showed Al-Monitor a picture of himself standing behind a textile machine, dating back to the mid-1990s. Khafaji said that he has “spent 20 years in service, and now I am being thrown by the wayside.”

Workers have demonstrated in several Iraqi cities, including Basra, Sulaimaniyah and Babil. In Diwaniyah, workers renewed their demonstrations at the city's textile plant April 26, demanding the Ministry of Industry pay their salaries.

Former employees of Iraq’s Military Industry Commission have also protested the nonpayment of wages. The commission, dissolved after the 2003 US invasion, manufactured weapons and machinery for the Iraqi army. Workers in Karbala also demonstrated Feb. 1, protesting their lack of payment. These workers had been assigned to various government industrial projects following the dissolution of the Military Industry Commission.

Kahtan Kaeal al-Sultani, senior engineer at Al-Fao General Engineering Company, which is affiliated with the Ministry of Construction and Housing, told Al-Monitor, “Many self-funded factories in Iraq became unprofitable. They were no longer producing and could not even pay the salaries of their employees and workers.”

Kaeal Sultani attributed this to “the old machinery and equipment, and the fact that it was not updated. This led to the collapse of production in many plants.”

Kaeal Sultani also said that Iraq's industrial production has been disrupted due to political reasons. “Some influential politicians own import companies, and it is not in their interest to support the industrial sector in Iraq," he said. "In addition, neighboring countries, such as Iran, Turkey and Jordan, seek to keep Iraq underdeveloped in order for it to remain a market for their goods.”

Al Sumaria News published a July 2013 report stating that, among the reasons for the collapse of factories in Iraq post-2003, was the looting of factories and plants by local gangs.

Muayad Jamal al-Din, vice chairman of the Iraqi Federation of Industries, said that industrial production in Iraq is disappearing. He told Al-Monitor, “Industrial production has deteriorated after 2003, and in 2014 it only supported 1.3% of the gross domestic product.”

Al-Monitor visited industrial plants located on the outskirts of Hilla, where Saadi al-Khafaji — no relation to the above Khafaji — owns a plant that manufactures abayas and head scarves for women. “Many plants have been unable to produce as a result of the absence of governmental protection for local production," he said. "This led to the market being saturated with goods imported from abroad.”

“Chinese and Turkish products are much cheaper than domestic goods, resulting in a depression in sales of the latter,” he said, adding that “power outages and a scarcity of fuel are two factors that still constitute a reason for the disruption of production.”

Ghassan al-Jazairi, a merchant from Babil, was surprised when his industrial project did not succeed due to the nature of the Iraqi market. “I established a company for packaging dates using modern methods, and had expected it to succeed," he said. "However, I was shocked to discover that dates imported from Jordan, the Gulf states and Iran were flooding the markets at lower prices,” despite Iraq being a top date-producing country.

Suhaila Abbas, a member of the Babil provincial council, told Al-Monitor, “All of Iraq’s provinces are awaiting oil returns to pay their expenses. There is only slight self-financing from industrial and agricultural production.” Abbas’ statements confirm the content of a May 2015 report issued by Wasit province announcing its “inability to pay the salaries of government employees.”

The same thing is occurring in the Diwaniyah province, which declared bankruptcy May 9 due to a lack of financial funds from the 2015 budget.

Engineer Fadel Falih took Al-Monitor on a tour of the sugar plant in Babil, which opened Feb. 9. “The opening of this plant is an important event," he said, "in light of the absence of strategic industrial projects in Iraq due to the state’s preoccupation with the successive wars that hit the country since the 1980s.”

“The impoverishment of industrial production in Iraq in inevitable, given that plants have surpassed their presumed lifespan and not been updated,” he said. “Iraqi plants, despite their total collapse in production, suffer from a surplus of workers. The Hilla textile plant could be operated by about 500 workers, but today it employs more than 3,000 due to poor planning and administrative bureaucracy.”

“The key to finding a solution for financing provincial budgets," said Falih, "lies in advancing the industrial sector, after security and stability is provided, as this will create an environment suitable for investment. Next it is necessary to update old plants. This will increase production and [help] eliminate unemployment, fulfill the market’s need for goods and allow for exporting abroad.”