The Iraqi government is paying huge sums to help Iraqis travel abroad for medical treatment instead of allocating money to improve health care in the country. 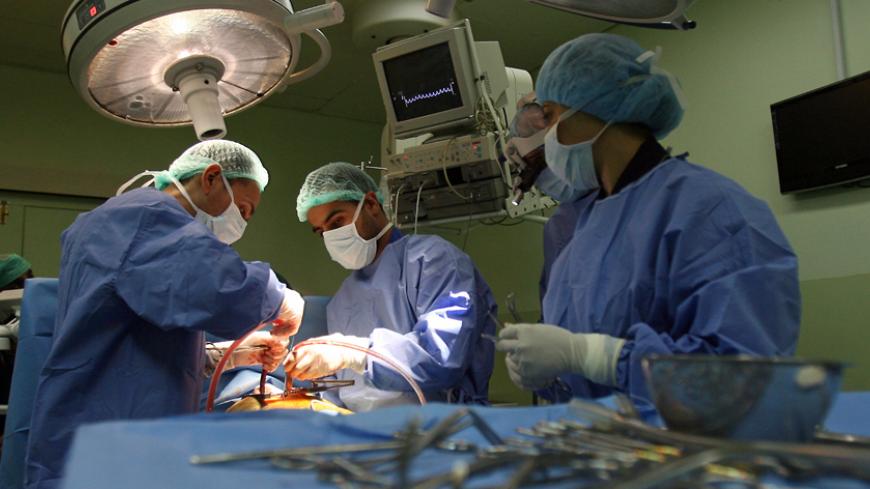 Surgeons operate on a patient at the Ibn Bitar Hospital for Cardiac Surgery in Baghdad, July 9, 2011. - ALI AL-SAADI/AFP/Getty Images

The coordinator of a consulting firm specializing in providing medical treatment in India announced Nov. 15 on his Facebook page that he was coming to Iraq and provided his phone number so people could contact him and make arrangements for medical treatment. Al-Monitor tried calling on numerous occasions, but no one answered.

In the midst of a medical crisis forcing Iraqis to travel to various countries, most frequently India, to receive treatment, Iraqis have lost faith in the country’s medical services, which they see as lacking adequate technologies and thus proper care. They are therefore seeking treatment abroad in neighboring countries, including Jordan, Iran and Turkey. Indian hospitals, however, are the big winners in the competition to woo patients, due to their lower cost, followed by facilities in eastern European countries.

Although Iraqis have valid reasons for seeking treatment abroad, the sector providing it is full of corruption, most notably favoritism. An administrator at Hilla General Teaching Hospital who requested anonymity told Al-Monitor, “Doctors have received financial compensation in exchange for granting patients reports indicating their need for treatment abroad, despite the fact that their medical condition did not require it.” According to the administrator, “Private offices calling themselves treatment-abroad consulting firms have established extensive networks with specialists and private and state hospitals to amass profits at the expense of the truth.”

Young Mou’mil al-Khafaji from Babylon published a picture of himself on Facebook and asked his friends to “pray for his recovery from ‘kidney failure,’” which Iraqi doctors diagnosed him as having. His father, Makki al-Khafaji, told Al-Monitor in a phone interview, “It was not my intention to travel to India for medical treatment, but social pressures drove me to seek confirmation of [my son’s] condition and forced me to pursue treatment abroad. The process was easy. Dozens of people traveled there before me and supplied me with the names of consulting firms and translators. [They] find patients for foreign hospitals, which they actively promote.”

Saeed Moheisen from Karbala is one of many Iraqis planning to travel abroad for treatment in India. He told Al-Monitor, “After comparing the costs of a knee replacement, I chose Apollo Hospital in the Indian capital, New Delhi, as it charged half the $10,000 price of a Jordanian hospital.”

Given the hundreds of advertisements and posters that dot Iraq's cityscapes and social networking sites offering services for medical treatment abroad, one can infer that the medical tourism phenomenon has mutated into a commercial endeavor reeking of illegal or questionable profiteering. Yet, the state is encouraging these practices by allocating funds to finance the treatment abroad of cases lacking adequate local avenues for care. After medical consultations to determine whether a case is particularly difficult, a committee decides whether the afflicted person should receive state funding for treatment elsewhere.

Baghdad International Airport employee Abbas al-Sultani told Al-Monitor, “Flights to India in particular are in great demand by people seeking treatment there. There is one flight that departs Baghdad daily to India, and most passengers on that flight are seeking medical treatment.” Abbas said that his assertion was based on “passenger statistics and daily observation at the airport.”

Kazem Shaker, a doctor from Babil, attributes Iraqis' rush to seek treatment abroad to “their lack of confidence in the Iraqi medical sector.” In an interview with Al-Monitor, he said, “Even if the medical diagnosis were correct, and the available treatments adequate, people would remain unconvinced as a result of popular propaganda in favor of traveling abroad.”

Shaker further said that bolstering this feeling was the “collapse experienced by the Iraqi medical sector since the 1990s as a result of successive wars and the decline in the numbers of Iraqi specialists since sectarian violence erupted in 2003.” He believes, “Above all else, the state must fight the [medical tourism] phenomenon instead of encouraging it by espousing the slogan of ‘treatment at home is best’ and preparing the infrastructure for that.” Shaker cited “kidney failure, organ transplant, cancer, open heart surgeries, tumors, coronary artery transplant surgery and spinal deviations” as among the diseases considered difficult to treat​ in Iraq.

Halim Hassan, from Najaf, told Al-Monitor, “Bribery plays an important role in obtaining financing for treatment abroad.” He claimed, “An intermediary demanded $500 to arrange for [my] trip abroad.”

As news spread about the rampant corruption in obtaining approval for treatment abroad, the Ministry of Health felt compelled to defend its “Treatment for Iraqis in India” program and deny any issues. The ministry spends millions of dollars a year on treatments abroad. Given this, Hassan said, “It would have been better to spend these exorbitant amounts on building hospitals and medical facilities.”

Latif Hassan, a sociologist from Najaf looking into the growing phenomenon of local residents seeking treatment in India, told Al-Monitor, “Promoting treatment abroad is a deliberate campaign to undermine and belittle national health services at the hands of companies and offices making huge profits from their investments in the sector.”