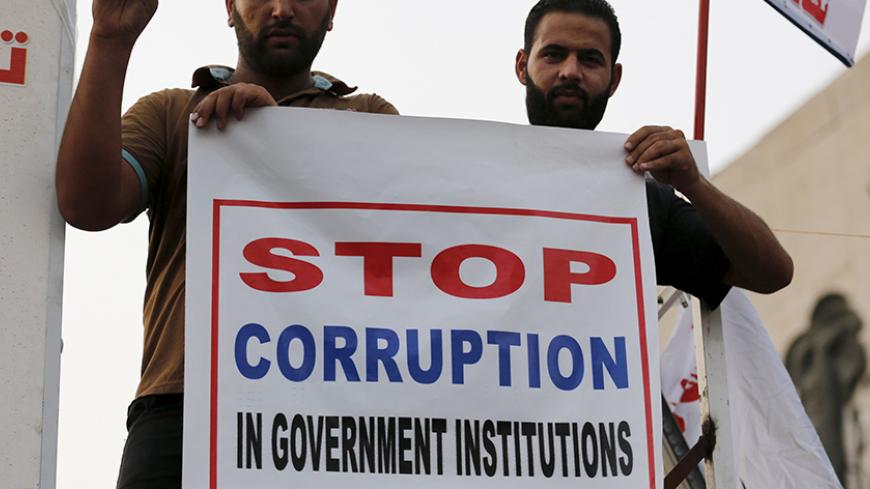 Iraqi men hold a banner as they take part in a demonstration against corruption and poor services in regard to power cuts and water shortages, at Tahrir Square in central Baghdad, Iraq, Aug. 7, 2015. - REUTERS/Thaier Al-Sudani

BABIL, Iraq — With shocking innocence, Ali al-Sultani from Babil, a city 100 kilometers (62 miles) south of Baghdad, told Al-Monitor what he does to have official documents dealt with in state agencies.

“I often carry large sums of money and hand them over to employees in the state agencies, where I go to take care of my affairs such as transferring the ownership of a property, obtaining civil status cards for my children or amending their school grades,” Sultani said.

Sultani does not consider what he is doing “bribery,” but described it as “a token of gratitude for the employee who gives me special assistance.”

Bribery is considered morally wrong in Iraq, and it is against the law and social and religious norms. For this reason, the word “bribery” is often replaced with less offensive terms that legitimize the act.

Sociologist Ali al-Khafaji told Al-Monitor, “Bribery has become commonplace in Iraq, and it is covered up with justifications or special arrangements.” He added, “Many Iraqis have grown accustomed to visiting a [state agency] employee at home or in an agreed-upon place to give him a commission for expediting an administrative procedure and overcoming legal obstacles."

Another Babil resident told Al-Monitor on condition of anonymity, “I got my driver’s license while sitting at home, after paying $600 to an employee in the traffic police department.”

The Commission of Integrity confirmed the extent to which bribery is present in Iraqi state agencies in a statement it issued Feb. 1: “Offices in Baghdad that issue driver's licenses top the list of bribed parties. There are indications of bribery in all state agencies, and these acts exceed 3% of the [regular] administrative transactions.”

To test the phenomenon of bribery, Al-Monitor met with a retired employee who was willing to help in obtaining a passport; he asked for $400 to “spare us the hassle of waiting for months as well as the trouble of [filling out] papers.”

Journalist Alaa Kouly told Al-Monitor, “Bribery has become the key element of state transactions, and it no longer has a social stigma [attached to it] or is considered a misdemeanor.”

In his opinion, this is due to a lack of “legal accountability.” He said, “Everyone is bribed, even security men and legal officials who are supposed to fight this phenomenon.”

Political analyst and writer Ali Mared al-Assadi told Al-Monitor, “Bribery has become a part of general culture in Iraq, although the term is replaced by others such as 'gift' or 'contribution.' Not many people condemn it or refrain from engaging in it, especially after 1990 when [state agency] employees’ salaries plunged following the war with Kuwait and the economic blockade on Iraq during the 1990s.”

On the one hand, employees and officials abuse their political positions and employment to make money illegally. On the other, citizens are pressed and resort to bribery to get paperwork done quickly. What other option does a citizen whose legal papers require the signature of a state employee have?

A report issued by the Commission of Integrity on Dec. 5, 2014, stated, “The General Commission for Taxes in Najaf tops the list of most bribed departments in Iraq.”

Perhaps bribery is not a new practice in Iraqi society and the Arab world, and it was a reason behind the Arab Spring revolutions; but in recent years, it has turned into a widespread phenomenon. Civil and media activist Hasanein Ali told Al-Monitor, “It [bribery] is a disease plaguing Iraqi society’s structure. It has even reached [the level of] the medical secretaries in private clinics. It is enough to offer a sum of money to move up a doctor's appointment and avoid the long waitlist.”

For his part, Ali said, “It can only be eradicated by educating and raising a new generation that thrives on human moral values.”

Cleric Muhammad al-Yasiri from Babil told Al-Monitor, “The role of religion in society must be fostered to fight bribery and corruption.” Yasiri called on preachers in mosques to “cooperate with the citizens and reiterate that God has forbidden this vice that leads to the downfall of society.”

He said, “Bribery in Islam is one of the great vices, and whoever practices it is cursed by God.”

Moreover, Iraqi Penal Code 111 punishes those charged with bribery with up to 10 years in prison.

Since Aug. 9, protesters have taken to the street to condemn the corrupt politicians and government officials. Civil activist and writer Hadi al-Husseini told Al-Monitor, “These protests will not eliminate corruption — mainly bribery — because everyone is practicing these acts. At the forefront are high-level officials who buy and sell in their ministerial or otherwise important positions.”

What do Iraqis want then? In principle, they want improvement of their livelihoods, implementation of social justice, resumption of political reform and accountability of those who bribe. This will constitute the first steps to eliminate bribery, which has become rampant in Iraqi society, where the strong prey on the weak.