The Gulf states are concerned about the growing influence of Shiites in neighboring countries, expressing their fears of the relations established between the Shiites of Iran and Iraq and their own Shiite communities. 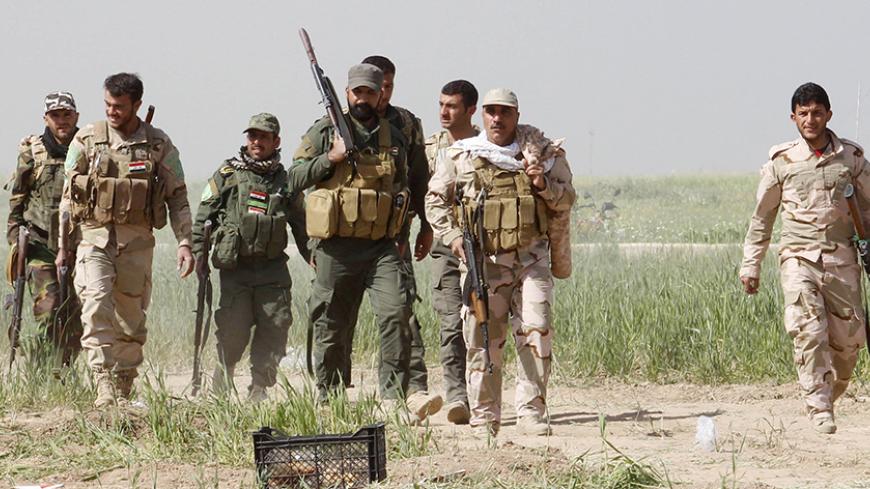 Shiite fighters from the Popular Mobilization Units walk with their weapons at the front line at the Shiite Turkmen village of Bashir, south of Kirkuk, March 14, 2015. - REUTERS/Ako Rasheed

Graham E. Fuller, an American author and political analyst who specializes in Islamic extremism, published in 1999 a book titled “The Arab Shi’a: The Forgotten Muslims,” in which he focused on the Shiite communities in the Arab world, from the Gulf states to Iraq, Lebanon and Yemen. Today, Arab Shiites are no longer ignored, as they were throughout the long history of the region, thanks to the rise of the Shiite political identity in Iraq, establishing a bridge between Iranian and Arab Shiites.

Given the geopolitical situation of Iraq, Iraq's Shiites have long-standing historical ties with Iran’s Shiites on one side, and with Arab Shiites in other Arab countries, such as Kuwait, Bahrain and Lebanon, on the other.

The most important and oldest Shiite religious institution, the Najaf seminary south of Baghdad, brings together Shiite clergy from the Indian subcontinent to Iran and the Arab world.

The Shiites of Iraq have close relationships with the Gulf states, mainly Kuwait and Bahrain, given the historical neighborly relations between them and their common affiliation to the most prominent Arab clans and tribes, such as the Rabiah and Khaz’al tribal groups.

This major force poses a significant challenge to the Sunni regimes in the Arab world, especially in the countries neighboring Iraq and Iran. The challenge is not only limited to religious differences, as the rise of sectarianism within competing political projects between Iran and Saudi Arabia led to the collision between these regimes and their Shiite components.

The "Saudi Cables," which were made public June 19 by WikiLeaks, revealed the concerns of the Arab regimes — including the Gulf states and particularly Saudi Arabia — of the rise of Shiite identity in the region. The leaks also revealed concerns about the connections between the Shiites of the various Arab countries and those in Iraq and Iran.

According to the leaks, Crown Prince Mohammed bin Zayed Al Nahyan of the United Arab Emirates had informed US Secretary of Energy Ernest Moniz on Dec. 17, 2009, that Iran is establishing Shiite emirates in various regions of the Islamic world, from southern Lebanon and the Gaza Strip to the Gulf states and Yemen.

In another document dated April 9, 2009, UAE Minister of Foreign Affairs Sheikh Abdullah bin Zayed revealed that Saudi Arabia fears Asif Ali Zardari’s ascent to the Pakistani presidency, since he is a Shiite and will seek to create a Shiite triangle with those of Iran and Iraq.

The documents in general show that the Shiite political force, headed by Iran, is a major concern to Saudi Arabia and most Gulf states. Moreover, they focus on the connection between the Shiite communities in the Gulf region with their counterparts in Iran and Iraq.

Concerns rose substantially after the crisis in Yemen. It seems from these leaks that the Gulf states feel that the risk of Shiite alliances forming is knocking on their doors, especially with the Shiite Houthis fighting Saudi Arabia and its allies in Yemen. The Gulf media widely published propaganda against Shiite alliances aiming to restrict relations between the Shiites of the Gulf and the Shiites of Iraq and Iran. It seems that the purpose behind this move was to safeguard the last impregnable fortresses against Shiite extension, according to the Gulf view.

On June 11, Al Khaleej published a report indicating that when the Shiites of the Gulf make religious visits to Iraq, they find themselves pushed to join the Shiite militias of the various parts of the region. On its website, the news outlet claimed that a systematic campaign is led by the Shiite communities in Najaf to attract the Gulf Shiites to go to Iraq and participate in religious pilgrimages leading to their integration in militias managed by Iran. This campaign aims to deploy these militias in the various Arab countries to spread instability and implement Iran's regional policies. The report also confirms the control of Iranians over the various sectors in the city of Najaf and the exploitation of Shiite religious shrines and institutions for political purposes linked to Iran.

However, Al-Monitor did not find any evidence in the city of Najaf to confirm these allegations. The publication of such reports has led to more restrictions on Shiites in some Gulf countries, to discourage or prevent them from visiting Iraq. Zainab, a Bahraini university professor who preferred not reveal her full name, told Al-Monitor that Shiite visitors often face interrogation and prosecution by Bahraini officials after their return from Iraq.

The concerned Gulf states are unable to properly deal with the Shiite communities in their country because of the policy of "non-openness" toward the Shiites of Iraq after the fall of Saddam Hussein in 2003. This restricted policy toward Shiites paved the way for Iran to interfere in Iraq and expand in the region, under the pretext of assistance and support for Shiites, and led to the loss of trust between the Shiite communities and the Gulf states.

The Gulf militancy against the moderate Shiite parties and communities in the Gulf aggravated the situation in favor of Iran’s agenda and the groups associated with it. In this context, a conviction was issued June 10 for Ali Salman, the secretary-general of the Bahraini Al Wefaq Party — known for its patriotic and moderate speech — ordering his imprisonment for four years on trumped-up political charges, according to Human Rights Watch, which demanded his immediate release.

On March 27 from his prison cell before the start of his trial, Salman urged his supporters to commit to peaceful means of protest and stressed that his party has no demands other than abiding by the constitutional regime of the kingdom.

Recent years' developments show that the Sunni regime’s ongoing marginalization policies against Shiites are useless and aggravate the situation in favor of Iran. These regimes have to conduct a comprehensive and in-depth planning for the integration of the Shiite communities in their societies and give these communities equal rights and dignity, as well as a sense of belonging to their countries.