Progress on Yemen slow but not dead

The Geneva talks ended without results, but many hold that the real achievement was getting the sides to talk for the first time in months, perhaps allowing the international community to intensify mediation efforts. 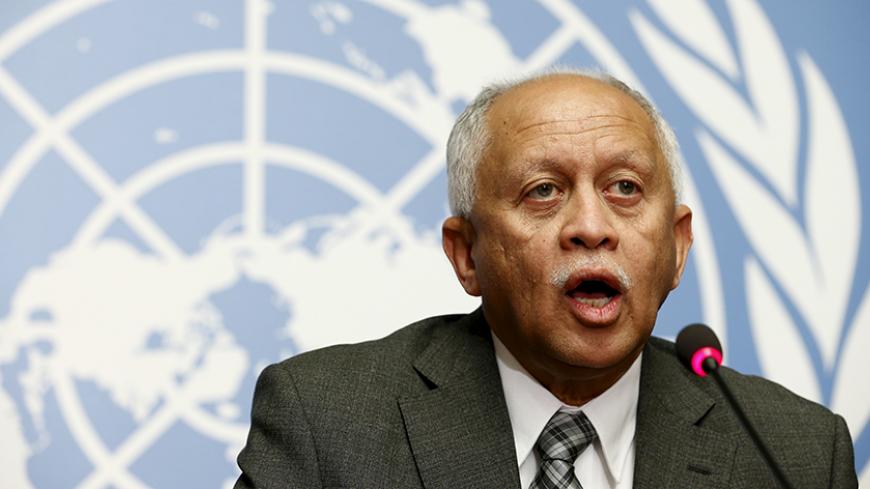 Yemen's Foreign Minister Reyad Yassin Abdulla speaks to the media during a news conference by the Mission of Yemen in Geneva, June 17, 2015. - REUTERS/Pierre Albouy

After the failure of Yemen’s Geneva talks, many are fearful that the three-month-long assault might turn into an endless war that could affect the shaky security of the region.

Along the borders between Yemen and Saudi Arabia, the Houthi Ansar Allah militants are launching short-range missiles on Saudi towns and villages, while dozens of fighters are reported to have attacked the cities of Najran and Jazan on several occasions. The fact is that Ansar Allah started its war of attrition against the northern neighbor, while the latter insists that Yemeni President Abed Rabbo Mansour Hadi can only be restored militarily.

“In Geneva, the Saudis’ bottom line was Ansar Allah’s surrender. They wanted to disarm the group, to take control over the cities and to restore Hadi,” a Houthi activist told Al-Monitor on condition of anonymity. “It’s easier to turn down surrender offers than surrendering while your people are being killed. We decided we’ll continue in our struggle for a free Yemen whatever the price.”

It’s true that the talks ended without results, but the common understanding is that the real achievement was getting both sides to the table for the first time in months. The first round of consultations ended without deciding on the next round, but both sides were able to draw their red lines in front of the international community, which might be able to take it from there and start tailoring mediation to reach a certain consensus. Another important point is that both regional backers of the Yemeni sides, Iran and Saudi Arabia, might be brought together for effective consultations.

"Geneva is a good start, yet there's a need for the Saudis to understand they aren't going to gain anything by the continuous bombing of Yemeni cities,” said an Iranian official in an interview with Al-Monitor. “This message was conveyed directly to the Saudis." According to the source, who wished not to be named, Iran believes that reaching a settlement between various Yemeni factions will open the road for a new independent Yemen “if the Saudi-backed factions in Yemen accept the fact that their country should be independent from Saudi influence. Then there’ll be a chance to reach a deal. A new Yemen will mean more development and less exploitation, and this will be reflected in the policies of the country and its future.”

The Iranian official revealed that Iran advised Ansar Allah on several occasions to keep its response to the Saudi attack to a minimum in order not to lose the chance for a settlement with Riyadh. “Ansar Allah is strong enough to launch rockets inside Saudi Arabia. It is capable of striking inside, yet this will only make things more and more complicated. Today on the ground they have the upper hand and they are ready to share power with other Yemeni factions. Therefore, the best way is via talks, and we are ready to help ease the diplomatic track if we are asked to.”

On June 17, Iran’s Deputy Foreign Minister Hussein Amir-Abdollahian met Saudi Foreign Minister Adel Jubeir on the sidelines of a summit of the Organization of Islamic Cooperation in Jeddah. According to an official Iranian statement, the two officials discussed the volatile situation in the Middle East, mainly in Syria, Yemen and Iraq. The Iranian official stressed that the military approach in the region is counterproductive and that dialogue and effective cooperation are the most important ways to resolve conflicts and restore stability.

Iran and Saudi Arabia are believed to be involved in a proxy war in Syria and Yemen, on opposite sides in Lebanon and Bahrain and of different points of view on how to solve the crisis in Iraq.

The Iranian official told Al-Monitor that a possible change in tactics might come if the negotiations prove to be hopeless. “Oman right now is leading a new initiative for a solution in Yemen," he said. "They are trying to come out with a solution that can make all sides content. It’s difficult, but any other options might lead to worse scenarios. The Saudis are trapped in the mud in Yemen. They have been bombing for three months without any serious change on the ground, and they’ll strike for another nine months without any results, while today Ansar Allah is on the borders with a minimum strength. What if it decided to go to the next step?”

Saudi Arabia has accused Iran on several occasions of being behind the rise of the Houthis in Yemen, given that both belong to the Shiite sect. Iran and the Houthis deny these allegations, each claiming that the Saudis and their Yemeni allies want to enhance the kingdom’s influence over its southern neighbor.