Despite recent calls for Egypt to abolish capital punishment, getting rid of the death penalty is no simple matter. 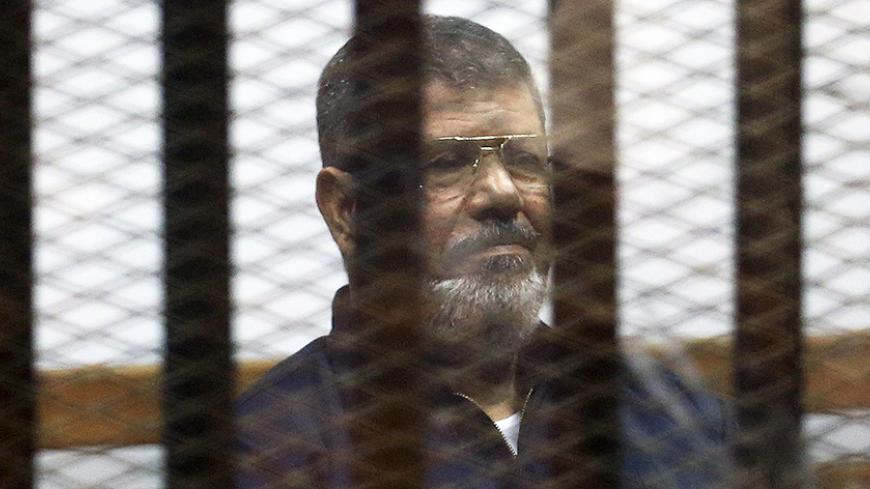 Mohammed Morsi listens to his verdict behind bars at a court on the outskirts of Cairo, June 16, 2015. - REUTERS/Asmaa Waguih

Egyptian rights activists are demanding the abolition of the death penalty following what they described as “the expansion of death sentences in Egypt” — and as foreign countries and international human rights organizations such as Human Rights Watch leveled stinging criticism against the Egyptian judiciary.

It began when the military court in Egypt issued a final ruling in March, sentencing to death six persons charged with murder and belonging to Ansar Bayt al-Maqdis. This case became known in the media as the Arab Sharkas case.

In addition, the Cairo Criminal Court issued a decision May 16 to refer the case files of ousted President Mohammed Morsi and more than 100 other defendants to Grand Mufti Shawki Allam for consultation on whether they should be executed in a case known as the escape from Wadi Natrun Prison case. Morsi, along with other leaders and members of the Muslim Brotherhood, are accused of breaching Egyptian prisons and smuggling out some prisoners. While the court was expected to issue its final ruling June 2, it decided to postpone the ruling to give more time for the court to debate the matter. The court confirmed the death sentence for Morsi on June 16.

Against the backdrop of the aforementioned death sentences and the referral to the Grand Mufti, as well as previous death sentences — most notably the death sentences handed to 37 persons accused of murder and inciting riots in Minya — George Ishaq and Abdul Ghaffar Shukr, two members of the National Council for Human Rights, issued press statements calling for a halt to issuing death sentences in Egypt for at least three years to give time for the security and political situation to improve. They noted that they preferred permanent abolition.

Meanwhile, Abdel Moneim Aboul Fotouh, a defected Brotherhood leader and the chairman of the Strong Egypt Party, issued a statement last month calling for the abolition of the death penalty as soon as possible.

The calls to suspend or abolish the death penalty were met with criticism from some of the families of victims of terrorist attacks. The National Council for Human Rights issued a statement in which it rejected the calls of members Ishaq and Shukr, announcing that it had not discussed suspending or abolishing the death penalty in Egypt, rather only demanded it be restricted to very serious crimes.

Following the numerous death sentences in Egypt, such as the Minya sentences and those from the Arab Sharkas case, some human rights organizations — most notably Human Rights Watch — said that they considered death sentences as a tool used by the Egypt regime to expand the oppression of its opponents. However, there are other reasons for maintaining the death penalty that are hard to ignore such as the Egyptian Constitution, Sharia, security concerns and the condemnation of criminals by those whose relatives have been murdered.

According to Article 2 of the Egyptian Constitution of 2014, the principles of Sharia are the main source of legislation in Egypt. Speaking to Al-Monitor, Mahmoud Kabish, a law professor at Cairo University, said that abolishing the death penalty is incompatible with the principles of Sharia, which allows for the execution of murderers based on the religious rule saying “whoever kills shall be killed.”

Abbas Shoman, a representative of Al-Azhar, told Al-Monitor that amending the Egyptian penal code to abolish the death penalty is a legal matter that concerns the state, and Al-Azhar will not interfere unless its Sharia-based opinion on the issue is requested, which in that case would only be a recommendation. Regarding the Sharia-based opinion and the extent to which abolishing the death penalty complies with the principles of Sharia, Shoman said that its abolition is incompatible with the principles of Sharia, as noted by Kabish.

It is worth noting that the National Council for Human Rights raised the issue of abolishing the death penalty in a 2010 report sent to the Egyptian government and parliament. However, a large number of Al-Azhar scholars rejected the Council’s report, and it was likewise rejected by then-Minister of State for Legal Affairs Mufid Shehab and the Human Rights Commission of the Egyptian parliament.

Khaled Okasha, a retired Egyptian military general and chairman of the National Center for Security Studies, said that the death penalty is the only punishment deterring murderers, and replacing it with life imprisonment could bring about security unrest in Egypt. “Someone who has been sentenced to life in prison could commit crimes from inside prison, because he is transformed into a hopeless person, and life imprisonment is the maximum penalty he could face regardless of the crimes he commits,” he added.

Khaled al-Badr, professor of social psychology at Cairo University, told Al-Monitor that those sentenced to life in prison become desperate people with nothing to deter them. “This could be a reason for them committing more crimes from within prison, because they will not be seeking to improve their behavior to shorten the sentence, as other prisoners do. They also will not seek to avoid committing new crimes, because they realize that they will not leave prison anyway,” he said.

Eid Salama, the father of a victim of a November 2013 terrorist attack in Egypt, told Al-Monitor that he rejects his son’s killer being given any sentence other than the death penalty. Meanwhile, Hossam Abdel Azim, the brother of a victim, told Al-Monitor that crimes of terrorism can only be stopped through death sentences, and that no other punishment can appease the families of victims of terrorist attacks.

“Egypt is not expanding its use of the death penalty," Kabish said. "Moreover, there are controls on the death penalty, most notably that it requires the consensus of all members of the court. Those sentenced [to death] have the right to appeal twice, not to mention that the presidency pardons some of them, which the president has the authority to do. Most of the death sentences issued in the recent period, like those in Minya, were in absentia. In such cases, the accused is given the maximum sentence so he can come back and be re-investigated.”

It could be argued that abolishing the death penalty is a difficult matter — not because it is a tool of the state to intimidate opposition, as claimed by human rights organizations, but rather because its abolition could be met with rejection. The latter could use constitutional, religious or humane arguments to reinforce their rejection.