Turkey's Interior Ministry now requires academics to get prior approval before conducting research on the country's 2 million Syrian refugees. 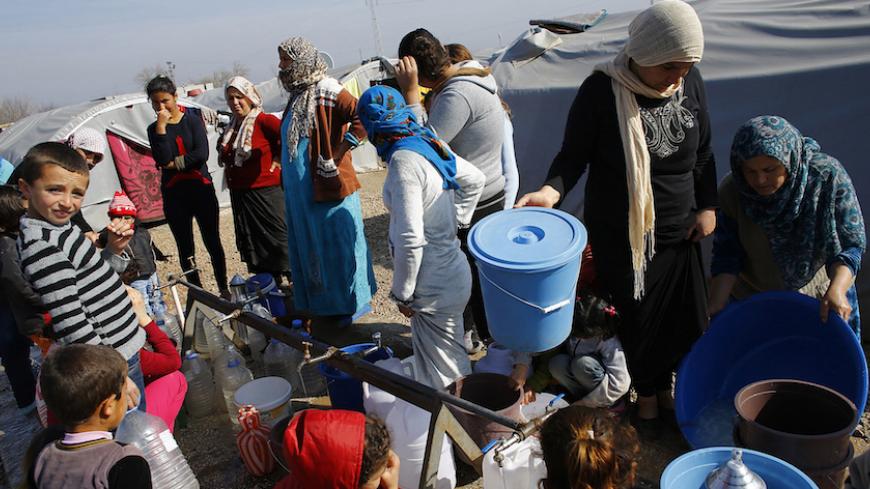 Kurdish refugees from the Syrian town of Kobani wait to fill their jerrycans around a clean-water source at a refugee camp in the border town of Suruc, Sanliurfa province, Feb. 1, 2015. - REUTERS/Umit Bektas

Turkey’s Ministry of Interior has informed academics that they need prior approval before conducting research on Syrian refugees living in the country. In a directive dated April 10 and classified as “secret,” the Higher Education Council (YOK) told teaching staff across Turkish universities that, per the ministry’s decision, they would need permission from “relevant ministries” before conducting any type of survey or fieldwork among Turkey's 2 million Syrian refugees. The ostensible reason behind the decision is to protect the refugees' privacy.

The new regulation, however, promises to be both self-defeating and pointless. The Education and Science Workers’ Union — Egitim-Sen, one of Turkey’s largest teachers’ unions — has threatened to challenge the ministry’s decision in court because it is “a blow to academic activities and freedom.” Even if the Turkish judiciary, which is becoming an extension of the government's executive branch in recent years, upholds the policy, the ban is likely to fail for several reasons.

First, it took less than a month before YOK’s supposedly “secret” letter became public. The leak of a supposed “state secret” shows how seriously some academics view the directive.

The new policy is also pointless because social researchers in Turkey have always needed permission from provincial governors to conduct opinion polls and other surveys. However, when a study involved several thousand respondents in multiple provinces, companies and researchers would ignore the rule for the sake of convenience. The latest restriction risks reinforcing the Turkish habit of state officials imposing draconian rules only for citizens to find creative ways to circumvent them.

An assistant professor at one of Turkey’s leading private universities is a case in point. Speaking to Al-Monitor on condition of anonymity, the young professor said that earlier this year, she decided to do research on Syrians living in Turkey’s border provinces outside the camps. She wanted to know more about their socio-economic status, relationships with the locals, attitudes toward integration and experiences with discrimination. The study aimed to determine the most effective social and economic programs for Syrian refugees.

With the sponsorship of a major international nongovernmental organization, the academic submitted her proposal to state authorities in January and waited for two months before she found out that her paperwork was “lost.” Interestingly enough, while bureaucrats were busy shuffling her papers, the academic finished interviewing several hundred respondents and submitted the results to her sponsor.

Why, then, would Turkish authorities bother with this charade if it’s so ineffective? According to the professor, state agencies worry about research that produces results they do not like, and so "they impose this restriction.” Even the United Nations High Commissioner for Refugees, the UN agency that is responsible for refugees, gets a hard time from the Turkish government when it tries to conduct surveys among Syrian refugees.

Part of this change in attitude comes from the changing conditions facing Syrian refugees and their Turkish hosts. Since the outbreak of the civil war in Syria in 2011, Turkey’s ruling Justice and Development Party (AKP) has boasted — justifiably — about its “open-door” policy to Syrian civilians. For the first two years, the AKP government, banking on a quick victory against the Bashar al-Assad regime in Damascus, provided state-of-the-art facilities to its Syrian “guests.” The use of the word “guest” was deliberate — the AKP government wanted to show its domestic supporters and the international community that “new Turkey” was wealthy enough to care for Syrian refugees without outside help. The New York Times called some of the camps in Turkey “perfect.”

But as the war in Syria dragged on, the number of refugees in Turkey ballooned from a few hundred thousand to more than 2 million. As more Syrians came in, conditions at the camps suffered and more refugees began to seek their fortunes outside the camps. The cumulative cost of the wars in Syria and Iraq to Turkey is estimated to be $16 billion; close to half of that figure went to caring for Syrian refugees. As such, state authorities are imposing a gag rule on researchers at a time when Turkey needs more information on the refugees.

That is not to say that the research on Syrian refugees in Turkey should go unregulated. Researchers who spoke to Al-Monitor pointed out cases of serious ethical and moral transgressions against Syrians in Turkey. In one case, pollsters allegedly tricked despondent refugees into participating in their study with promises of a monthly payroll of $500. In a more tragic case, in September a Syrian refugee reportedly committed suicide after being raped at a camp in Mardin’s Midyat district. It was not clear whether the suspect was (or was pretending to be) a researcher or aid worker, but academics believe that such cases show why oversight is necessary. But they want their own institutions to expand existing ethical review processes and the state to step in only when there is a violation of the laws.

At a time when violence against Syrians is on the rise in Turkey and there is no end in sight to the civil war across the border, integrating refugees into Turkish society is a crucial need. For several years, Turkish President Recep Tayyip Erdogan has pestered young couples to have “at least three kids” so that Turkey’s population and economy could grow. The 2 million Syrian refugees — more than a quarter of whom are children — provide the potential demographic and economic boost that Erdogan seeks. For that to happen, the Turkish state needs to provide language, vocational and cultural training to Syrians living in the country. Free, comprehensive and reliable academic work on Syrian refugees is the best route to accomplish that objective.