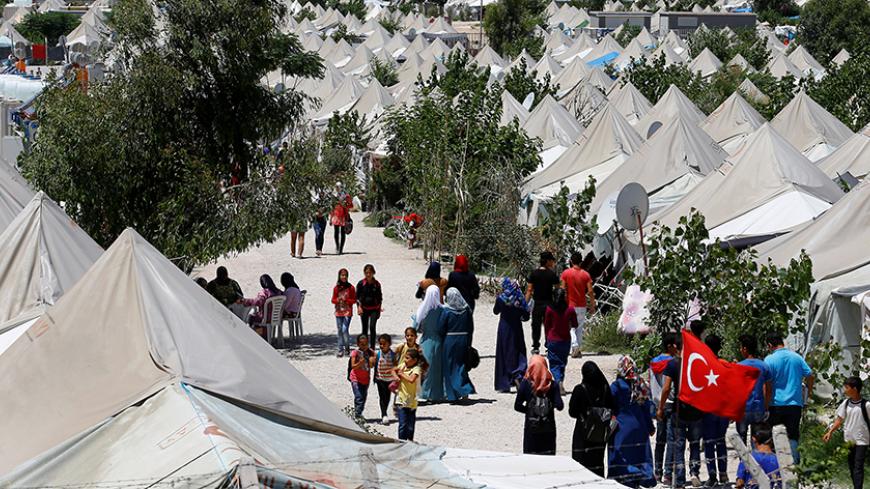 Syrian refugees walk at a refugee camp in Osmaniye, Turkey, May 17, 2016. - REUTERS/Umit Bektas

The instant reaction was a rising bias among Turks, who are paying for the country's Syria policy. Some reactions to Erdogan’s proposal were outright racist. Hate speech peaked on social media. Many asked why Erdogan — who recently blackmailed Europe by declaring, “We are not dumb. We will put the refugees in buses and ship them to Europe” — suddenly decided to grant citizenship to millions of refugees.

Others wanted to know why the government, which earlier declined to offer citizenship to Turkish kin from the Caucasus and Balkans, now decided to give the green light to a much larger group.

The best offer for the refugees would be to grant them refugee status. When Turkey signed the 1951 Geneva Convention on refugees, it put in a clause that said it would not be granting refugee status to people coming from non-European countries. This is why today Ankara offers only "temporary protection" to those coming from elsewhere.

The second-best offer Turkey could make would be to provide the refugees with decent education, housing, employment and legal protection. Today, only 256,000 refugees out of 2.7 million are living in official camps. The vast majority of others live in tenements they rent out of their own pockets. According to the International Labor Organization, only about 38% of refugee children are offered schooling.

Legal provisions that give the right of employment to refugees have been much delayed and still face problems being implemented.

It is fair to say there is some serious work to be done to integrate these refugees into Turkish society.

The third-best thing Turkey could do would be to give up its policies that incite war in Syria and instead start supporting efforts for a solution. Returning the refugees to their homes requires an end to clashes. Although there has been some recent talk of Erdogan softening his position on Syria, there are no serious indications that it is about to happen.

So what encouraged Erdogan to skip these three basic steps and directly hop to the fourth?

The prevailing opinion is that Erdogan sees a huge potential voting block among the 2.7 million Syrian refugees. There's no doubt that the 1.5 million who would qualify to vote could alter the country's political balance. Some believe that refugees, out of their sense of self-preservation, would vote for the ruling party that gave them the right of citizenship instead of supporting opposition parties that frequently question their presence.

Some think Erdogan’s proposal is linked to his intention to improve relations with the European Union. The refugees have been the core of tensions with Europe since the summer of 2015. In Europe, almost everyone believes Erdogan is exploiting the refugee flow. Since Binali Yildirim recently became Turkey's prime minister, there have been efforts to patch up relations with Turkey’s neighbors. The government, by taking action on the refugee issue, or at least giving the impression of taking action, may well be seeking a fresh start with the EU.

Europeans might be pleased by the new barrier Turkey would be putting between Europe and the refugees by offering citizenship. But it is not yet clear if Erdogan can achieve the results he hopes for from the Turkish public. All opposition parties have been sternly opposed to Erdogan’s proposal.

The first argument of those rejecting Erdogan’s proposal is that he is not motivated by humanitarian concerns, but rather wants to buttress his declining public support by using the Syrian refugees. To realize his ambition of an executive presidency, Erdogan needs stronger popular support. His numbers in that respect are on a slippery slope, even though he has been able to weaken the pro-Kurdish Peoples’ Democratic Party (HDP).

The opposition also has an economic argument. New citizens would mean a heavy new load on the national budget. The country’s acute unemployment problem would worsen. This is the view not only of the opposition but also of the ruling Justice and Development Party (AKP) voter base. But Erdogan doesn’t seem worried. At the risk of provoking outbursts of racism because of the economic burden of refugees, Erdogan did not hesitate to declare that he will have the Syrian refugees move into dwellings built by government’s Housing Development Administration.

Erdogan, by attributing a divine meaning to his refugee policies, may help soothe Islamist and conservative segments, but giving priority to the needs of refugees ahead of his own people only inflames the anger of the masses.

Those who object to granting refugees citizenship also emphasize the sociological aspects of the move. According to official figures, on average, 125 Syrian babies are born daily in Turkey. That means there have been 150,000 to 200,000 Syrian babies born in Turkey in the past five years. That kind of birth rate will inevitably affect the demographic and cultural fabric of the society. Language and cultural differences also will hinder social integration.

Another point of objection is the use of settlement policies that were designed to bring about demographic changes. Since Ottoman times, the settlement policy provided for grouping "reliable" population groups in defined areas with appropriate services, while forcibly scattering "unreliable" groups to other parts of the land. For example, the AKP government is plotting to settle Sunni Syrians in Alevi (Shiite) regions of Turkey. The idea of setting up a refugee camp for 25,000 people in an area of 16 Alevi villages drew strong opposition.

Many people also remembered the government's double standards for the refugees. For example, the AKP rule did not grant Turkish citizenship to Meshketian Turks who were exiled from Georgia’s Javakheti region to Central Asia in 1944 and who were not allowed to return.

Ali Gitmez, chairman of the Association for Solidarity with Migrants and Refugees, thinks the citizenship plan isn't motivated by humanitarianism. The government has “varying intentions to grant citizenship to Syrian refugees," he said.

"Its basis is political considerations. According to recent polls, AKP’s overall vote has declined by four to five points while the HDP’s vote has gone up. AKP needs new voters for its presidential aspirations,” he added.

The government must first give refugees the status of refugees before offering them citizenship, Gitmez said.

“Citizenship is not a solution. Telling our people that those who were first introduced as our temporary guests will now be sharing their bread on a permanent basis will cause further polarization. The government is only amplifying the problem. You can’t give citizenship to people who are on temporary protection status. It is also against UN rules. Europeans want countries like Turkey to serve as a barrier against refugees. [Erdogan] has not changed his policy of threatening Europe by saying, ‘Among these refugees there are doctors, engineers, lawyers, health personnel and teachers; they can be given citizenship.’”

With that statement, Erdogan is implying that the remaining unskilled refugees can be sent to Europe. This is his tactic in bargaining over refugees.

Whether they are "guests" or have temporary protection status, the refugees are being used as bargaining chips against the Syrian regime or the international community. Those who were once considered "useful cards" now are being promoted to "useful voters." In a nutshell, the dismissive, uncaring approach to the humanitarian aspects of the refugee issue is not changing.