How Morsi matters in Turkish politics

Turkish President Recep Tayyip Erdogan is convinced that the forces that toppled former Egyptian President Mohammed Morsi would have toppled him as well, had he not stood his ground against them. 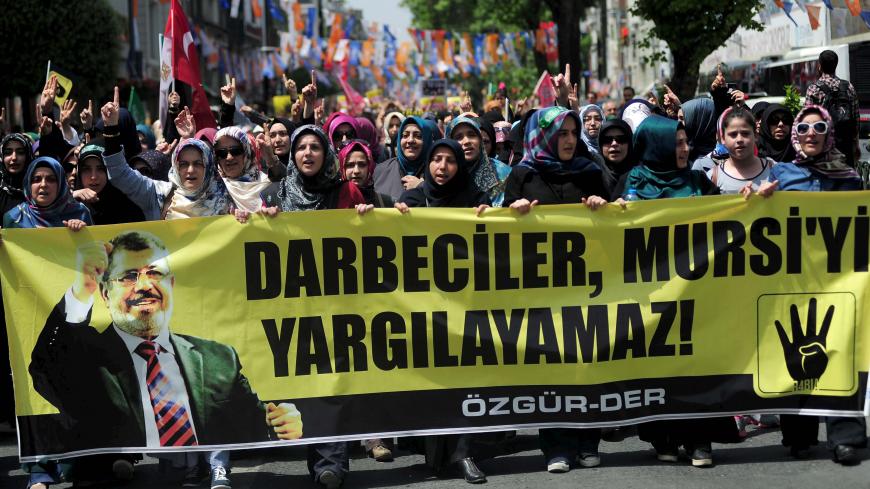 Turkish demonstrators hold a banner that reads "Coup leaders can't try Morsi" during a protest in support of former Egyptian President Mohammed Morsi in the courtyard of Fatih Mosque in Istanbul, May 17, 2015. - REUTERS/Yagiz Karahan

There is no doubt that the death sentence passed by an Egyptian court on former President Mohammed Morsi and more than 100 other defendants is “nothing but a charade,” as characterized by various human rights organizations and countries. As often is the case in dictatorships, the courts of general-turned-President Abdel Fattah al-Sisi — who grabbed power in a July 2013 military coup — are designed not to serve justice but rather to protect the regime by cracking down on opponents. That is why this death sentence, along with all other gross human rights violations by the Sisi regime (such as mass murder of peaceful protesters, political imprisonment and torture), should be condemned by the entire democratic world.

The boldest reaction to the death sentence for Morsi came from none other than Turkish President Recep Tayyip Erdogan. In a rally in Istanbul on May 16, the day the Morsi verdict was announced, Erdogan slammed not just the Sisi regime in Egypt but also the West, which he saw as complicit.

“Unfortunately, Egypt has given a death sentence to a president elected with 52% of the vote. Egypt is returning to the old Egypt. The West, unfortunately, still does not reveal its stance against the coup leader Sisi. While Western countries have been abolishing the death penalty, they are watching the death sentences in Egypt in complete silence,” Erdogan said.

Erdogan also told his supporters that, in the midst of all this injustice, “This nation [Turkey] will be the one to set the tone; that's why your stance on June 7 is very important.” He, in other words, asked his followers to vote for his Justice and Development Party (AKP) in the upcoming general elections for the sake of Egypt as well. The next day, the daily Star, one of many pro-Erdogan newspapers, underlined the connection with a banner headline: “Egypt’s fate is tied to June 7.”

These messages are not new, since both Erdogan and his AKP have been expressing solidarity with the former Morsi government and the Egyptian Muslim Brotherhood over the past three years, and especially since the June 2013 coup that toppled Morsi. For sure, this solidarity comes from the ideological affinity the AKP has with the Muslim Brotherhood — despite the fact that the AKP practices a relatively more modernized and secularized version of Islam than that of the Muslim Brotherhood. But it also comes from Erdogan’s belief that his fate and that of Morsi are somehow connected. For Erdogan is convinced that the forces that toppled Morsi would have toppled him as well had he not “stood firm” against them.

To see why Erdogan thinks like that, just recall the events of June 2013. In Egypt, the Tamarod movement began protesting against the then-incumbent Morsi, only to pave the military coup of July 3. At the very same moment, the Gezi Park protests were shaking Turkey. Like most of the Tamarod folks, Gezi Park protesters were liberal or secular people whose stance against the Islamists received some sympathy in Western media. This was enough for the AKP to link these two separate events, and to imagine a Western (and Israeli) conspiracy behind them to topple the elected Islamists in both Egypt and Turkey.

In fact, unlike in Egypt, there was no Gen. Sisi in Turkey to extract a military coup out of public protests; this, however, was irrelevant for the AKP. When the Erdogan government suffered a second blow in December 2013 with the corruption investigations that were apparently conducted by Gulenist police and prosecutors, the conspiracy theory was extended to explain this “second coup attempt” as well. “They could not succeed in Gezi, they could not succeed in Dec. 17-25, yet they are trying again,” Erdogan has repeatedly said since in the face of almost any political trouble he faced. The “they” he referred to was a vague combination of the West, Zionists, the “interest rate lobby” and secular and treacherous Turks.

That is why today the typical AKP supporter believes that his political line is the one that is attacked and the oppressed. Although Erdogan has been in power for 13 years, and has accumulated power unprecedented since the time of Ataturk, the oppression of the Muslim Brotherhood in Egypt provides him and his supporters a strong sense of victimhood. As a result, they completely disregard opposition views that the AKP is the real oppressor and that the opposition is the truly oppressed.

Meanwhile, the Turkish opposition is trying to both oppose the AKP’s “partisan” Egyptian policy and also to avoid looking sympathetic to the military regime of Sisi — something that the AKP constantly blames the opposition for. As a case in point, Kemal Kilicdaroglu, the leader of Turkey's main opposition Republican People's Party, called on Cairo to stop “political executions” but also criticized Erdogan for “taking sides.” Kilicdaroglu vowed, "When we form our government, we will respect all parties in Egypt.”

A more nuanced criticism of Erdogan and the AKP is that their passionate support for the Muslim Brotherhood does not help the latter; it only helps in flexing AKP muscles at home. Some foreign policy observers have also criticized the AKP for encouraging their Egyptian comrades to follow a triumphal course in the aftermath of the Arab Spring, only to stir the old establishment and pave the way for the coup. Indeed, the Muslim Brotherhood was wary about competing in the Egyptian presidential elections, but the AKP encouraged the Brotherhood to do so — to its peril.

In any case, whatever happens in Egypt continues to be a key matter in Turkish politics as well. However, most Turks, including the AKP supporters, actually don’t know much about the complexities of that distant Arab country. What they rather do is to project their own political ideologies and sentiments onto it.